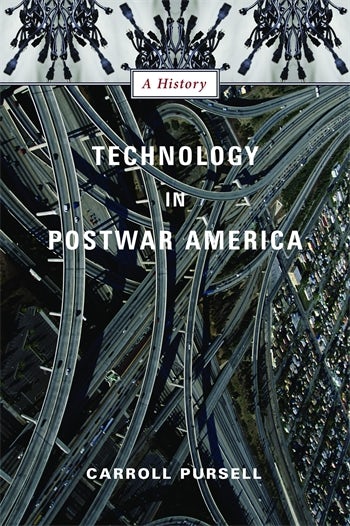 Carroll Pursell tells the story of the evolution of American technology since World War II. His fascinating and surprising history links pop culture icons with landmarks in technological innovation and shows how postwar politics left their mark on everything from television, automobiles, and genetically engineered crops to contraceptives, Tupperware, and the Veg-O-Matic.

Just as America's domestic and international policies became inextricably linked during the Cold War, so did the nation's public and private technologies. The spread of the suburbs fed into demands for an interstate highway system, which itself became implicated in urban renewal projects. Fear of slipping into a postwar economic depression was offset by the creation of "a consumers' republic" in which buying and using consumer goods became the ultimate act of citizenship and a symbol of an "American Way of Life."

Pursell begins with the events of World War II and the increasing belief that technological progress and the science that supported it held the key to a stronger, richer, and happier America. He looks at the effect of returning American servicemen and servicewomen and the Marshall Plan, which sought to integrate Western Europe into America's economic, business, and technological structure. He considers the accumulating "problems" associated with American technological supremacy, which, by the end of the 1960s, led to a crisis of confidence.

Technology in Postwar America is a skillful treatment of the ways in which ideas about technology have been contested in the postwar period that will serve as an excellent starting point for students and generalists who wish to gain a quick overview of the subject. The Historian

[An] engrossing, important book... [that] is enthusiastically recommended. CHOICE

Carroll Pursell is without question one of the most interesting historians of modern technology. David Edgerton, Technology and Culture

An excellent starting point for students and generalists who wish to gain a quick overview of the subject. J. L. Anderson, Historian

Introduction
1. Arsenal of Democracy
2. The Geography of Everywhere
3. Foreign Aid and Advantage
4. The Atom and the Rocket
5. Factories and Farms
6. "It's Fun to Live in America"
7. Brain Drain and Technology Gap
8. From Technology Drunk...
9....To Technology Sober
10. A Wired Environment
11. Standing Tall Again
12. Globalization, Modernity, and the Postmodern
Notes
Bibliography
Index

Carroll Pursell has taught at several universities, including Case Western Reserve, from which he retired as the Adeline Barry Davee Distinguished Professor Emeritus. He is a former president of the Society for the History of Technology and the International Committee for the History of Technology. He currently serves as adjunct professor of modern history at Macquarie University in Sydney, Australia.