An Ethnography of Self-Harm 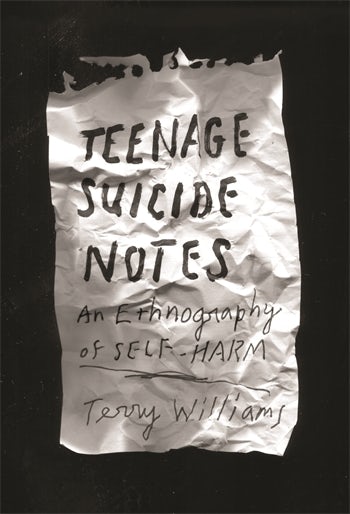 An Ethnography of Self-Harm

"Picturing myself dying in a way I choose myself seems so comforting, healing and heroic. I'd look at my wrists, watch the blood seeping, and be a spectator in my last act of self-determination. By having lost all my self-respect it seems like the last pride I own, determining the time I die."-Kyra V., seventeen

Reading the confessions of a teenager contemplating suicide is uncomfortable, but we must do so to understand why self-harm has become epidemic, especially in the United States. What drives teenagers to self-harm? What makes death so attractive, so liberating, and so inevitable for so many? In Teenage Suicide Notes, sociologist Terry Williams pores over the writings of a diverse group of troubled youths to better grasp the motivations behind teenage suicide and to humanize those at risk of taking their own lives.

Williams evaluates young people in rural and urban contexts and across lines of race, class, gender, and sexual orientation. His approach, which combines sensitive portrayals with sociological analysis, adds a clarifying dimension to the fickle and often frustrating behavior of adolescents. Williams reads between the lines of his subjects' seemingly straightforward reflections on alienation, agency, euphoria, and loss, and investigates how this cocktail of emotions can lead to suicide—or not. Rather than treating these notes as exceptional examples of self-expression, Williams situates them at the center of teenage life, linking them to abuse, violence, depression, anxiety, religion, peer pressure, sexual identity, and family dynamics. He captures the currents that turn self-destruction into an act of self-determination and proposes more effective solutions to resolving the suicide crisis.

Always the compassionate listener and masterful ethnographer, Terry Williams courageously takes on teenage suicide, one of the nation's most vexing and tragic subjects. He understands the problem as a father, mentor, teacher, and friend of victims and their families. May the voices of despairing teenagers whom Terry has presented here be heard throughout the nation. William Kornblum, Doctoral Program in Sociology, Graduate Center, City University of New York

Teenage Suicide Notes is a remarkable book that in turns is powerful, poignant, and profoundly disturbing, as it places in focus the fragmented inner lives of young people living in alienated desperation at the very edge of existence, just before they end their lives. Suicide Notes allows us to witness aspects of their struggle, while encouraging our understanding. Elijah Anderson, author of Code of the Street and The Cosmopolitan Canopy, William K. Lanman, Jr. Professor of Sociology at Yale University

Terry Williams makes us understand why young people engage in self-harm. He also tells us about what can be done. And by understanding the self-harm of our young, we also get to know ourselves as adults caught up in contemporary society. All this is brought to us with insight, respect, and dignity, without losing interpretative and critical power. What awaits the reader is the irrevocable need and hope for a dialogue between generations, since the self-harm of the young ultimately is a refusal to cope. Mats Trondman, Center for Cultural Sociology at Linnaeus University

Terry Williams provides a rare and compassionate account of self-harm and the wish to 'check out' of this world via his compilation of teenage suicide notes obtained through a most mindful application of the ethnographic method. This is vital reading for mental health trainees and professionals, sociologists, policy makers and all in search of a fuller, experience-near, understanding of suicide. Howard Steele, New School for Social Research

When Williams gets out of the way and lets his subjects talk, his central point is vindicated: To care about teens (or anyone), start by listening to what they tell you. Peter C. Baker, Pacific Standard

Williams’s ability to immerse readers in teen headspace is also the book’s strength. . . . And his expansive definition of suicide notes gives him room for some nuanced remarks about adolescents’ attraction to self-destruction. Megan Marz, Times Literary Supplement

Terry Williams is a professor of sociology at the New School for Social Research. He specializes in teenage life and culture, drug abuse, crews and gangs, and violence and urban social policy. He is the author of The Con Men: Hustling in New York City (Columbia, 2015); Harlem Supers: The Social Life of a Community in Transition (2015); Crackhouse: Notes from the End of the Line (1993); and The Cocaine Kids: The Inside Story of a Teenage Drug Ring (1989); and is the founder and director of the Harlem Writers Crew Project, a multimedia approach to urban education for center city and rural youths.