Surfers, Scammers, and the Untold Story of the Marijuana Trade 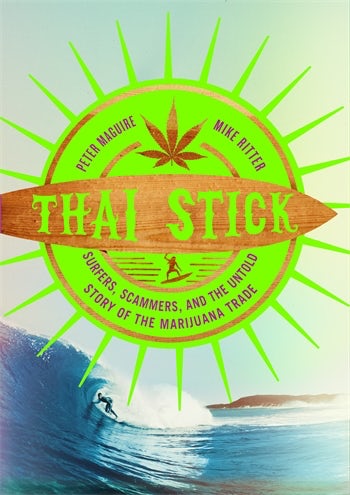 Surfers, Scammers, and the Untold Story of the Marijuana Trade

Located on the left bank of the Chao Phya River, Thailand's capital, Krungthep, known as Bangkok to Westerners and "the City of Angels" to Thais, has been home to smugglers and adventurers since the late eighteenth century. During the 1970s, it became a modern Casablanca to a new generation of treasure seekers, from surfers looking to finance their endless summers to wide-eyed hippie true believers and lethal marauders left over from the Vietnam War.

Moving a shipment of Thai sticks from northeast Thailand farms to American consumers meant navigating one of the most complex smuggling channels in the history of the drug trade. Many forget that until the mid-1970s, the vast majority of marijuana consumed in the United States was imported, and there was little to no domestic production.

Peter Maguire and Mike Ritter are the first historians to document this underground industry, the only record of its existence rooted in the fading memories of its elusive participants. Drawing on hundreds of interviews with smugglers and law enforcement agents, the authors recount the buy, delivery, voyage home, and product offload. They capture the eccentric personalities of the men and women who transformed the Thai marijuana trade from a GI cottage industry into a professionalized business moving the world's most lucrative commodities, unraveling a rare history from the smugglers' perspective.

A remarkable story, rich in untold details about a vastly lucrative yet little known trade. Anne McClintock, University of Wisconsin–Madison

An extraordinary work, at once a participatory anthropology, detached sociology, cultural history, remarkable example of oral history, series of smuggling stories, and many other things to boot. Anders Stephanson, Columbia University

At once cutting-edge research and candid autobiography, this globe-straddling tale rolls from Southern California surf shops to the beaches of Baja, from Maui to seedy bars in Thailand and the jungles of Laos, and from communist extermination camps in Cambodia to DEA Headquarters in Washington, D.C. Along the way, the authors introduce a cast of real-life characters stranger than fiction, who earned their place in the annals of American crime by chasing their own dreams across the high seas and back again, creating a billion-dollar black market industry in the process, sometimes at the cost of their freedom and sometimes at the cost of their lives. Craig Etcheson, war crimes investigator

From the dank highlands of Siam to the sage-blown point breaks of Alta California, Thai Stick explores the relationship between surf culture and the 'funny business.' Maguire—grounded in law, history, and the surfing life—is exactly the right author for this street-level breakdown of smuggling in the 1970s. Scott Hulet, The Surfer's Journal

Thai Stick is a brilliant story of the surfers and watermen who pioneered the trans-Pacific pot trade. Adventurous and often hilarious, the book's narrative blows open one of the last remaining secrets of the hippie era. It also exposes the dark side of the business and its occasionally tragic consequences. Thai Stick is at once an authoritative work of history and an intense, highly entertaining read. Nicholas Schou, author of The Weed Runners: Travels with the Outlaw Capitalists of America's Medical Marijuana Trade

Thai Stick is a rare, heart-stopping story about California surfers, hippies and straight out druggies who smuggled potent marijuana from Thailand to the United States and changed the shape of the American drug culture. Based on interviews with the modern day pirates, Thai Stickcaptures the wild aura of the 1970s and 1980s dope trade and the U.S. War on Drugs that tried to stop it. Elizabeth Becker

Read the chapter, "The Hippie Trail":

Peter Maguire is the author of Law and War and Facing Death in Cambodia. He is a historian and former war-crimes investigator whose writings have been published in the International Herald Tribune, New York Times, The Independent, Newsday, and Boston Globe. He has taught law and war theory at Columbia University and Bard College.

Mike Ritter dropped out of the University of California, Santa Cruz, in 1967 and set off on the Hippie Trail to Afghanistan and India, where he began smuggling hash and marijuana in 1968 and continued for eighteen years. He recently graduated from the University of Hawaii with an undergraduate degree in astronomy and physics.

David Farber is as a professor in the Department of History at Temple University. He received his Ph.D. from the University of Chicago and is the author or coeditor of several books, including The Rise and Fall of Modern American Conservatism and Taken Hostage: The Iran Hostage Crisis and America's First Encounter with Radical Islam.