The Ages of Globalization 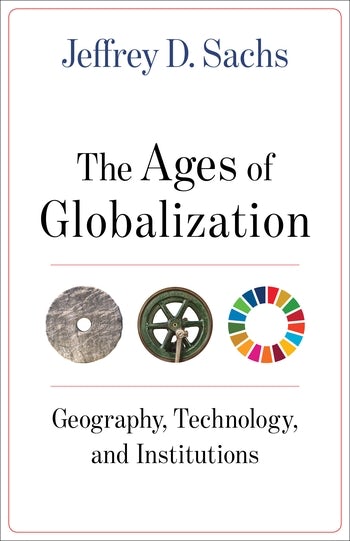 The Ages of Globalization

Today’s most urgent problems are fundamentally global. They require nothing less than concerted, planetwide action if we are to secure a long-term future. But humanity’s story has always been on a global scale. In this book, Jeffrey D. Sachs, renowned economist and expert on sustainable development, turns to world history to shed light on how we can meet the challenges and opportunities of the twenty-first century.

Sachs takes readers through a series of seven distinct waves of technological and institutional change, starting with the original settling of the planet by early modern humans through long-distance migration and ending with reflections on today’s globalization. Along the way, he considers how the interplay of geography, technology, and institutions influenced the Neolithic revolution; the role of the horse in the emergence of empires; the spread of large land-based empires in the classical age; the rise of global empires after the opening of sea routes from Europe to Asia and the Americas; and the industrial age. The dynamics of these past waves, Sachs demonstrates, offer fresh perspective on the ongoing processes taking place in our own time—a globalization based on digital technologies. Sachs emphasizes the need for new methods of international governance and cooperation to prevent conflicts and to achieve economic, social, and environmental objectives aligned with sustainable development. The Ages of Globalization is a vital book for all readers aiming to make sense of our rapidly changing world.

The Ages of Globalization provides an unparalleled explanation of human development. This lucidly written book is a must read for anyone interested in how humanity has evolved and the root causes of the challenges we face today. Jeff Sachs's magisterial and engaging book provides profound perspectives on human history, offering urgently needed insights to make sense of the present and offer an essential guide to our future. Ian Goldin, author of Age of Discovery: Navigating the Storms of Our Second Renaissance

Sachs has produced a masterpiece—its scope is breathtaking, its insights stimulating, and its conceptual innovation pathbreaking. For those seeking a story about where humanity has come from and is going to, his book is a story with many lessons and hopes for the future. At once clear headed and opinionated, he provides a roadmap for what we could and should do for our grandchildren. A wonderful book. Gordon L. Clark, University of Oxford

This romp through world history, by the famous economist Jeffrey Sachs, summarizes most of what you really need to know about the history of the last 70,000 years. Buy just this one book: it will let you throw away dozens of specialized books that you already own! Jared Diamond, author of Guns, Germs, and Steel: The Fates of Human Societies

Coming from Jeffrey Sachs I had expected this book to be analytical, punchy, and readable, and so it is. But it is a pleasure to be able to report that this also is a book by a superstar economist that takes both history and geography seriously, allowing the past, with all its complexities and contingencies, to speak for itself. Impressively broad in both temporal and geographical scope, this is a masterpiece of concision and a great introduction to global economic history. Kevin O’Rourke, author of A Short History of Brexit: From Brentry to Backstop

In this erudite yet accessible book, Jeffrey Sachs traces the history of modern humans from our migration from Africa some 70,000 years ago to today. In a path breaking account, he shows how geography, technology and institutions drive change. His analysis is indispensable for understanding current global predicaments. A tour de force. Prasannan Parthasarathi, Boston College

At a time when the foundations of the world economic order are being challenged, we rely on the knowledge accumulated throughout history to make wiser choices for the future of our societies. In his new book The Ages of Globalization, Jeffrey Sachs offers a superb and unique historical and analytical framework to understand the process of globalization, highlighting its dynamic nature, while addressing its social and economic implications. From the Paleolithic Age to the current Digital Age, this book exploits the interplay of geography, technology and institutions to achieve a comprehensive explanation on how globalization emerges and evolves. Analysts, policymakers, social and political leaders, interested citizens and anyone concerned with the future of the global economy can draw invaluable lessons from this book. Felipe Larraín B., Former Minister of Finance of Chile

The Ages of Globalization is not just a book for a modern citizen. It is an essential survival kit for the 21st century. While humanity amassed wealth and riches, in parallel came the means for its downfall. Now, we are facing forces none of us can counter alone: climate change, environmental degradation, time. The call for action resonates with vigor and urgency. With this book, we can better explore, learn, and act. Miroslav Lajčák, Minister of Foreign and European Affairs of the Slovak Republic

Few scholars have the breadth to cogently weave insights from wide-ranging fields such as agronomy, economics, archeology, anthropology, and engineering to recount the layered story of how globalization and development unfolded. As always, Sachs is a treat to read. Gordon McCord, University of California, San Diego

Sachs has produced a brilliant, yet remarkably short, book on the biggest challenges now confronting humanity. He provides a compelling account of how geography, technology and institutions have combined to shape globalization over 70,000 years, in seven distinct ages. Then he explains what humanity now has to do if it is to escape the environmental, social and geopolitical calamities that its own staggering successes have brought so close. This book is essential reading. Martin Wolf, Chief Economics Commentator, Financial Times

1) This dazzling book makes an invaluable contribution to the debate about the future of globalization by brilliantly summarizing humanity’s existential challenges and providing bold ideas for ensuring our survival. Sachs makes a persuasive appeal that applying the concept of sustainable development must be the essential vision for our time. His thoughtful proposals for reforming key international institutions, starting with the UN, merit particular attention. Ages of Globalization is a required reading for our times. Vuk Jeremic, former President of the United Nations General Assembly