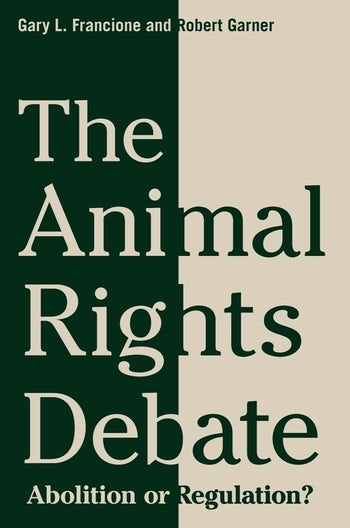 Gary L. Francione is a law professor and leading philosopher of animal rights theory. Robert Garner is a political theorist specializing in the philosophy and politics of animal protection. Francione maintains that we have no moral justification for using nonhumans and argues that because animals are propertyor economic commoditieslaws or industry practices requiring "humane" treatment will, as a general matter, fail to provide any meaningful level of protection. Garner favors a version of animal rights that focuses on eliminating animal suffering and adopts a protectionist approach, maintaining that although the traditional animal-welfare ethic is philosophically flawed, it can contribute strategically to the achievement of animal-rights ends.

As they spar, Francione and Garner deconstruct the animal protection movement in the United States, the United Kingdom, Europe, and elsewhere, discussing the practices of such organizations as PETA, which joins with McDonald's and other animal users to "improve" the slaughter of animals. They also examine American and European laws and campaigns from both the rights and welfare perspectives, identifying weaknesses and strengths that give shape to future legislation and action.

This volume does an excellent job of contrasting the welfarist and rights positions their competing claims, and possible weakness therein. Choice

Introduction: What This Book Is and Is Not About
1. The Abolition of Animal Exploitation, by Gary L. Francione
2. A Defense of Broad Animal Protectionism, by Robert Garner
3. A Discussion Between Francione and Garner
Index

Gary L. Francione is distinguished professor of law and Nicholas deB. Katzenbach Scholar of Law and Philosophy at Rutgers University School of Law-Newark. He is the author of numerous books and articles on animal ethics and on animals and the law, including Animals as Persons: Essays on the Abolition of Animal Exploitation.

Robert Garner is professor of politics at the University of Leicester and the author of, among other books, Animals, Politics, and Morality.