The Failure of Institutional Politics in Liberal Democracies 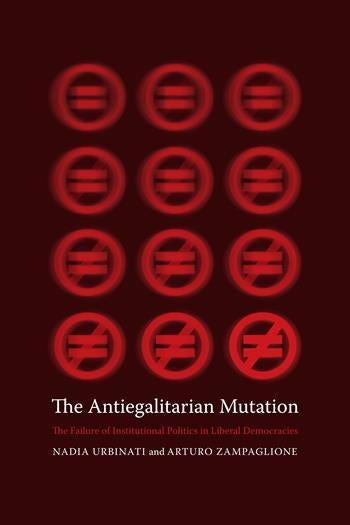 The Failure of Institutional Politics in Liberal Democracies

The twin crises of immigration and mass migration brought new urgency to the balance of power between progressive, humanitarian groups and their populist opponents. In the United States and many European countries, the outcome of this struggle is uncertain, with a high chance that the public will elect more politicians who support an agenda of nativism and privatization.

The Antiegalitarian Mutation makes a forceful case that those seeking to limit citizenship and participation, political or otherwise, have co-opted democracy. Political and legal institutions are failing to temper the interests of people with economic power against the needs of the many, leading to an unsustainable rise in income inequality and a new oligarchy rapidly assuming broad social control. For Nadia Urbinati and Arturo Zampaglione, this insupportable state of affairs is not an inevitable outcome of robust capitalism but rather the result of an ideological war waged against social democracy by the neoliberal governments of Reagan, Thatcher, and others. These giants of free-market fundamentalism secured power through legitimate political means, and only by taking back our political institutions can we remedy the social ills that threaten to unmake our world. That, according to The Antiegalitarian Mutation, is democracy's challenge and its ongoing promise.

Nadia Urbinati is one of the most original thinkers of representative democracy in our time. In this set of wide-ranging and stimulating conversations, she uses theory and insights drawn from across the history of political thought to illuminate the profound challenges to political equality that we are witnessing in both Europe and the Americas today. Jan-Werner Müller, author of Contesting Democracy: Political Ideas in Twentieth-Century Europe

In The Antiegalitarian Mutation, Nadia Urbinati and Arturo Zampaglione take on the two potentially insurmountable challenges confronting contemporary democracy: increasing economic inequality and rising xenophobia. Combining passion and sobriety, these interlocutors diagnose the sources of these antidemocratic threats, explore their dire implications for liberty and equality, and endeavor to devise viable solutions. Anyone worried about the phenomena of plutocracy and right-wing populism and the future of democratic politics will need to read this important book. John P. McCormick, author of Machiavellian Democracy

The ongoing mutation of democracy into a profoundly antiegalitarian order, Nadia Urbinati argues, is characterized by a neoliberal retreat from what is genuinely public and organized around the principle of equality. Her superbly lucid and historically attuned account is a breath of fresh air in the now crowded field of texts dealing with the 'crisis of democracy.' Linda M. G. Zerilli, author of A Democratic Theory of Judgment

The Antiegalitarian Mutation presents stimulating considerations on the value of democracy, both as an ideal and as a practice, and on the impact that recent global antiegalitarian phenomena have had on it. Emanuela Ceva, coauthor of Diversity in Europe: Dilemmas of Differential Treatment in Theory and Practice

An accessible and wide-ranging analysis of the phenomenology and effects of the current crisis of Western democracies. Valeria Ottonelli, University of Genova

This is an essential read for all interested in political theory and philosophy. CHOICE

Introduction, by Arturo Zampaglione
1. A Great Mutation
2. The Value of Democracy
3. The Decline of Universalism
4. The "Few" and the "Many"
5. The Secession from Democracy
6. Differences and Identity Politics
Index

Read an excerpt from the first chapter:

Nadia Urbinati is Kyriakos Tsakopoulos Professor of Political Theory at Columbia University. Her books include Democracy Disfigured (2014) and A Cosmopolitanism of Nations (2009).

Arturo Zampaglione is the New York correspondent for La Repubblica.

Martin Thom is also the translator of Ruwen Ogien's Human Kindness and the Smell of Warm Croissants: An Introduction to Ethics (Columbia, 2015) and Alain Corbin's Village Bells: The Culture of the Senses in the Nineteenth-Century French Countryside (Columbia, 1998).