Challenging the Face of Science 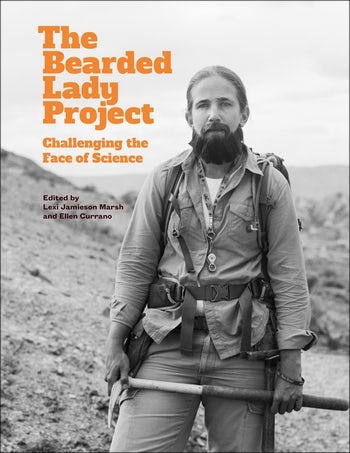 Challenging the Face of Science

During a discussion of how women are treated in traditionally male-dominated fields, paleobotanist Ellen Currano lamented to filmmaker Lexi Jamieson Marsh that, as the only young and female faculty member in her department, she was not taken seriously by her colleagues. If only she had the right amount of facial hair, she joked, maybe they would recognize her expertise. The next morning, she saw a message from Lexi saying: Let’s do this. Let’s get beards. That simple remark was the beginning of the Bearded Lady Project.

Challenging persistent gender biases in the sciences, the project puts the spotlight on underrepresented geoscientists in the field and in the lab. This book pairs portraits of the scientists after donning fake beards with personal essays in which they tell their stories. The beautiful photography by Kesley Vance and Draper White—shot with a vintage large-format camera and often in the field, in deserts, mountains, badlands, and mudflats—recalls the early days of paleontological expeditions more than a century ago. With just a simple prop, fake facial hair, the pictures dismantle the stereotype of the burly, bearded white man that has dominated ideas of field scientists for far too long. Using a healthy dose of humor, The Bearded Lady Project celebrates the achievements of the women who study the history of life on Earth, revealing the obstacles they’ve faced because of their gender as well as how they push back.

The portraits in The Bearded Lady Project intentionally cause double takes, forcing the viewer to look, then look again. But their real power lies in how they require us to look inward and see that antediluvian ideas about who can and cannot do science still linger. The accompanying stories of remarkable women in paleontology make one hopeful that soon these old stereotypes will finally go extinct. Marcia Bjonerud, professor of geosciences at Lawrence University, author of Timefulness: How Thinking Like a Geologist Can Help Save the World

The Bearded Lady Project is a necessary novelty. It’s snarky, beautiful, and increasingly powerful in the evolution of its message: Don’t ever assume you know what a scientist looks like. These essays—critical, poignant examinations of societal and historical perceptions of genius—remind us how much scientists have to say about the world in which their research takes place. Emily Graslie, chief curiosity correspondent at the Field Museum of Natural History

“The stories within are compelling, and I wish I had been able to read them before I embarked on my own career as a scientist. The contributors’ and editors’ voices emanate clearly from the pages. The writing is an impressive combination of approachable yet sophisticated, powerful yet playful, meticulously researched and fact-based, yet balanced with personal, often painful narratives. Lindsay Zanno, head of paleontology, North Carolina Museum of Natural Sciences

Lexi Jamieson Marsh is the founder of the independent production company On Your Feet Entertainment and the director and producer of The Bearded Lady Project short and feature-length documentary films. She is currently visiting assistant professor of media and culture at Miami University.

Ellen Currano is a paleontologist at the University of Wyoming with a joint appointment in the Department of Botany and the Department of Geology and Geophysics. Her research focuses on the response of ancient forest communities to environmental changes.