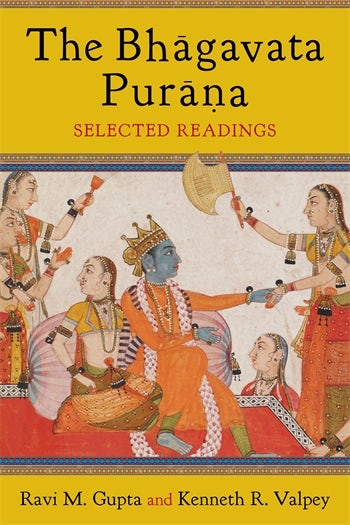 Formalized by the tenth century, the expansive Bhagavata Purana resists easy categorization. While the narrative holds together as a coherent literary work, its language and expression compete with the best of Sanskrit poetry. The text's theological message focuses on devotion to Krishna or Vishnu, and its philosophical outlook is grounded in the classical traditions of Vedanta and Samkhya. No other Purana has inspired so much commentary, imitation, and derivation. The work has grown in vibrancy through centuries of performance, interpretation, worship, and debate and has guided the actions and meditations of elite intellectuals and everyday worshippers alike.

This annotated translation and detailed analysis shows how one text can have such enduring appeal. Key selections from the Bhagavata Purana are faithfully translated, while all remaining sections of the Purana are concisely summarized, providing the reader with a continuous and comprehensive narrative. Detailed endnotes explain unfamiliar concepts and several essays elucidate the rich philosophical and religious debates found in the Sanskrit commentaries. Together with the multidisciplinary readings contained in the companion volume The Bhagavata Purana: Sacred Text and Living Tradition (Columbia, 2013), this book makes a central Hindu masterpiece more accessible to English-speaking audiences and more meaningful to scholars of Hindu literature, philosophy, and religion.

The work gives the reader a superb sense of what the whole of the Bhagavata is all about. Graham M. Schweig, author-translator of Bhagavad Gita: The Beloved Lord's Secret Love Song

The authors have provided an excellent sampling of the text. Edwin Bryant, Rutgers University

Nowadays the Bhagavad Gita is regarded as the central text of Hinduism, but for centuries that honor belonged more to the Bhagavata Purana, where Krishna also reigns. Thanks to Gupta and Valpey, today we have a chance to encounter the Bhagavata anew—fresh translations, an absorbing introduction, and a judicious, imaginative selection of passages that reveal the heart and sinews of this monumentally beautiful work. Jack Hawley, Barnard College

The Bhagavata Purana is one of the most important theological and devotional texts of Hinduism. Yet, given its great length and complexity, it has rarely been read even by the wider audience of scholars and students, beyond the justly famous narratives of Krishna found in its tenth book. Most readers remain unfamiliar with the rich range of its philosophical and religious narratives, its fascinating and entertaining narrative of cosmology and myth, its teachings on religious practice and devotion, and its important articulation of a fundamental Vaishnava theology. Gupta and Valpey have put their Indological and theological skills to good use in their excellent translations of key texts judiciously selected from all twelve books, thus making the Purana truly accessible for the first time. It is also a welcome companion to the scholarly essays found in their The Bhagavata Purana: Sacred Text and Living Tradition. Together, these volumes will quickly find a place in the classroom and on the shelves of every library collection attuned to the greater Hindu traditions. Francis X. Clooney, SJ, Director of the Center for the Study of World Religions, Harvard University

To know the Bhagavata Purana is to love it, but until now it has been largely inaccessible to those who wish to experience its delights. Ravi Gupta and Kenneth Valpey have now brought this classic to a global audience. The pickiest scholar will be satisfied with their faithful yet fluent translations. The lay reader is well served by chapter summaries and judicious selections, and devotees will delight in the bhakti which suffuses this fine book. McComas Taylor, Australian National University

This is an extraordinarily useful introduction to the Bhagavata Purana, one of the most important scriptures of the Hindu tradition. As told in this devotional classic, the tale of Krishna—the Supreme Being who acts playfully in the world to bring succor and delight to his devotees—is absorbing and elevating. More than an introduction, Gupta and Valpey's work is a masterfully edited and translated presentation of the heart of the original text. It captures the essence of the story in an accessible and engaging package. Highly recommend for students of religion and general readers wanting insight into the Hindu experience of God. Lance E. Nelson, University of San Diego

The Bhagavata Purana is an enormously important text in the religious landscape of Hindu India. It is also a text that is very difficult to translate. Ravi Gupta and Kenneth Valpey have performed a huge service by producing an eminently readable and scholarly translation of vital selections of the Bhagavata Purana that will be very useful for those interested in this essential scripture. This volume contains the Bhagavata's most popular narratives that are commemorated in widespread artwork and religious commentaries, and knits them together with very effective summaries of the untranslated portions. Along with its informative introduction, the overall result gives handy and accurate access to a text that many initial readers find unwieldy. David L. Haberman, Indiana University Bloomington

Ravi M. Gupta is the Charles Redd Chair of Religious Studies at Utah State University. He is the author of The Caitanya Vaishnava Vedanta of Jiva Gosvami: When Knowledge Meets Devotion (2007), editor of Caitanya Vaisnava Philosophy (2014), and coeditor, with Kenneth R. Valpey, of The Bhagavata Purana: Sacred Text and Living Tradition (Columbia, 2013).

Kenneth R. Valpey is a research fellow of the Oxford Centre for Hindu Studies. He is the author of Attending Krishna's Image: Chaitanya Vaishnava Murti-seva as Devotional Truth (2006).