The Birth of Chinese Feminism 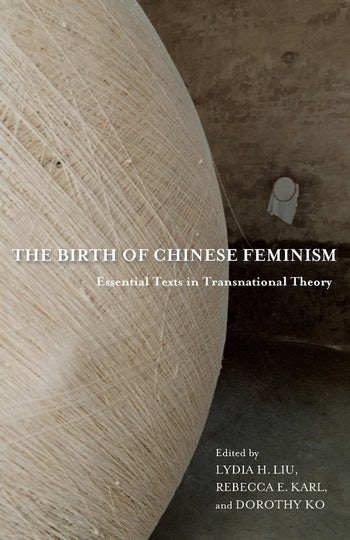 The Birth of Chinese Feminism

He-Yin Zhen (ca. 1884-1920?) was a theorist who figured centrally in the birth of Chinese feminism. Unlike her contemporaries, she was concerned less with China's fate as a nation and more with the relationship among patriarchy, imperialism, capitalism, and gender subjugation as global historical problems. This volume, the first translation and study of He-Yin's work in English, critically reconstructs early twentieth-century Chinese feminist thought in a transnational context by juxtaposing He-Yin Zhen's writing against works by two better-known male interlocutors of her time.

The editors begin with a detailed analysis of He-Yin Zhen's life and thought. They then present annotated translations of six of her major essays, as well as two foundational tracts by her male contemporaries, Jin Tianhe (1874-1947) and Liang Qichao (1873–1929), to which He-Yin's work responds and with which it engages. Jin, a poet and educator, and Liang, a philosopher and journalist, understood feminism as a paternalistic cause that liberals like themselves should defend. He-Yin presents an alternative conception that draws upon anarchism and other radical trends. Ahead of her time, He-Yin Zhen complicates conventional accounts of feminism and China's history, offering original perspectives on sex, gender, labor, and power that remain relevant today.

The Birth of Chinese Feminism: Essential Texts in Transnational Theory is less a broad collection of essays than it is a well-argued case for the transnational and radical origins of Chinese feminism. MCLC

In resuscitating He-Yin Zhen's work, [the editors and translators] have produced a volume that challenges long-established views about the birth of Chinee feminism and repositions it as a pluralist and global event, the theoretical significance of which continues to resonate today. Radical Philosophy

An invaluable contribution to anyone interested in Chinese intellectual history or the history of feminism across nations and across time periods. Books & Culture

Sets a new standard for doing comparative literary and cultural studies in the China field and beyond. Comparative Literature and World Literature

Read the chapter "The Historical Context: Chinese Feminist Worlds at teh Turn of the Twentieth Century" from The Birth of Chinese Feminism (to view in full screen, click on icon in bottom right-hand corner)

Lydia H. Liu is Wun Tsun Tam Professor in the Humanities at Columbia University and codirector of the Center for Translingual and Transcultural Studies at Tsinghua University in Beijing. She is the author of The Clash of Empires: The Invention of China in Modern World Making and, more recently, The Freudian Robot: Digital Media and the Future of the Unconscious.

Rebecca E. Karl is associate professor of history at New York University. She is the author of Mao Zedong and China in the Twentieth-Century World: A Concise History and Staging the World: Chinese Nationalism at the Turn of the Twentieth Century.

Dorothy Ko, a native of Hong Kong, is professor of history at Barnard College. She is a coeditor of Women and Confucian Cultures in Pre-modern China, Korea, and Japan and the author of Teachers of the Inner Chambers: Women and Culture in Seventeenth-Century China and Cinderella's Sisters: A Revisionist History of Footbinding.