A Life of Alexandre Kojève 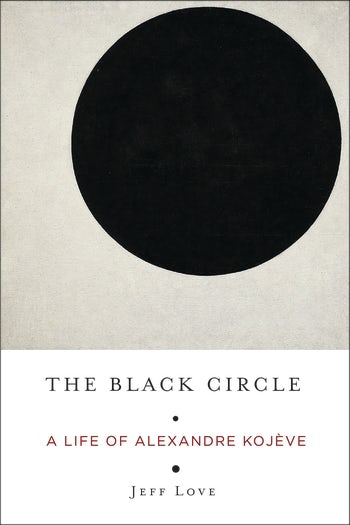 A Life of Alexandre Kojève

Alexandre Kojève (1902–1968) was an important and provocative thinker. Born in Russia, he spent most of his life in France. His interpretation of Hegel and his notorious declaration that history had come to an end exerted great influence on French thinkers and writers such as Raymond Aron, Georges Bataille, Maurice Merleau-Ponty, Jacques Lacan, and Raymond Queneau. An unorthodox Marxist, he was a critic of Martin Heidegger and interlocutor of Leo Strauss who played a significant role in establishing the European Economic Community; a polyglot with many unusual interests, he wrote works, mostly unpublished in his lifetime, on quantum physics, the problem of the infinite, Buddhism, atheism, and Vassily Kandinsky’s paintings.

In The Black Circle, Jeff Love reinterprets Kojève’s works, showing him to be an essential thinker who challenged modern society and its valuation of individuality, self-interest, and freedom from death. Emphasizing Kojève’s neglected Russian roots, The Black Circle puts him in the context of the late-nineteenth- and early-twentieth-century Russian debates over the proper ends of human life. Love explores notions of perfection, freedom, and finality in Kojève’s account of Hegel and his neglected later works, clarifying Kojève’s emancipatory thinking and the meaning of the oft-misinterpreted “end of history.” Combining intellectual history, close textual analysis, and philosophy, The Black Circle reveals Kojève’s thought as a profound critique of capitalist individualism and a timely meditation on human freedom.

The Black Circle is an extraordinary study in which hardcore philosophical issues are approached at a cosmic level but lyrically, almost as part of an intimate conversation. Alexandre Kojève was so thoroughly at home in German and French culture that his origins in yet a third culture have been neglected. In this book, Jeff Love restores Russian contexts to Kojève’s thought on Hegel and the ‘end of history.’ Caryl Emerson, Princeton University

Kojève is best known as arguably the best twentieth-century commentator on Hegel. But Love’s incisive book shows that he is much more. This is by far the best, most comprehensive overview of Kojève’s thinking in any language and the only one to draw in detail on Kojève’s Russian background. Clearly, elegantly written and argued, it is indispensable reading for anyone interested in the complexity and range of twentieth-century thought. William Todd Mills, Harry Tuchman Levin Professor of Literature, Harvard University

Known only in Anglophone letters for a drastically truncated translation of his idiosyncratic and influential Parisian “Lectures on Hegel,” Alexandre Kojève bequeathed to posterity a multitude of tantalizing manuscripts and has finally received the intellectual contextualization and philosophical interpretation he deserves. In his magisterial study Jeff Love uncovers the profound presence of nineteenth-century Russian thought within Kojève’s literary style and his philosophy of negation, finality, perfection, repetition, political community, and radical freedom, such that Kojève emerges from Dostoevsky's underground as a distinctly Russian Hegelian existentialist thinker worthy of serious consideration today. Henry W. Pickford, Duke University

In this excellent intellectual biography, Jeff Love explicates the thought and speculates on the intentions of expatriate Russian Hegelian philosopher Alexandre Kojève. Love’s readings of neglected Russian influences on Kojève (Dostoevsky and philosophers Vladimir Soloviev and Nikolai Fedorov) and of Kojève himself are satisfyingly complex, clear, and accessible. His Kojève is deep, controversial, and a 'philosophical propagandist' still relevant today. Donna Orwin, University of Toronto

A sophisticated contribution to the study of one of the most enigmatic modern thinkers, this book is simultaneously scholarly and bold. It not only retraces Kojève’s roots in more than a century of Russian literature and thought but also–attuned to the paradoxes and ironies embedded in his kaleidoscopic corpus–orchestrates a spirited exchange among canonical figures of the 'Western tradition,' from Plato and Aristotle to Beckett and Leo Strauss. Ilya Kliger, New York University

Love’s thoughtful account and probing interrogation of Kojève’s texts shed light on both the powerful arguments and interpretations that Kojève presents and the bewildering paradoxes and problems that the outcomes of these arguments leave us with. James H. Nichols, H-Net

This lucid book goes far in clarifying the origins of and the problems with Kojeve's 'end of history' thesis. Choice

Jeff Love is Research Professor of German and Russian at Clemson University. He is the author of The Overcoming of History in “War and Peace” (2004), editor of Heidegger in Russia and Eastern Europe (2017), and translator of Kojève’s Atheism (Columbia, 2018), among other works.