The Body and Society 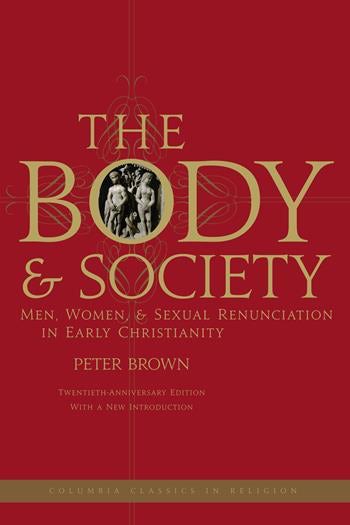 The Body and Society

First published in 1988, Peter Brown's The Body and Society was a groundbreaking study of the marriage and sexual practices of early Christians in the ancient Mediterranean and Near East. Brown focuses on the practice of permanent sexual renunciation-continence, celibacy, and lifelong virginity-in Christian circles from the first to the fifth centuries A.D. and traces early Christians' preoccupations with sexuality and the body in the work of the period's great writers.

The Body and Society questions how theological views on sexuality and the human body both mirrored and shaped relationships between men and women, Roman aristocracy and slaves, and the married and the celibate. Brown discusses Tertullian, Valentinus, Clement of Alexandria, Origen, Constantine, the Desert Fathers, Jerome, Ambrose, and Augustine, among others, and considers asceticism and society in the Eastern Empire, martyrdom and prophecy, gnostic spiritual guidance, promiscuity among the men and women of the church, monks and marriage in Egypt, the ascetic life of women in fourth-century Jerusalem, and the body and society in the early Middle Ages. In his new introduction, Brown reflects on his work's reception in the scholarly community.

The reader of Peter Brown's work is always uncertain which to admire most, the grace and clarity, the scope and erudition, or the ability to bring diverse and complex units into a meaningful whole. These merits are all fully on display in The Body and Society. New York Times Book Review

Peter Brown's book is a great achievement. It will long be read, its insights studied and discussed, and its prose admired and enjoyed.... His work is a tour de force, showing a mastery of text and subject through six centuries of history. W. H. C. Frend, New York Review of Books

A profound exploration of the meaning of embodiment, celibacy, and chastity for early Christians. Christianity Today

A work of rediscovery and re-evaluation, written in luminous, heart-stopping prose. Nicolas Rothwell, The Australian

A truly magisterial work of historical scholarship by the greatest living authority on late antique Mediterranean civilization. It will be the definitive work on this subject for the foreseeable future. Choice

[A] compelling and human study of the depths and heights of sexual renunciation.... Brown's detached yet compassionate sympathy recreates the subtle and complex world of late-antique sexuality and renunciation with a skill which is uniquely his. This is not a history of the idea of virginity, but a sharpyly-focused series of pictures of its practice. London Review of Books

Only Peter Brown could have written The Body and Society. The book... is the work of an acute and immensely learned mind soaked in the sources, with an enviable power to bring together widely scattered and recondite texts. Religion

Preface
Introduction
Part I. From Paul to anthony
1. Body and City
2. From Apostle to Apologist: Sexual Order and Sexual Renunciation in the Early Church
3. Martyrdom, Prophecy and Continence: Hermas to Tertullian
4. "To Undo the Works of Women": Marcion, Tatian and the Encratites
5. "When You Make the Two One": Valentinus and Gnostic Spiritual Guidance
6. "A Faint Image of Divine Providence": Clement of Alexandria
7. "A Promiscuous Brotherhood and Sisterhood": Men and Women in the Christian Churches
8. "I Beseech You: Be Transformed": Origen
9. "Walking on Earth, Touching High Heaven's Vault": Porphyry and Methodius
10. Church and Body: Cyprian, Mani and Eusebius of Caesarea
Part II. asceticism and Society in the Eastern Empire
11. The Desert Fathers: Anthony to John Climacus
12. "Make to Yourselves Separate Booths": Monks, Women and Marriage in Egypt
13. "Daughters of Jerusalem": The Ascetic Life of Women in the Fourth Century
14. Marriage and Mortality: Gregory of Nyssa
15. Sexuality and the City: John Chrysostom
16. "These Are Our Angels": Syria
Part III. Ambrose to Augustine: The Making of the Latin Tradition
17. Aula Pudoris: Ambrose
18. "Learn of Me a Holy Arrogance": Jerome
19. Sexuality and Society: Augustine
Epilogue. Body and Society: The Early Middle Ages
Bibliography
Index

Peter Brown, formerly professor of classics and history at the University of California, Berkeley, is the Philip and Beulah Rollins Professor of History at Princeton University and the most prominent scholar of late antiquity (between 250 and 800 A.D.). He is the author of a dozen books, including Augustine of Hippo, Authority and the Sacred: Aspects of the Christianization of the Roman World, The Rise of Western Christendom, and Poverty and Leadership in the Late Roman Empire.