Spells and the Ritual Imagination in Medieval Chinese Buddhism 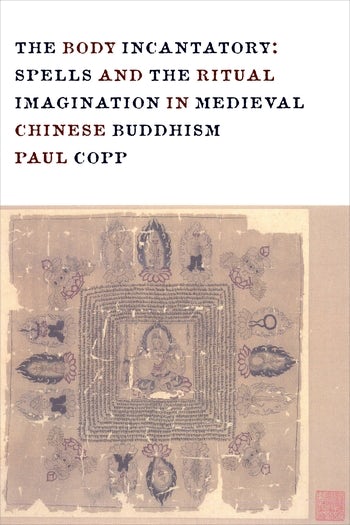 Spells and the Ritual Imagination in Medieval Chinese Buddhism

Whether chanted as devotional prayers, intoned against the dangers of the wilds, or invoked to heal the sick and bring ease to the dead, incantations were pervasive features of Buddhist practice in late medieval China (600–1000 C.E.). Material incantations, in forms such as spell-inscribed amulets and stone pillars, were also central to the spiritual lives of both monks and laypeople. In centering its analysis on the Chinese material culture of these deeply embodied forms of Buddhist ritual, The Body Incantatory reveals histories of practice—and logics of practice—that have until now remained hidden.

Paul Copp examines inscribed stones, urns, and other objects unearthed from anonymous tombs; spells carved into pillars near mountain temples; and manuscripts and prints from both tombs and the Dunhuang cache. Focusing on two major Buddhist spells, or dhāraṇī, and their embodiment of the incantatory logics of adornment and unction, he makes breakthrough claims about the significance of Buddhist incantation practice not only in medieval China but also in Central Asia and India. Copp's work vividly captures the diversity of Buddhist practice among medieval monks, ritual healers, and other individuals lost to history, offering a corrective to accounts that have overemphasized elite, canonical materials.

The Body Incantatory rightly calls into question the commonplace assumption that high esoteric Buddhism 'erased' an older 'proto-esoteric' incantation culture or relegated it to obsolescence. In doubting this assumption and studying the discourses and uses of dharani 'incantations' in medieval Chinese Buddhist culture, this book significantly contributes to our understanding of Buddhism in China in several significant ways. Daniel B. Stevenson, University of Kansas

This book engages a wide range of new materials, primarily unstudied texts and new archaeological evidence. It advances some key discussions that have recently been occupying the field of the study of Chinese religions and is filled with some real gems of scholarship that will excite the reader and inspire reflection. James Robson, Harvard University

This exhilarating book profoundly revises our understanding of Buddhist spells in medieval China. Both provocative and persuasive, it provides the first in-depth analysis of such spells manifested across a wide range of written, verbal, and material forms and compels us to reevaluate their fundamental importance in Buddhist practices. Wu Hung, University of Chicago

Buddhist dharani—verbal but often unintelligible incantations that took on an astonishing array of material forms—exist at the intersection of the domain of meanings and the domain of things, making them particularly 'good to think with.' And in The Body Incantatory Paul Copp does some wonderful thinking. His comprehensive and erudite study is a major contribution not only to the study of medieval Chinese Buddhism but also to our understanding of religious ritual and material culture writ large. Robert Sharf, University of California, Berkeley

Groundbreaking.... I believe this book will become a classic as well as pioneering work for the study of Buddhist spells. Youn-mi Kim, Studies in Chinese Religions

An important and thought-provoking contribution.... Eschewing the method of broad philological [survey] in favor of close readings of selected texts and—more importantly—material objects, Copp successfully illuminates several oft-overlooked aspects of medieval Chinese dhāraṇī, and in the process brings to light new insights on the permutations of both Buddhist and Chinese religious cultures. Josh Capitanio, Journal of Chinese Religions

An important contribution to the scholarly understanding of religious ritual and material culture. Richard D. McBride II, Journal of the American Oriental Society

Copp has earned a reputation as the leading expert on Chinese Buddhist dharani (incantation), and this book is likely to remain the definitive study on this topic for some time to come. Religious Studies Review

An important contribution to our understanding of medieval Chinese religious life.... A valuable resource for scholars working in comparative religion. Review of Religion and Chinese Society

Copp is to be commended for his bid to redirect and reshape the study of medieval Chinese Buddhism in The Body Incantatory. Dominic Steavu, Journal of Asian Studies

This book is an important enhancement of the research of the forgotten centuries long practice of utilizing written strings of sacred syllables dhāranī as amulets to protect the adept’s body or inscribing them on pillars for their sacred power to be disseminated with help of wind and shadow. New Books Asia

The methodology on display in this book marks an important and inspiring moment for our field. Overall, the book offers a new way of looking at medieval Chinese Buddhist thought and practice, and because it is written with some panache, one may hope that it will inspire others to research, think, and write differently. James A. Benn, Harvard Journal of Asiatic Studies

Short-listed, 2015 Best First Book in the History of Religions, American Academy of Religion

Paul Copp is associate professor in Chinese religion and thought at the University of Chicago.