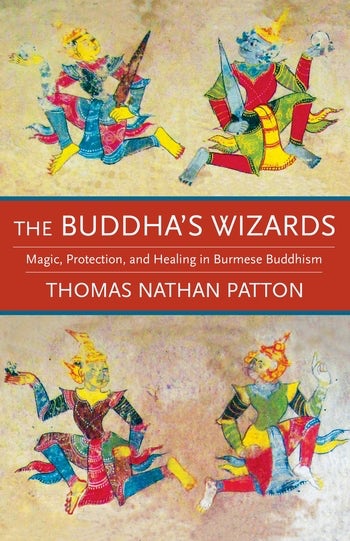 Wizards with magical powers to heal the sick, possess the bodies of their followers, and defend their tradition against outside threats are far from the typical picture of Buddhism. Yet belief in wizard-saints who protect their devotees and intervene in the world is widespread among Burmese Buddhists. The Buddha’s Wizards is a historically informed ethnographic study that explores the supernatural landscape of Buddhism in Myanmar to explain the persistence of wizardry as a form of lived religion in the modern era.

Thomas Nathan Patton explains the world of wizards, spells, and supernatural powers in terms of both the broader social, political, and religious context and the intimate roles that wizards play in people’s everyday lives. He draws on affect theory, material and visual culture, long-term participant observation, and the testimonies of the devout to show how devotees perceive the protective power of wizard-saints. Patton considers beliefs and practices associated with wizards to be forms of defending Buddhist traditions from colonial and state power and culturally sanctioned responses to restrictive gender roles. The book also offers a new lens on the political struggles and social transformations that have taken place in Myanmar in recent years. Featuring close attention to the voices of individual wizard devotees and the wizards themselves, The Buddha’s Wizards provides a striking new look at a little-known aspect of Buddhist belief that helps expand our ways of thinking about the daily experience of lived religious practices.

When hospital visiting hours are over in contemporary Myanmar, Thomas Nathan Patton reports in this compelling book, the supernatural heroes known as weizzā stay behind—in images and statues of them, in dreams, and sometimes in visions—to comfort and embolden the sick. This is one example of how the men and women of modern-day Myanmar make lives for themselves in the everyday company of Buddhist wizard-saints, to the anxious consternation of religious and political authorities. Written with historical depth, attentive throughout to comparative phenomena in other religions, and based on extensive fieldwork, The Buddha’s Wizards is a major contribution to the critical reexamination of lived religion in the modern world. Robert A. Orsi, author of History and Presence

In this path-breaking and richly textured study, Patton presents a much needed revision of the literature on Burmese Buddhist practices. His comprehensive study accounts of the ways in which many lay Buddhists in Myanmar form affective relations with wizards like Bo Min Gaung in dreams, visions, and through their material embodiments of power. Buddhist wizards and the stories about them transcend not only time and space; they also help devotees or fight the threat of Buddhist decline while giving voice to traditional Theravada sentiments. The reader will leave this book with a nuanced understanding of Theravada Buddhist practices as lived religion and its imaginaries that goes far beyond monolithic depictions of Buddhist institutions or texts by showing the reader how followers of the Buddha’s wizards make sense of the world around them. Anthropologists of religion and scholars of Buddhism, Southeast Asia, and especially Myanmar will want to introduce their students to Patton’s wonderful book. Juliane Schober, author of Modern Buddhist Conjunctures in Myanmar: Cultural Narratives, Colonial Legacies, and Civil Society

Patton’s gift to us is that he has opened a door into the mystical and miraculous world of the weizzā, Burmese Buddhism’s furtive wizard-saints. Resisting colonial, state, and institutional religious power, the wizards belong to the people. In affective bonds with their devotees, they disrupt, occupy, heal, and transform. Readers will not forget their encounter with the most potent wizard of all, Grandpa Bo Min Gaung. Grandpa is more proximate and accessible to his devotees than the Buddha himself. Patton’s intimate and vivid ethnographic study of the material and spiritual worlds of lived religion in Myanmar will transform how we think about Buddhism. Jennifer Scheper Hughes, author of Biography of a Mexican Crucifix: Lived Religion and Local Faith from the Conquest to the Present

Beginning from the very first page, Patton whisks us away on an exciting journey through the magical world of the Buddhist wizards of Myanmar. Based on in-depth and long-term ethnographic research, this book provides an intimate and deeply empathetic exploration of the roles wizards play as healers, bestowers of good luck, defenders of the faith, spirit guides and teachers, and, most importantly, as familiar presences in the everyday lives of contemporary Burmese Buddhists. C. Pierce Salguero, author of Buddhism and Medicine: An Anthology of Premodern Sources

In The Buddha’s Wizards, the prose sparkles—the writing is crisp without being dry and evocative without being flowery—and Patton has achieved a nice balance between personal stories, primary research, and secondary source citations. He puts the voices of actual Burmese weizzā and practitioners (both female and male) first and foremost while also drawing upon a plethora of Burmese-language sources. Justin Thomas McDaniel, author of The Lovelorn Ghost and the Magical Monk

An elegant, rich, and thought-provoking study. Thomas Nathan Patton weaves theoretical reflection through graceful ethnographic and historical narrative and in the process develops a sophisticated framework for thinking about religious bodies and their worlds. Donovan Schaefer, author of Religious Affects: Animality, Evolution, and Power

[An] elucidating anthropological monograph on Burmese Buddhism. . . . Filled with absorbing stories of wizards and magic, this book would fit easily into undergraduate or graduate courses on Asian religions and Southeast Asia. Journal of the American Academy of Religion

Eloquently demonstrates the power of studying religions as lived phenomena. I hope it will find readers far and wide, both among specialists and in the undergraduate classroom. Reading Religion

A multilayered history and ethnography. . . . Patton’s work is especially important for the way in which he allows the voices of his informants to be heard. Choice

Acknowledgments
A Note on Abbreviations
A Note on Transliteration
Introduction
1. Vanguards of the Sāsana
2. The Buddha’s Chief Wizard
3. Women of the Wizard King
4. Pagodas of Power
5. Wizards in the Shadows
Conclusion
Notes
References
Index

Thomas Nathan Patton is assistant professor of Buddhist and Southeast Asian studies at the City University of Hong Kong.