From Korean Unification to Transnational Korea 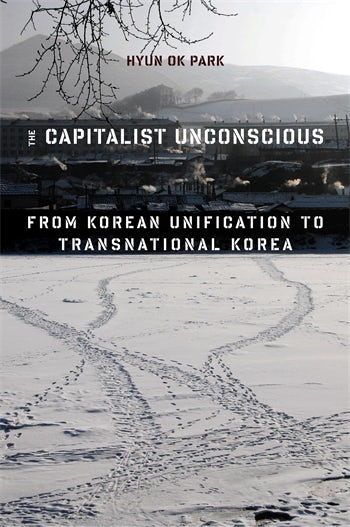 From Korean Unification to Transnational Korea

The unification of North and South Korea is widely considered an unresolved and volatile matter for the global order, but this book argues capital has already unified Korea in a transnational form. As Hyun Ok Park demonstrates, rather than territorial integration and family union, the capitalist unconscious drives the current unification, imagining the capitalist integration of the Korean peninsula and the Korean diaspora as a new democratic moment.

Based on extensive archival and ethnographic research in South Korea and China, The Capitalist Unconscious shows how the hegemonic democratic politics of the post-Cold War era (reparation, peace, and human rights) have consigned the rights of migrant laborers—protagonists of transnational Korea—to identity politics, constitutionalism, and cosmopolitanism. Park reveals the riveting capitalist logic of these politics, which underpins legal and policy debates, social activism, and media spectacle.

While rethinking the historical trajectory of Cold War industrialism and its subsequent liberal path, this book also probes memories of such key events as the North Korean and Chinese revolutions, which are integral to migrants' reckoning with capitalist allures and communal possibilities. Casting capitalist democracy within an innovative framework of historical repetition, Park elucidates the form and content of the capitalist unconscious at different historical moments and dissolves the modern opposition among socialism, democracy, and dictatorship. The Capitalist Unconscious astutely explores the neoliberal present's past and introduces a compelling approach to the question of history and contemporaneity.

A brilliant and ambitious book. . . . The Capitalist Unconscious challenges the Cold War discourse that has dominated the field of Northeast Asian Studies and seeks to replace it with a new one. Contemporary Sociology

Park's book fundamentally challenges existing understandings of Korean unification and will surely redefine debates about the meaning of a transnational Korea. American Journal of Sociology

A stunningly original and significant contribution to a field that seems mired in a Cold War long passed. Not only does Hyun Ok Park seek to untie the knotted problem of the two Koreas, but she also persuasively provides an exemplary guide to how best unveil the interacting entanglements of history and the contemporary moment. Harry Harootunian, Columbia University

One of the most provocative works on North Korea to emerge in years, Hyun Ok Park's The Capitalist Unconscious offers a fresh look at the past twenty years of political and socioeconomic changes in Northeast Asia. Her focus is on labor moving across borders—how it moves, generates wealth, and transforms every place it travels. The two Koreas, we learn, might not be so divided after all. Andre Schmid, University of Toronto

Combining broad theoretical insights into Korea's rapidly changing political economy with vivid ethnographic details of migrant workers' experiences, Hyun Ok Park's The Capitalist Unconscious challenges us to reimagine the region's present, as well as its future. It will provoke lively debates about the construction of 'transnational Korea' in the twenty-first century. Gay Seidman, University of Wisconsin-Madison

Hyun Ok Park teaches sociology at York University. She writes about global capitalism, transnational migration, empire, postcolonialism, and the issues of comparison and comparability. She is the author of Two Dreams in One Bed: Empire, Social Life, and the Origins of the North Korean Revolution in Manchuria.