The China-U.S. Trade War and Their Future Economic Relations 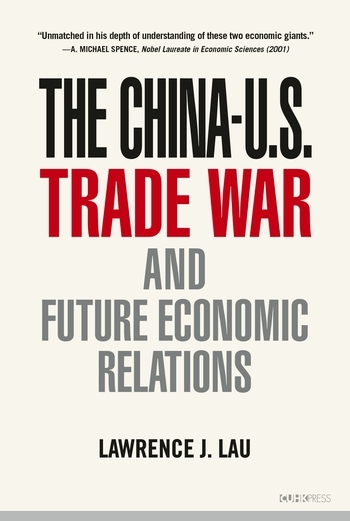 The China-U.S. Trade War and Their Future Economic Relations

Some believe in the “Thucydides Trap": the idea that, since a rising power will challenge the dominance of an established one, a China-U.S. trade war will be inevitable. Being the largest and the second largest trading nations globally, the U.S. and China are in fact each other's most important trading partners, among many aspects of their complex interrelationships.

In this book, Lawrence J. Lau examines various economic statistics of the past few decades to show that while the real effects of the China-U.S. trade war in 2018 are not negligible, they are relatively manageable for both nations. There is no need to panic, despite psychological effects on the Chinese stock markets and on the renminbi exchange rate. Behind the trade war is the potential economic and technological competition between China and the U.S., which is likely to become the “new normal." It is up to each government to battle against the rise of xenophobia, based on the fact that China-U.S. economic collaboration is a potentially positive-sum game through better coordination and fully utilizing each other's currently underutilized resources. Balancing China-U.S. trade and enhancing economic interdependence are not only possible, but desirable.

Everyone, everywhere, is potentially affected by events in the world’s two largest economies, the United States and China. Lau’s timely book is full of careful analysis, penetrating insight, and helpful suggestions from the world’s preeminent economist on this relationship. Michael J. Boskin, Stanford University

This study should be read carefully by anyone working on these issues for their governments, for the press, as well as any individual citizen who wants to understand the issues. Dwight H. Perkins, Harvard University

Economists, executives and China watchers will appreciate this straightforward analysis of a complicated issue. Business Today

Lawrence J. Lau is Kwoh-Ting Li Professor in Economic Development Emeritus at Stanford University and Ralph and Claire Landau Professor of Economics at The Chinese University of Hong Kong.