The Cold War on the Periphery

The United States, India, and Pakistan 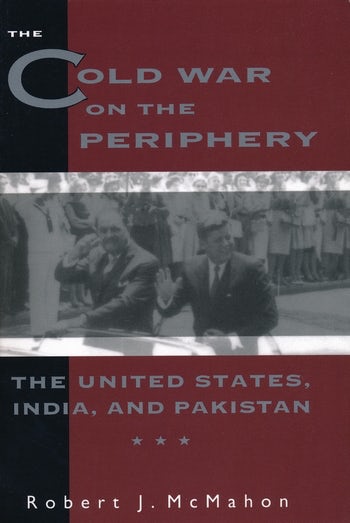 The Cold War on the Periphery

The United States, India, and Pakistan

Focusing on the two tumultuous decades framed by Indian independence in 1947 and the Indo-Pakistani war of 1965, The Cold War on the Periphery explores the evolution of American policy toward the subcontinent. McMahon analyzes the motivations behind America's pursuit of Pakistan and India as strategic Cold War prizes. He also examines the profound consequences—for U.S. regional and global foreign policy and for South Asian stability—of America's complex political, military, and economic commitments on the subcontinent.

McMahon argues that the Pakistani-American alliance, consummated in 1954, was a monumental strategic blunder. Secured primarily to bolster the defense perimeter in the Middle East, the alliance increased Indo-Pakistani hostility, undermined regional stability, and led India to seek closer ties with the Soviet Union. Through his examination of the volatile region across four presidencies, McMahon reveals the American strategic vision to have been "surprinsgly ill defined, inconsistent, and even contradictory" because of its exaggerated anxiety about the Soviet threat and America's failure to incorporate the interests and concerns of developing nations into foreign policy.

The Cold War on the Periphery addresses fundamental questions about the global reach of postwar American foreign policy. Why, McMahon asks, did areas possessing few of the essential prerequisites of economic-military power become objects of intense concern for the United States? How did the national security interests of the United States become so expansive that they extended far beyond the industrial core nations of Western Europe and East Asia to embrace nations on the Third World periphery? And what combination of economic, political, and ideological variables best explain the motives that led the United States to seek friends and allies in virtually every corner of the planet?

McMahon's lucid analysis of Indo-Pakistani-Americna relations powerfully reveals how U.S. policy was driven, as he puts it, "by a series of amorphous—and largely illusory—military, strategic, and psychological fears" about American vulnerability that not only wasted American resources but also plunged South Asia into the vortex of the Cold War.

A magnificent book, written with remarkable clarity... The best book we have on the process of American involvement in South Asia, 1945-1965, and a critique of Cold War policies in the Third World. Reviews in American History