Edited, with a critical introduction, by Xiaomei Chen 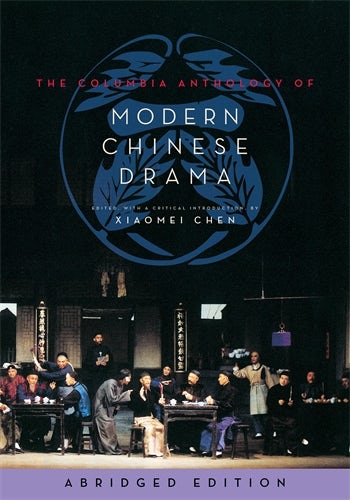 Edited, with a critical introduction, by Xiaomei Chen

This condensed anthology reproduces close to a dozen plays from Xiaomei Chen's well-received original collection, The Columbia Anthology of Modern Chinese Drama, along with her critical introduction to the historical, cultural, and aesthetic evolution of twentieth-century Chinese spoken drama. Comprising representative works from the Republican era to postsocialist China, the book encapsulates the revolutionary rethinking of Chinese theater and performance that began in the late Qing dynasty and vividly portrays the uncertainty and anxiety brought on by modernism, socialism, political conflict, and war.

Chosen works from 1919 to 1990 also highlight the formation of national and gender identities during a period of tremendous social, cultural, and political change in China and the genesis of contemporary attitudes toward the West. PRC theater tracks the rise of communism, juxtaposing ideals of Chinese socialism against the sacrifices made for a new society. Post-Mao drama addresses the nation's socialist legacy, its attempt to reexamine its cultural roots, and postsocialist reflections on critical issues such as nation, class, gender, and collective memories. An essential, portable guide for easy reference and classroom use, this abridgment provides a concise yet well-rounded survey of China's theatricality and representation of political life. The original work not only established a canon of modern Chinese drama in the West but also made it available for the first time in English in a single volume.

The Columbia Anthology of Modern Chinese Drama is a great piece of historical and analytical scholarship, evincing a breadth of history and depth of ideological critique hard to find in critics preoccupied with body and performance. The plays are not simply material for historical survey; their line-up forms an argument on China's pursuit of modernity, social justice, and equality. Ban Wang, Stanford University

Xiaomei Chen is professor of Chinese literature at the University of California at Davis. She is the author of Occidentalism: A Theory of Counter-Discourse in Post-Mao China and Acting the Right Part: Political Theater and Popular Culture in Contemporary China; editor of Reading the Right Text: An Anthology of Contemporary Chinese Drama; and coeditor of East of West: Cross-cultural Performance and the Staging of Difference. Her book Staging Chinese Revolution: Founding Fathers, Red Classics, and Revisionist Histories of Twentieth-Century China is forthcoming from Columbia University Press.