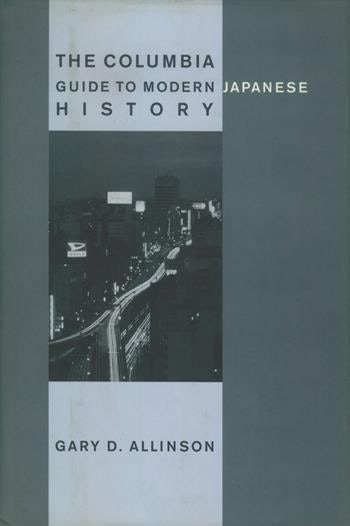 Japan's transformation from an isolated society to a military empire and, after a crushing defeat in World War II, into one of the world's foremost economic powers is one of the most fascinating stories of modern history. Although much has been written about modern Japan, no reference book has analyzed its political, economic, social, and cultural history to render a holistic account of the sweeping changes Japan has undergone since 1850. Now, with The Columbia Guide to Modern Japanese History, Gary D. Allinson presents this much-needed learning resource for students of Japanese society and for lay readers seeking to better understand the economic powerhouse of East Asia during the 150 years that have catapulted it to international preeminence.

The Columbia Guide to Modern Japanese History is a unique work in which readers will find:

 a balanced narrative treating each facet of Japanese history—political, social, economic, and cultural—across four periods covering the years from 1850 to the present;

 an annotated guide to further research, including print, film, and electronic resources.

Readily accessible to all readers, Allinson's reference will be one that citizens, teachers, students, and academicians will consult often as they seek information on scores of topics. The Columbia Guide to Modern Japanese History will endure as a valuable reference and learning tool for many years to come.

This is a very good book... [Allinson's] historical narrative is excellent. It is spare in the trivia that hinder general readers, and rich in analysis and interpretation. Louis G. Perez, Journal of Asian History

In the Columbia Guide, Gary Allinson has given us an innovative and reliable narrative and usable reference tools for Japan's modern history. It has practical value as an introduction to the study of Japan and as a reference volume for Japanologists. Thomas W. Burkman, The Journal of Asian Studies

Gary D. Allinson is the Ellen Bayard Weedon Professor of East Asian Studies at the University of Virginia. His many works on the social, economic, political, urban, and labor history of modern Japan include Japanese Urbanism, Suburban Tokyo, Political Dynamics in Contemporary Japan, and Japan's Postwar History.