The Columbia Sourcebook of Literary Taiwan 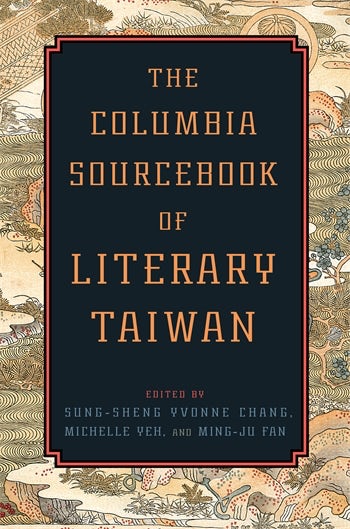 The Columbia Sourcebook of Literary Taiwan

This sourcebook contains more than 160 documents and writings that reflect the development of Taiwanese literature from the early modern period to the twenty-first century. Selections include seminal essays in literary debates, polemics, and other landmark events; interviews, diaries, and letters by major authors; critical and retrospective essays by influential writers, editors, and scholars; transcripts of historical speeches and conferences; literary-society manifestos and inaugural journal prefaces; and governmental policy pronouncements that have significantly influenced Taiwanese literature.

These texts illuminate Asia's experience with modernization, colonialism, and postcolonialism; the character of Taiwan's Cold War and post–Cold War cultural production; gender and environmental issues; indigenous movements; and the changes and challenges of the digital revolution. Taiwan's complex history with Dutch, Spanish, and Japanese colonization; strategic geopolitical position vis-à-vis China, Japan, and the United States; and status as a hub for the East-bound circulation of technological and popular-culture trends make the nation an excellent case study for a richer understanding of East Asian and modern global relations.

This book is a tour de force, bringing together many of the most important documents relating to the history of Taiwan literary criticism and firsthand reflections on writing and the literary scene from leading writers, playwrights, and poets. This volume offers a translation of an impressive array of critical writings on literature into English for the very first time. No other book is quite like it, certainly not in English, and perhaps not even in Chinese. Michael Berry, author of A History of Pain and Speaking in Images

This vast, poignant, and important sourcebook bears out Taiwan's unique history of literary culture. In these pages we hear a wide range of voices from writers of different times. A must read for anyone who wants to discover the real Taiwan. Kang-i Sun Chang, Yale University

A treasure trove of writing that offers an intimate view into the complex literary culture of Taiwan across the twentieth century and beyond. In texts ranging from solemn essays and manifestos to diary entries and zany letters to the editor, one watches the ebb and flow of the central questions of Taiwanese literature. The selection and organization of the materials immerse the reader in the various 'debates' (lunzhan) about language, literature, and society as they unfolded in the public discourse within Japanese colonial modernity, Nationalist authoritarian rule, and the new civil society of post–martial law democracy. These fascinating primary works are contextualized with a variety of supporting materials, making the volume particularly useful for teaching the literary and social culture of Taiwan. Joseph R. Allen, University of Minnesota, Twin Cities

Remarkable for its intellectual breadth, this volume represents a full spectrum of views, including some that are flatly opposed. A valuable research tool for many years to come. Perry Link, University of California, Riverside

This landmark publication will become a guide and inspiration for anyone with an interest in the literature of Taiwan. The sheer range of its materials and the high quality of its translations make this sourcebook an extraordinary contribution to the field. Margaret Hillenbrand, University of Oxford

The editors of The Columbia Sourcebook of Literary Taiwan have made a remarkable contribution to Taiwanese literary studies by reconstructing these literary fragments—the knit and purl of the deconstructed sweater—into a historical narrative of literary rebellion. Taiwan Review

Extraordinarily useful... Every library of every university with students studying Taiwanese writing in translation will want to order a copy... students will for sure be waiting in long lines to use it. Taipei Times

The Columbia Sourcebook of Literary Taiwan is a true feat of archival compilation.... The most expansive volume documenting the evolution of literary culture in modern Taiwan available in English.... A crucial index of seismic cultural shifts.... The sourcebook should serve as a reminder that Taiwan retains a vibrant, sophisticated literary culture even in the Internet age of digital media. The Journal of Asian Studies

Sung-sheng Yvonne Chang is professor of Chinese and comparative literature at the University of Texas at Austin. She is author of Literary Culture in Taiwan: Martial Law to Market Law; Transformations of a Literary Field: On Contemporary Taiwanese Fiction; and Modernism and the Nativist Resistance: Contemporary Chinese Fiction from Taiwan. She is the editor of Bamboo Shoots After the Rain: Contemporary Stories by Women Writers of Taiwan.

Ming-ju Fan is professor and director of the Graduate Institute of Taiwanese Literature at the National Chengchi University in Taiwan. Her books in Chinese include Literary Geography: Spatial Reading of Taiwanese Fiction; Chronological Searches of Taiwanese Women's Fiction; and Like a Box of Chocolate: Criticism on Contemporary Literature and Culture.