Terry Williams and Trevor B. Milton 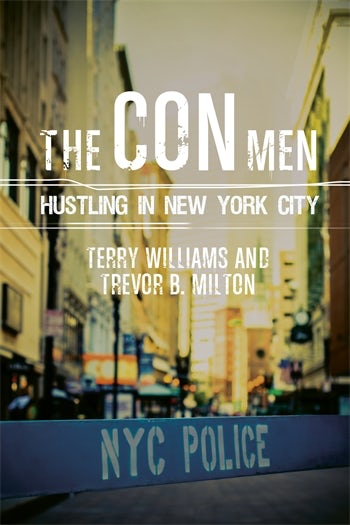 Terry Williams and Trevor B. Milton

This vivid account of hustling in New York City explores the sociological reasons why con artists play their game and the psychological tricks they use to win it. Terry Williams and Trevor B. Milton, two prominent sociologists and ethnographers, spent years with New York con artists to uncover their secrets. The result is an unprecedented view into how con games operate, whether in back alleys and side streets or in police precincts and Wall Street boiler rooms.

Whether it's selling bootleg goods, playing the numbers, squatting rent-free, scamming tourists with bogus stories, selling knockoffs on Canal Street, or crafting Ponzi schemes, con artists use verbal persuasion, physical misdirection, and sheer charm to convince others to do what they want. Williams and Milton examine this act of performance art and find meaning in its methods to exact bounty from unsuspecting tourists and ordinary New Yorkers alike. Through their sophisticated exploration of the personal experiences and influences that create a successful hustler, they build a portrait of unusual emotional and psychological depth. Their work also offers a new take on structure and opportunity, showing how the city's unique urban and social architecture lends itself to the perfect con.

Part sociology, part psychology, and always interesting history, The Con Men is a valuable tool in understanding how this small community, living in a gray market, manages to survive in a society that for the most part rejects and disdains them. Patrick O'Reilly, author of Undue Influence: Cons, Scams, and Mind Control

The Con Men is a revealing portrait of a critical but little known element of city life: the urban hustler. Terry Williams and Trevor B. Milton go deep and emerge with the goods, powerfully illuminating this subterranean world and the social lives of its inhabitants. At once timely, incisive, and poignant, this is a fascinating work of lasting importance. Elijah Anderson, author of Code of the Street and The Cosmopolitan Canopy

This terrific ethnography explains that cons and hustles are no longer the preserve of roguish proletarians in loud suits and painted ties. Everybody wants a bargain, and creative capitalism makes mugs of us all. Dick Hobbs, Times Higher Education

[Williams and Milton] bring the reader with them into places from Brooklyn to the Bronx that are supposed to be invisible to those not in the know. . . . An engaging read. Malcolm Harris, The New Republic

A fascinating look at the New York underworld. Integrating history, social psychology and sociology, the authors provide an educated lens to examine some of the oldest cons in Manhattan, perpetuated by the hands of career schemers, counterfeiters, drug dealers and even the men and women in blue. It is an eye-opening initiation to the uninformed or the curious. Jeffrey S. Podoshen, Consumption Markets & Culture

With its colorful characters, spotlight on hidden social worlds, and highly accessible writing style, I can see instructors using this book in their social deviance and criminology courses to great effect. Richard E. Ocejo, Contemporary Sociology

[The Con Men] provides an interesting, original, and updated account of how the social transformations of New York between the 1990s and 2000s were experienced by some of its most struggling inhabitants. . . . There is a five-page glossary of the colorful street vernacular that permeates the participant’s language. This was both helpful and entertaining to this reader, from the bodegas and bottom women to the tools and the touts. Kim Moeller, Criminal Justice Review

Read the introduction of THE CON MEN: HUSTLING IN NEW YORK CITY, by Terry Williams and Trevor B. Milton. A hard-edged guide to New York City swindles, street life, and culture, through direct interviews with con artists and hustlers.

Terry Williams is professor of sociology at the New School for Social Research. He specializes in teenage life and culture, drug abuse, crews and gangs, and violence and urban social policy. He is the author of TeenageSuicide Notes: An Ethnography of Self-Harm (Columbia, 2017); Harlem Supers: The Social Life of a Community in Transition (2015); Crackhouse: Notes from the End of the Line (1993); and The Cocaine Kids: The Inside Story of a Teenage Drug Ring (1989); and is the founder and director of the Harlem Writers Crew Project, a multimedia approach to urban education for center city and rural youths.

Trevor B. Milton is assistant professor of sociology and criminal justice at Queensborough Community College, CUNY. He is the author of Overcoming the Magnetism of Street Life: Crime-Engaged Youth and the Programs That Transform Them and the director of the documentary Modern Racism (2018). His areas of research include prison reform and alternative-to-incarceration programs and the intersectionality of class and racial identity.