The Dalai Lama and the Emperor of China

A Political History of the Tibetan Institution of Reincarnation 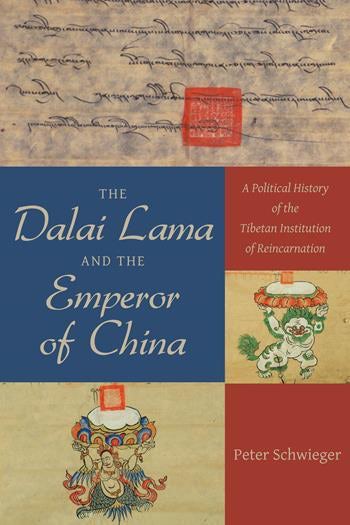 The Dalai Lama and the Emperor of China

A Political History of the Tibetan Institution of Reincarnation

A major new work in modern Tibetan history, this book follows the evolution of Tibetan Buddhism's trülku (reincarnation) tradition from the seventeenth to the nineteenth centuries, along with the Emperor of China's efforts to control its development. By illuminating the political aspects of the trülku institution, Schwieger shapes a broader history of the relationship between the Dalai Lama and the Emperor of China, as well as a richer understanding of the Qing Dynasty as an Inner Asian empire, the modern fate of the Mongols, and current Sino-Tibetan relations.

Unlike other pre-twentieth-century Tibetan histories, this volume rejects hagiographic texts in favor of diplomatic, legal, and social sources held in the private, monastic, and bureaucratic archives of old Tibet. This approach draws a unique portrait of Tibet's rule by reincarnation while shading in peripheral tensions in the Himalayas, eastern Tibet, and China. Its perspective fully captures the extent to which the emperors of China controlled the institution of the Dalai Lamas, making a groundbreaking contribution to the past and present history of East Asia.

The most accessible, archives-based survey of modern Tibetan history ever to be written. Gray Tuttle, Columbia University

A timely book that fills a vacuum in the study of Tibet's history. Schwieger provides an excellent analysis of the evolution of the institution of the Dalai Lama, particularly the Dalai Lama's relationship with the Chinese emperors, that goes beyond the generalized and accepted view of the relationship as symbolic. Tsering Shakya, president of the International Association of Tibetan Studies

The Dalai Lama and the Emperor of China marks a coming-of-age for Tibetan historical studies, complementing the New Qing History of the past several decades. Peter Schwieger brings precision to our understanding of Tibet's central political institution, that of the Dalai Lama, reaching beyond earlier scholarship thanks to his innovative and thorough use of archival sources. His work is essential reading for students of early modern relations among Tibet, Mongolia, and the Manchu empire. Matthew Kapstein, EPHE, Paris, and the University of Chicago

There is much to discover in this rich, informative volume. Skillfully handling the new sources and documents at his disposal, Schwieger has written a book that is essential reading for anyone, specialist and nonspecialist, interested in the rise of the Dalai Lamas and their relations with Mongols, Manchus, and the Qing state. Elliot Sperling, Indiana University

The originality of this remarkable book lies in the central position it accords to Tibetan documents—letters, edicts, petitions—written at the time of the events to which they relate, giving the reader an unprecedented front-row view of history as it unfolds: things do indeed look very different from this close. Schwieger's mastery of the intractable style of these official sources is matched by a well-trained caution in interpretation, a complete absence of political bias, and the ability to transform eight centuries of complex machinations into a gripping account that will appeal to a readership well beyond the field of Tibetan studies. Charles Ramble, EcolePratique des Hautes Etudes, Paris

Schwieger's groundbreaking treatment of Tibetan political and religious history offers a new approach to understanding the development of the trülku (reincarnate lama) tradition.... Indispensable reading for some upper-level undergraduates and for graduate students and faculty interested in Tibetan religious and political history. Choice

The most well-researched, comprehensive book on the modern history of Tibet to be published to date. Reading Religion

Accessible... engaging and easy to read. The book is a great addition to any undergraduate or graduate course on the history of Inner Asia, Tibet, and Late Imperial China. Ryan John Jones, Religious Studies Review

[The Dalai Lama and the Emperor of China] does Tibetan studies a great service.... An essential resource. Max Oidtmann, The Journal of Asian Studies

Read an excerpt from the Introduction on the development of the Tibetan trülku concept:

Peter Schwieger is professor of Tibetology and the head of the Department of Mongolian and Tibetan Studies at the University of Bonn, Germany. His current research focuses on the political and social history of Tibet based on archival material.