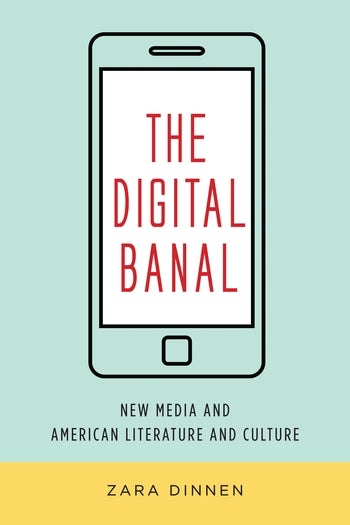 Contemporary culture is haunted by its media. Yet in their ubiquity, digital media have become increasingly banal, making it harder for us to register their novelty or the scope of the social changes they have wrought. What do we learn about our media environment when we look closely at the ways novelists and filmmakers narrate and depict banal use of everyday technologies? How do we encounter our own media use in scenes of waiting for e-mail, watching eBay bids, programming as work, and worrying about numbers of social media likes, friends, and followers?

Zara Dinnen analyzes a range of prominent contemporary novels, films, and artworks to contend that we live in the condition of the “digital banal,” not noticing the affective and political novelty of our relationship to digital media. Authors like Jennifer Egan, Dave Eggers, Sheila Heti, Jonathan Lethem, Gary Shteyngart, Colson Whitehead, Mark Amerika, Ellen Ullman, and Danica Novgorodoff and films such as The Social Network and Catfish critique and reveal the ways in which digital labor isolates the individual; how the work of programming has become an operation of power; and the continuation of the “Californian ideology,” which has folded the radical into the rote and the imaginary into the mundane. The works of these writers and artists, Dinnen argues, also offer ways of resisting the more troubling aspects of the effects of new technologies, as well as timely methods for seeing the digital banal as a politics of suppression. Bridging the gap between literary studies and media studies, The Digital Banal recovers the shrouded disturbances that can help us recognize and antagonize our media environment.

Zara Dinnen clearly and forcefully articulates the importance of her new concept, the "digital banal," as well as the way it plays out across multiple social and aesthetic practices. Nothing could be more fundamentally important than the everyday, now utterly embedded in the digital. The Digital Banal empowers us not just to see ourselves as we now are but to become active participants in everyday digital life. Lori Emerson, University of Colorado, Boulder

This brilliant study reads current novels, films, TV shows, and web texts to illuminate the everydayness of our interactions with and through digital media, astutely defamiliarizing the banality of those interactions. Dinnen shows how contemporary subjectivity is co-created through platforms like Facebook that feel like authentic vehicles of interpersonal connection but emanate from coding and stored data. Posthumanism, feminism, affect studies, resistance, fandom, and a geeky familiarity with what happens under the hood of mediated communication come together here in a wonderfully original and consequential book. Robyn Warhol, Ohio State University

The Digital Banal casts a keen critical eye over the contemporary cultural field and helps us to see digital media in all of its non-spectacular banality, both always there and always on, ordinary and inevitable, normal and normative. Through her perceptive textual analyses, Dinnen in effect defamiliarizes the digital banal, and thereby makes possible a recognition of its latent political potential. A must-read for scholars of contemporary literature and media alike. Rita Raley, University of California, Santa Barbara

Through an archive of texts that uncover the modes of digital effacement and banality, Dinnen capably shows depictions of both resistance and representation in the face of that obfuscation. Christopher W. Clark, The Journal of American Culture

Dinnen displays impressive critical range across a suite of narrative media forms. . . . At a time when so much seems perpetually in crisis, Zara Dinnen shows us how to think about this very problem, by giving us vital tools for reading the complexities of the present and continuing important conversations between disciplines afresh. James J. Hodge, Studies in the Novel

Zara Dinnen is lecturer in twentieth and twenty-first century literature at Queen Mary University of London. She is coeditor of The Edinburgh Companion to Contemporary Narrative Theories (2018).