Secularism in the Silent Era 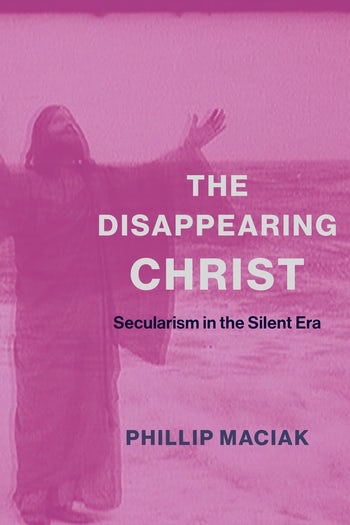 Secularism in the Silent Era

At the turn of the twentieth century, American popular culture was booming with opportunities to see Jesus Christ. From the modernized eyewitness gospel of Ben-Hur to the widely circulated passion play films of Edison, Lumière, and Pathé; from D. W. Griffith’s conjuration of a spectral white savior in Birth of a Nation to W. E. B. Du Bois’s “Black Christ” story cycle, Jesus was constantly and inventively visualized across media, and especially in the new medium of film. Why, in an era traditionally defined by the triumph of secular ideologies and institutions, were so many artists rushing to film Christ’s miracles and use his story and image to contextualize their experiences of modernity?

In The Disappearing Christ, Phillip Maciak examines filmic depictions of Jesus to argue that cinema developed as a model technology of secularism, training viewers for belief in a secular age. Negotiating between the magic trick and the documentary image, the conflicting impulses of faith and skepticism, the emerging aesthetic of film in this period visualized the fraught process of secularization. Cinematic depictions of an appearing and disappearing Christ became a powerful vehicle for Americans to navigate a rapidly modernizing society. Studying these films alongside a multimedia, interdisciplinary archive of novels, photographs, illustrations, and works of theology, travel writing, and historiography, The Disappearing Christ offers a new narrative of American cultural history at the intersection of cinema studies and religious studies.

Clearly written and carefully argued, The Disappearing Christ offers an insightful reading of secularism—and rightly of both religion and race—in American film and visual culture. In doing so, Maciak opens up exciting new space in the study of the secular. Josef Sorett, author of Spirit in the Dark: A Religious History of Racial Aesthetics

In developing the idea of an aesthetics of “spectacular realism,” Phillip Maciak offers an indispensable account of early cinema’s imbrication with secularization in the United States. With keen attention to matters of form and sensitivity to historical discourses of faith, spectatorship, and modernity, The Disappearing Christ changes our understanding of film history and theory by excavating the forgotten yet crucial dynamic of religion and secularism so central to early cinema and its world. Allyson Nadia Field, author of Uplift Cinema: The Emergence of African American Film and the Possibility of Black Modernity

With great agility and persuasive writerly verve, Maciak brings the conceptual idioms of postsecular critique to bear on the aesthetics of early cinema. In its attention to cinematic form, to aesthetic and intellectual history, and to the shifting terrains of religiosity, The Disappearing Christ is a fine achievement. Peter Coviello, author of Make Yourselves Gods: Mormons and the Unfinished Business of American Secularism

The Disappearing Christ retells the story of secularization, firmly placing visual media within that narrative. Maciak alters the ongoing conversation on secularization for the present day. S. Brent Plate, author of Religion and Film: Cinema and the Re-Creation of the World

Phillip Maciak teaches English and American culture studies at Washington University in St. Louis. He is an editor at the Los Angeles Review of Books.