The Disclosure of Politics

Struggles Over the Semantics of Secularization 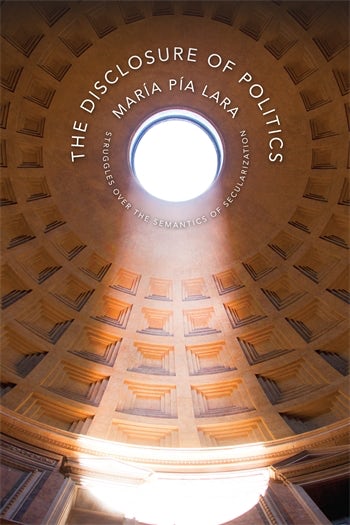 The Disclosure of Politics

Struggles Over the Semantics of Secularization

Postmodern political critiques speak of the death of ideology, the end of history, and the postsecular return of religious attitudes, yet radical conservative theorists such as Mark Lilla argue religion and politics are inextricably intertwined. Returning much-needed uncertainty to debates over the political while revitalizing the very terms in which they are defined, María Pía Lara explores the ambiguity of secularization and the theoretical potential of a structural break between politics and religion.

For Lara, secularization means three things: the translation of religious semantics into politics; a transformation of religious notions into political ideas; and the reoccupation of a space left void by changing political actors that gives rise to new conceptions of political interaction. Conceptual innovation redefines politics as a horizontal relationship between governments and the governed and better enables societies (and individual political actors) to articulate meaning through action—that is, through the emergence of new concepts. These actions, Lara proves, radically transform our understanding of politics and the role of political agents and are further enhanced by challenging the structural dependence of politics on religious phenomena.

Skillfully employing the tools of 'conceptual history,' María Pía Lara maps the convoluted discourse of secularization in Carl Schmitt, Hans Blumenberg, Karl Löwith, Hannah Arendt, Jürgen Habermas, and the father of Begriffsgeschichte himself, Reinhart Koselleck. The result is not only a masterful vindication of a method but also a challenge to the glib assumption that we have reached a postsecular era in which politica powerful case for a democratic politics of immanence only disclosed in a modern age facing problems that no restoration of a presecular past can solve.s can be traced back to its allegedly theological roots. Instead, Lara makes Martin Jay, University of California, Berkeley

The Disclosure of Politics is itself disclosive. Counterbalancing the current focus on religion as a semantic resource for politics, María Pía Lara shows how political theory and action contribute to the development of powerful political concepts such as publicity, emancipation, and democracy and enables us to see the importance of conceptual innovation in bringing about social change for the better. Maeve Cooke, University College Dublin

Acknowledgments
Introduction
1. The Semantics of Conceptual Change: The Emergence of the Concept of Emancipation
2. The Model of Translation: From Religion to Politics
3. Hans Blumenberg's Reoccupational Model: Conceptual Transformation
4. Blumenberg's Second Model: The Persistence of Mythical Narratives
5. Hannah Arendt's Model of the Autonomy of Politics: Semantic Innovation Through Religious Disclosure
6. Reinhart Koselleck's Model of Secularization: The Enlightenment as Problematic
7. Jürgen Habermas's Innovation Model: Bringing Justice Into the Domain of Politics
8. The Disclosure of Politics Revisited
Bibliography
Index

María Pía Lara teaches moral and political philosophy at the Universidad Autónoma Metropolitana in Mexico City. She is a renowned and influential public intellectual and has published many articles on the subjects of critical theory, moral philosophy, and politics. She is also the author of Narrating Evil: A Postmetaphysical Theory of Reflective Judgment and Moral Textures and the editor of Rethinking Evil.