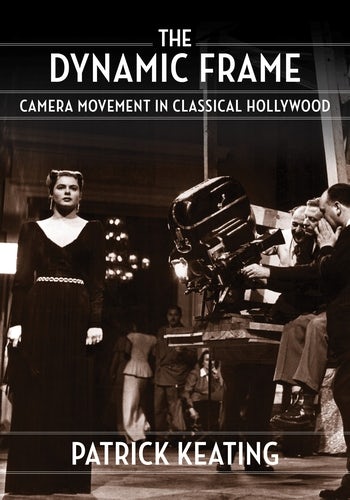 The camera’s movement in a film may seem straightforward or merely technical. Yet skillfully deployed pans, tilts, dollies, cranes, and zooms can express the emotions of a character, convey attitude and irony, or even challenge an ideological stance. In The Dynamic Frame, Patrick Keating offers an innovative history of the aesthetics of the camera that examines how camera movement shaped the classical Hollywood style.

In careful readings of dozens of films, including Sunrise, The Grapes of Wrath, Rear Window, Sunset Boulevard, and Touch of Evil, Keating explores how major figures such as F. W. Murnau, Orson Welles, and Alfred Hitchcock used camera movement to enrich their stories and deepen their themes. Balancing close analysis with a broader poetics of camera movement, Keating uses archival research to chronicle the technological breakthroughs and the changing division of labor that allowed for new possibilities, as well as the shifting political and cultural contexts that inspired filmmakers to use technology in new ways. An original history of film techniques and aesthetics, The Dynamic Frame shows that the classical Hollywood camera moves not to imitate the actions of an omniscient observer but rather to produce the interplay of concealment and revelation that is an essential part of the exchange between film and viewer.

Camera movement, while widely acknowledged as a major aspect of film style and narration, has not had a historical study devoted to it and certainly has not been probed with the degree of specific analysis that Keating uses here. The combination of detailed careful viewing of a wide range of films in order to isolate significant instances of camera movement and the ability to provide an overview of the issues discussed by cinematographers, directors, and critics in the era the films were made is literally something no other scholar has done—and I would add probably no other scholar could do so well. The Dynamic Frame should become a classic in film studies literature. Tom Gunning, University of Chicago

This book will become the definitive study of moving camera in American cinema during this period. I know of no other work approaching the depth, quality, and comprehensiveness of this book. Charles Maland, University of Tennessee

Through two masterful volumes on basic techniques of American cinema across the decades, Patrick Keating has essentially rewritten the history of cinematic style from the ground up in productive fashion. As he did for lighting practices in the stunning Hollywood Lighting, Keating once again combines sharp, smart primary research; concrete and complex close reading; and far-ranging cultural reflection to capture precise ways movies told resonant stories rich in visual impact. Dana Polan, New York University

Patrick Keating provides his requisite impeccably researched analysis, once again upending what we think we know about cinema history. As the leading scholar of cinematography in cinema and media studies, Keating challenges and enriches our understanding of the moving camera in classical Hollywood as well as the studio era’s aesthetic debates. Keating’s close viewings, technological expertise, and precise language provide a lively and rigorous account essential to one of cinema’s most complex but understudied areas. Julie Turnock, University of Illinois at Urbana-Champaign

Patrick Keating is associate professor of communication at Trinity University, where he teaches courses in film studies and video production. He is the author of Hollywood Lighting from the Silent Era to Film Noir (Columbia, 2010).