A History of Radical Environmentalism 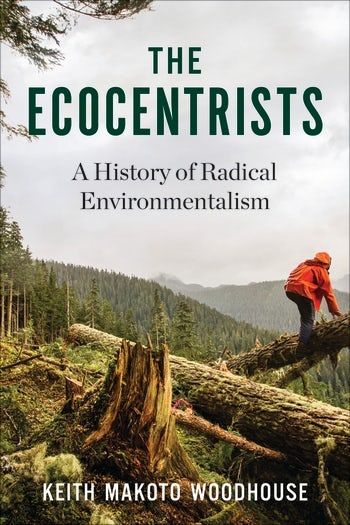 A History of Radical Environmentalism

Disenchanted with the mainstream environmental movement, a new, more radical kind of environmental activist emerged in the 1980s. Radical environmentalists used direct action, from blockades and tree-sits to industrial sabotage, to save a wild nature that they believed to be in a state of crisis. Questioning the premises of liberal humanism, they subscribed to an ecocentric philosophy that attributed as much value to nature as to people. Although critics dismissed them as marginal, radicals posed a vital question that mainstream groups too often ignored: Is environmentalism a matter of common sense or a fundamental critique of the modern world?

In The Ecocentrists, Keith Makoto Woodhouse offers a nuanced history of radical environmental thought and action in the late-twentieth-century United States. Focusing especially on the group Earth First!, Woodhouse explores how radical environmentalism responded to both postwar affluence and a growing sense of physical limits. While radicals challenged the material and philosophical basis of industrial civilization, they glossed over the ways economic inequality and social difference defined people’s different relationships to the nonhuman world. Woodhouse discusses how such views increasingly set Earth First! at odds with movements focused on social justice and examines the implications of ecocentrism’s sweeping critique of human society for the future of environmental protection. A groundbreaking intellectual history of environmental politics in the United States, The Ecocentrists is a timely study that considers humanism and individualism in an environmental age and makes a case for skepticism and doubt in environmental thought.

Woodhouse deftly brings together the intellectual history of the many threads of American environmentalism with the thinkers, the activists, the organizations, and the issues that have charged environmental politics since the 1960s. Required reading for anyone with a serious interest in the history of environmental activism and thought. James Morton Turner, Wellesley College

This book is a profound achievement. In The Ecocentrists, Keith Woodhouse examines ecocentrism within and up against traditions of radical American protest, politics, and action. Deepening our understanding of radical environmentalism well beyond any previous study, the book lays to rest caricature and misinformation. Each chapter—each page—will make you think hard. William Deverell, University of Southern California

A compelling story about the enigmatic journey of environmentalism since the 1960s, The Ecocentrists shines a bright light on the radical potential and heartbreaking pitfalls of Americans’ ecological crusades. Highlighting the historic and contemporary tensions within the environmental movement between localism and globalism, populism and elitism, freedom and limits, and humanism and misanthropy, Woodhouse provides essential reading for anyone interested in thinking through how efforts to create a healthier planet can be made as just and humane as possible. Darren Frederick Speece, author of Defending Giants: The Redwood Wars and the Transformation of American Environmental Politics

The Ecocentrists captures eloquently the human stories of those who stood up for the nonhuman world. Keith Woodhouse’s willingness to take seriously the most radical members of the environmental movement yields fresh ways of understanding conventional environmental politics. A smart, rigorous, and brilliant book. Kendra Smith-Howard, University of Albany

Insightful and well-grounded in the literature, this is required reading for historians of environmentalism and modern political movements and, for the general reader, a stimulating introduction to an urgent area of popular concern. Publishers Weekly

His book is strongest when it contextualizes radical environmentalism in relation to broader ideologies (liberalism, conservatism, libertarianism, anarchism)....Recommended. Choice

This outstanding and extensively researched work, covers a wide range of ideas and personalities; an essential additional for all environmental collections. Library Journal (starred review)

In the era of climate change, Woodhouse wonders if the ecocentrists’ narrative of crisis is the only one that can create a clear-eyed view of the problem, as well as the political and popular will to mobilize against it. Los Angeles Review of Books

Preface
Introduction
1. Ecology and Revolutionary Thought
2. Crisis Environmentalism
3. A Radical Break
4. Public Lands and the Public Good
5. Earth First! Against Itself
6. The Limits and Legacy of Radicalism
Conclusion
Notes
Index

Keith Makoto Woodhouse is an assistant professor at Northwestern University, where he teaches in the History Department and the Environmental Policy and Culture Program.