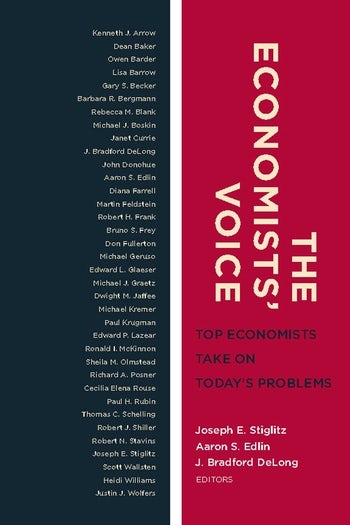 In this valuable resource, more than thirty of the world's top economists offer innovative policy ideas and insightful commentary on our most pressing economic issues, such as global warming, the global economy, government spending, Social Security, tax reform, real estate, and political and social policy, including an extensive look at the economics of capital punishment, welfare reform, and the recent presidential elections.

Contributors are Nobel Prize winners, former presidential advisers, well-respected columnists, academics, and practitioners from across the political spectrum. Joseph E. Stiglitz takes a hard look at the high cost of the Iraq War; Nobel Laureates Kenneth Arrow, Thomas Schelling, and Stiglitz provide insight and advice on global warming; Paul Krugman demystifies Social Security; Bradford DeLong presents divergent views on the coming dollar crisis; Diana Farrell reconsiders the impact of U.S. offshoring; Michael J. Boskin distinguishes what is "sense" and what is "nonsense" in discussions of federal deficits and debt; and Ronald I. McKinnon points out the consequences of the deindustrialization of America.

Additional essays question whether welfare reform was successful and explore the economic consequences of global warming and the rebuilding of New Orleans. They describe how a simple switch in auto insurance policy could benefit the environment; unravel the dangers of an unchecked housing bubble; and investigate the mishandling of the lending institutions Freddie Mac and Fannie Mae. Balancing empirical data with economic theory, The Economists' Voice proves that the unique perspective of the economist is a vital one for understanding today's world.

To learn more about the electronic journals published by The Berkeley Electronic Press, please visit http://www.bepress.com/ev.

This book demonstrates in a very accessible manner the application of economics to a variety of key public-policy issues. The essays are written by outstanding economists who are highly esteemed in the profession, and the choice of subjects is relevant and timely. Diane Coyle, author of The Soulful Science: What Economists Really Do and Why It Matters

A who's who of prominent economists assess today's big issues in this fascinating and readable book. Nobody who reads the op-ed page can afford to do without this. William Easterly, professor of economics, New York University, and author of The White Man's Burden: Why the West's Efforts to Aid the Rest Have Done So Much Ill and So Little Good

A genuinely useful contribution to knowledge and one that has life-changing implications for future generations. Irish Times

A useful and often stimulating introduction to the thinking of professional economists on the salient policy issues of recent times. Richard N. Cooper, Foreign Affairs

Joseph E. Stiglitz is a University Professor at Columbia University and former chief economist and senior vice president of the World Bank. Among his books are Escaping the Resource Curse and Globalization and Its Discontents, which has been translated into twenty-eight languages. In 2001, he was awarded the Nobel Prize in economics.Aaron S. Edlin is the Richard Jennings Professor at the University of California, Berkeley, and holds professorships in both economics and law. He is also a research associate at the National Bureau of Economic Research. Formerly, he was the senior economist covering regulation, antitrust, and industrial organization on the President's Council of Economic Advisors.

Bradford DeLong is a professor of economics at the University of California, Berkeley and a former deputy assistant secretary for economic policy in the United States Treasury. A popular economist blogger, he specializes in macroeconomic policy and economic history.