The Education of John Dewey 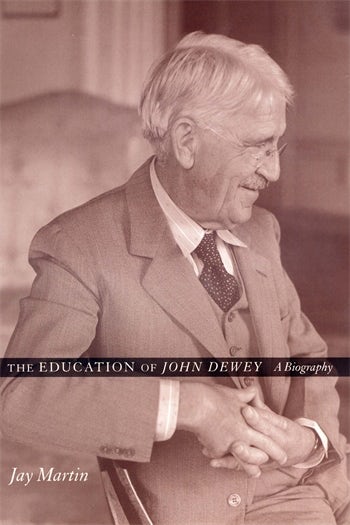 The Education of John Dewey

During John Dewey's lifetime (1859-1952), one public opinion poll after another revealed that he was esteemed to be one of the ten most important thinkers in American history. His body of thought, conventionally identified by the shorthand word "Pragmatism," has been the distinctive American philosophy of the last fifty years. His work on education is famous worldwide and is still influential today, anticipating as it did the ascendance in contemporary American pedagogy of multiculturalism and independent thinking. His University of Chicago Laboratory School (founded in 1896) thrives still and is a model for schools worldwide, especially in emerging democracies. But how was this lifetime of thought enmeshed in Dewey's emotional experience, in his joys and sorrows as son and brother, husband and father, and in his political activism and spirituality? Acclaimed biographer Jay Martin recaptures the unity of Dewey's life and work, tracing important themes through the philosopher's childhood years, family history, religious experience, and influential friendships.

Based on original sources, notably the vast collection of unpublished papers in the Center for Dewey Studies, this book tells the full story, for the first time, of the life and times of the eminent American philosopher, pragmatist, education reformer, and man of letters. In particular, The Education of John Dewey highlights the importance of the women in Dewey's life, especially his mother, wife, and daughters, but also others, including the reformer Jane Addams and the novelist Anzia Yezierska. A fitting tribute to a master thinker, Martin has rendered a tour de force portrait of a philosopher and social activist in full, seamlessly reintegrating Dewey's thought into both his personal life and the broader historical themes of his time.

This will be the new standard biography of the great reformer's life. Gilbert Taylor, Booklist

The major and minor facts of Dewey's long life... are engagingly presented. In addition, Martin has done a good job of researching some pertinent information about Dewey's life not found in the only other detailed biography.... Recommended. Library Journal

Martin's readable style and instinct for apt quotation—many new even to Dewey scholars—keeps his information flowing... The Education of John Dewey most pleases as an epic tale of an immortal multitasker, told with just the right mix of philosophical explanation, personal drama and historical context. Carlin Romano, Knight Ridder Newspapers

Martin [has] written [an] excellent new biography... [that] aims to represent Dewey as an individual who was a thinker and reformer of international public influence... Martin's book will interest anyone seeking a personal biography of Dewey... Highly recommended. Choice

Jay Martin has written and edited twenty-one books, including authoritative biographies of Nathanael West, Henry Miller and Conrad Aiken; the standard history of American literature 1865-1914; a key psychoanalytic work on "fictive personality"; and autobiographical novels about the U.S.S.R. and the time he spent as a Buddhist monk in China. Formerly Leo S. Bing Professor of English at the University of Southern California, he is currently Edward S. Gould Professor of Humanities, former director of the Gould Center for Humanistic Studies of the Modern World, professor of government, and founder of the Questions of Civilization Program at Claremont McKenna College. He lives in Claremont, CA.