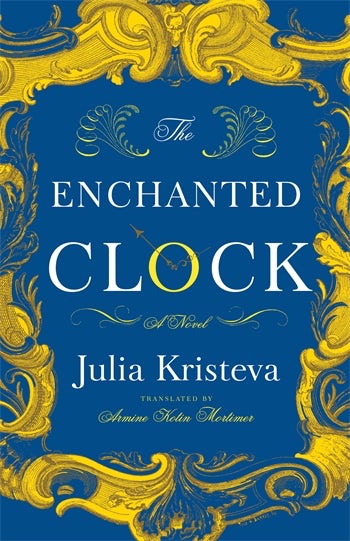 In the Palace of Versailles there is a fabulous golden clock, made for Louis XV by the king’s engineer, Claude-Siméon Passemant. The astronomical clock shows the phases of the moon and the movements of the planets, and it will tell time—hours, minutes, seconds, and even sixtieths of seconds—until the year 9999. Passemant’s clock brings the nature of time into sharp focus in Julia Kristeva’s intricate, poetic novel The Enchanted Clock.

Nivi Delisle, a psychoanalyst and magazine editor, nearly drowns while swimming off the Île de Ré; the astrophysicist Theo Passemant fishes her out of the water. They become lovers. While Theo wonders if he is descended from the clockmaker Passemant, Nivi’s son Stan, who suffers from occasional comas, develops a passion for the remarkable clock at Versailles. Soon Nivi is fixated on its maker. But then the clock is stolen, and when a young writer for Nivi’s magazine mysteriously dies, the clock is found near his body. The Enchanted Clock combines past and present, jumping back and forth between points of view and across eras from eighteenth-century Versailles to the present day. Its stylistically inventive narrative voices bring both immediacy and depth to our understanding of consciousness. Nivi’s life resembles her creator’s in many respects, coloring Kristeva’s customary erudition with autobiographical poignancy. Part detective mystery, part historical fiction, The Enchanted Clock is a philosophically and linguistically multifaceted novel, full of poetic ruminations on memory, love, and the transcendence of linear time. It is one of the most illuminating works of one of France’s great writers and thinkers.

Julia Kristeva’s L’horloge enchantée is a veritable tour de force, a brilliant piece of writing that infuses the novelistic genre with theatrical and essayistic undertones. Kristeva deftly weaves together multiple strands of a narrative that links a presently degraded state of France, Europe, and the world, in the grip of violence, fanaticism, rigid identity politics, anti-intellectualism, a general loss of quality of life, to the eve of revolution at the end of the eighteenth century. Verena Conley, Harvard University

An original, creative narrative on the topic of time, cognizant of a complex intellectual world while also telling a beautiful and compelling story. Carol Bové, Senior Lecturer in English, University of Pittsburgh and Professor Emerita of French, Westminster College

This translation of Julia Kristeva’s The Enchanted Clock is expertly done. It is an easy and pleasant read that captures the content, tone, and rhythm of the original. A fascinating novel by one of France’s most important intellectuals rendered into English by one of our best translators. Brian Reilly, Fordham University

Kristeva’s marvelously strange novel about a woman captivated by an eighteenth-century artifact reads like a philosophical treatise wrapped in a love story with a little mystery mixed in. Publishers Weekly

The Enchanted Clock is an elaborate . . . meditation on time. Times Literary Supplement

Julia Kristeva is professor emerita of linguistics at the Université de Paris VII and author of many acclaimed works and novels. Her Columbia University Press books include Murder in Byzantium: A Novel (2005); Teresa, My Love: An Imagined Life of the Saint of Avila (2014); and, with Philippe Sollers, Marriage as a Fine Art (2016).

Armine Kotin Mortimer is professor emerita of French literature at the University of Illinois at Urbana-Champaign. Her contributions to French culture were recognized with the Palmes académiques distinction in 2009. She is the translator of two books by Philippe Sollers.