The End of Progress 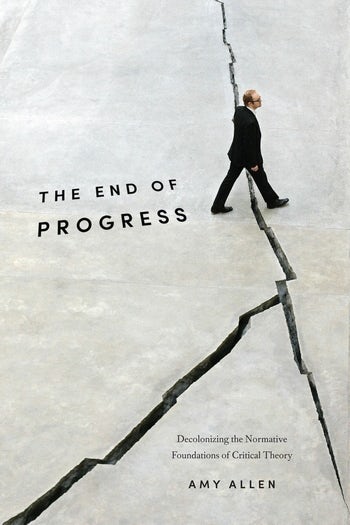 The End of Progress

While post- and decolonial theorists have thoroughly debunked the idea of historical progress as a Eurocentric, imperialist, and neocolonialist fallacy, many of the most prominent contemporary thinkers associated with the Frankfurt School—Jürgen Habermas, Axel Honneth, and Rainer Forst—have defended ideas of progress, development, and modernity and have even made such ideas central to their normative claims. Can the Frankfurt School's goal of radical social change survive this critique? And what would a decolonized critical theory look like?

Amy Allen fractures critical theory from within by dispensing with its progressive reading of history while retaining its notion of progress as a political imperative, so eloquently defended by Adorno. Critical theory, according to Allen, is the best resource we have for achieving emancipatory social goals. In reimagining a decolonized critical theory after the end of progress, she rescues it from oblivion and gives it a future.

Amy Allen has performed the long-overdue task of pulling contemporary Frankfurt School theory into the light that postcolonial theory sheds upon its quietude about imperialism and colonialism, its insufficient appreciation of global inequality and differences, and its fetishism and purification of European modernity. While honoring the power of the School's theoretical foundations and insights, she stages a steady and profound encounter with its worldly Others—an encounter that cannot be dismissed. Wendy Brown, University of California, Berkeley

In this courageous and path-breaking text, Allen challenges critical theory to live up to its own pretensions and begin to decolonize itself, starting with its still insufficiently interrogated foundational Euro-progressivist assumptions. Charles Mills, Northwestern University

The End of Progress is a beautifully written and engaging critique of critical theory. It challenges basic assumptions of the Frankfurt School to expand our field of view and builds bridges with other genres of critical thinking. This book charts a bold direction that breathes new life into critical theory. Kevin Olson, University of California, Irvine

In this engaging, perceptive, and illuminating book, Amy Allen seeks to decolonize Critical Theory. Exposing weaknesses in the normative claims of Habermas, Honneth, and Forst and with a fresh interpretation of Adorno and Foucault, this book is stimulating and provocative for anyone interested in both the limitations and prospects of Critical Theory. Richard J. Bernstein, New School for Social Research

I highly recommend this outstanding internal critique of the idea of universal, developmental progress in the critical theory tradition and its role in legitimating Western imperialism by a leading critical theorist. Allen also initiates a promising dialogue with postcolonial theorists who have advanced external critiques, a dialogue oriented to decolonizing normative political theory together. James Tully, University of Victoria

In her perspicacious and penetrating discussion of major figures of the Frankfurt School, Allen shows how deeply the tradition of critique is entangled with the grand narrative of enlightenment, the myth of the progressive unfolding of reason. Drawing on Adorno and Foucault, she shows the path contemporary critique has to take: the path to radical self-critique. Christoph Menke, Goethe-Universität Frankfurt

A major contribution to the decolonization of Frankfurt School critical theory. Theory & Event

Preface and Acknowledgments
List of Abbreviations
1. Critical Theory and the Idea of Progress
2. From Social Evolution to Multiple Modernities: History and Normativity in Habermas
3. The Ineliminability of Progress? Honneth's Hegelian Contextualism
4. From Hegelian Reconstructivism to Kantian Constructivism: Forst's Theory of Justification
5. From the Dialectic of Enlightenment to the History of Madness: Foucault as Adorno's Other Other Son
6. Conclusion: "Truth," Reason, and History
Notes
Bibliography
Index

Amy Allen is Liberal Arts Professor of Philosophy and head of the Department of Philosophy at Pennsylvania State University. She is the editor of the Columbia University Press series New Directions in Critical Theory.