The Evolution of the Global Terrorist Threat 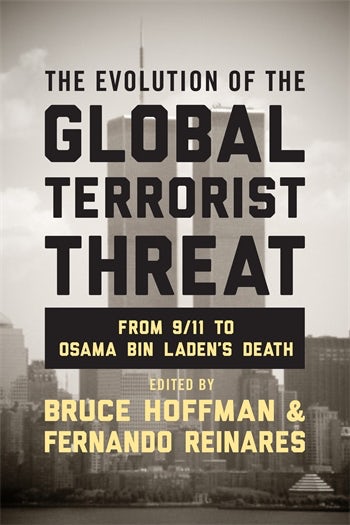 The Evolution of the Global Terrorist Threat

Examining major terrorist acts and campaigns undertaken in the decade following September 11, 2001, internationally recognized scholars study the involvement of global terrorist leaders and organizations in these incidents and the planning, organization, execution, recruitment, and training that went into them. Their work captures the changing character of al-Qaeda and its affiliates since the invasions of Afghanistan and Iraq and the sophisticated elements that, despite the West's best counterterrorism efforts, continue to exert substantial direction over jihadist terrorist operations.

Through case studies of terrorist acts and offensives occurring both in and outside the West, the volume's contributors investigate al-Qaeda and other related entities as they adapted to the strategies of Operation Enduring Freedom and subsequent U.S.-led global counterterrorism programs. They explore whether Osama bin Laden was indeed reduced to a mere figurehead before his death or continued to influence al-Qaeda's global activities. Did al-Qaeda become a loose collection of individuals and ideas following its expulsion from Afghanistan, or was it reborn as a transnational terrorist structure powered by a well-articulated ideology? What is the preeminent terrorist threat we face today, and what will it look like in the future? This anthology pinpoints the critical patterns and strategies that will inform counterterrorism in the coming decades.

The Evolution of the Global Terrorist Threat offers the definitive account of al-Qaeda's plots in the post-9/11 era. Bruce Hoffman, Fernando Reinares, and the volume's other noted experts provide detailed analyses of al-Qaeda-linked plots around the world, making a compelling case that the al-Qaeda core remains an active terrorism threat to governments everywhere. Daniel Byman, Georgetown University, and senior fellow, Brookings Institution

Compelling and important. Essential reading for anyone wanting to understand al-Qaeda or international terrorism. Richard English, director, Handa Centre for the Study of Terrorism and Political Violence, University of St. Andrews

Leading authorities on terrorism ably dissect the exact scope and nature of the threat posed by al-Qaeda and allied groups in the decade after 9/11 in a work that is both comprehensive and authoritative. Peter Bergen, author of Manhunt: The Ten Year Search for Bin Laden from 9/11 to Abbottabad

A useful starting point for readers who wish to understand how to unravel and defuse terrorist threats. Kirkus Reviews

A seminal body of work and very strongly recommended for both community and academic library reference collections, as well as the supplement reading lists for non-specialist general readers with an interest in the 20th Century history and development of Islamic militant and terrorist organizations. Midwest Book Review

One of the most intensive studies focused on world terrorism in the decade following 9/11. 15 Minutes Magazine

This volume belongs in every reader's terrorism library. CHOICE

Will stand as one of the most important documents of one of the most turbulent decades in modern history. It is an instant classic that no serious scholar of terrorism and political violence can afford to ignore. Assaf Moghadam, Democracy and Security

An excellent single-volume source on the rise, activities, and possible decline of Al Qaeda.... It is a worthy addition to the shelves of any reader interested in terrorism, Al Qaeda, and global efforts to counter radical, violent ideology. Paul Springer, H-War

Introduction, by Bruce Hoffman and Fernando Reinares
Part I. In the West
1. The Evolution of the Post-9/11 Threat to the U.S. Homeland, by Lorenzo Vidino
2. The 2004 Madrid Train Bombings, by Fernando Reinares
3. Operation Crevice in London, by Peter R. Neumann and Ryan Evans
4. Dhiren Barot and Operation Rhyme, by Lindsay Clutterbuck
5. The Van Gogh Murder and Beyond, by Beatrice de Graaf
6. Leadership and the Toronto 18, by Stewart Bell
7. Operation Pendennis in Australia, by Sally Neighbour
8. The 7 July 2005 London Bombings, by Bruce Hoffman
9. The 2006 Airline Plot, by Paul Cruickshank
10. The Foiled Attacks in Italy in 2006, by Javier Jordán
11. The German "Sauerland" Plot, Central Asia, and Turkey, by Guido Steinberg
12. The Danish Glasvej Case, by Michael Taarnby
13. The January 2008 Suicide Bomb Plot in Barcelona, by Fernando Reinares
14. Ansar al-Fatah and "Iraqi" Networks in France, by Jean-Pierre Filiu
Part II. Outside the West
15. Al-Qaeda Terrorism in Afghanistan, by Seth G. Jones
16. Attacks of al-Jemaah al-Islamiyah in Southeast Asia, by Rohan Gunaratna
17. The Mombassa Attacks of November 28, 2002, by Jonathan Fighel
18. The Origins of Sectarian Terrorism in Iraq, by Mohammed M. Hafez
19. The November 2003 Istanbul Bombings, by Guido Steinberg and Philipp Holtmann
20. The Sinai Terrorist Attacks, by Holly L. McCarthy and Ami Pedahzur
21. Comparing the 2003 and 2007 Incidents in Casablanca, by Jack Kalpakian
22. The 2007 Suicide Attacks in Algiers, by Anneli Botha
23. The 2003 Riyadh and 2008 Sanaa Bombings, by Thomas Hegghammer
24. The 2008 Mumbai Attack, by C. Christine Fair
25. The 2010 Suicide Attacks in Kampala, by Anneli Botha
Conclusion, by Bruce Hoffman and Fernando Reinares
List of Contributors
Index

Bruce Hoffman is a professor at Georgetown University's Walsh School of Foreign Service and the director of its Center for Security Studies and its Security Studies Program, as well as a senior fellow at the U.S. Military Academy's Combating Terrorism Center. He is also the author of Inside Terrorism (Columbia, 1998), now in its third edition.

Fernando Reinares is a professor of political science and security studies at Universidad Rey Juan Carlos and a director of the Program on Global Terrorism at Elcano Royal Institute in Madrid, Spain. He is also an adjunct professor at Georgetown University and the author of Al-Qaeda's Revenge: The 2004 Madrid Train Bombings (Columbia, 2016).