The Experience of Injustice

A Theory of Recognition 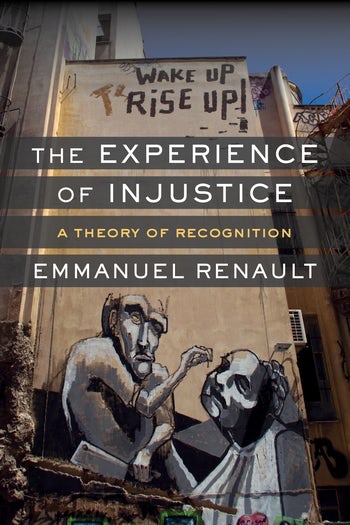 The Experience of Injustice

A Theory of Recognition

In The Experience of Injustice, the French philosopher Emmanuel Renault opens an important new chapter in critical theory. He brings together political theory, critical social science, and a keen sense of the power of popular movements to offer a forceful vision of social justice. Questioning normative political philosophy’s conception of justice, Renault gives an account of injustice as the denial of recognition, placing the experience of social suffering at the heart of contemporary critical theory.

Inspired by Axel Honneth, Renault argues that a radicalized version of Honneth’s ethics of recognition can provide a systematic alternative to the liberal-democratic projects of such thinkers as Rawls and Habermas. Renault reformulates Honneth’s theory as a framework founded on experiences of injustice. He develops a complex, psychoanalytically rich account of suffering, disaffiliation, and identity loss to explain these experiences as denials of recognition, linking everyday injustice to a robust defense of the politicization of identity in social struggles. Engaging contemporary French and German critical theory alongside interdisciplinary tools from sociology, psychoanalysis, socialist political theory, social-movement theory, and philosophy, Renault articulates the importance of a theory of recognition for the resurgence of social critique.

For everyone who rightly assumes that social critique has to start from a diagnosis of what is in society experienced as an injustice or as a form of disrespect, this book is both a rich compendium and a theoretical guideline. Emmanuel Renault has done a magnificent job in outlining the empirical and philosophical contours of a critical theory based on a theory of recognition. Axel Honneth, author of Freedom's Right: The Social Foundations of Democratic Life

Taking its theoretical problems and political orientation from contemporary experiences of injustice—the social and psychic sufferings of the dispossessed and deprived, the excluded and marginalized, the stigmatized, the invisible, the devalued—Renault's book proposes a major reconception of the theory of justice. Renault incisively organizes critical social theory, sociology, and psychoanalysis around a theory of the denial of recognition in its manifold forms, boldly calling for political philosophy to take sides and become a spokesperson against injustice. Christopher F. Zurn, author of Axel Honneth

The Experience of Injustice is a major intervention into the field of critical political and social theory, pushing theories of justice and recognition to be more social, political, and activist. It will be heralded as a leading contribution to the field. James Ingram, author of Radical Cosmopolitics

Emmanuel Renault is professor of philosophy at University of Paris-Nanterre. His books in English include Social Suffering: Sociology, Psychology, Politics (2017) and The Return of Work in Critical Theory: Self, Society, Politics (Columbia, 2018).

Richard A. Lynch is author of Foucault’s Critical Ethics (2016) and translator of Isabelle Thomas-Fogiel’s The Death of Philosophy: Reference and Self-Reference in Contemporary Thought (Columbia, 2011).