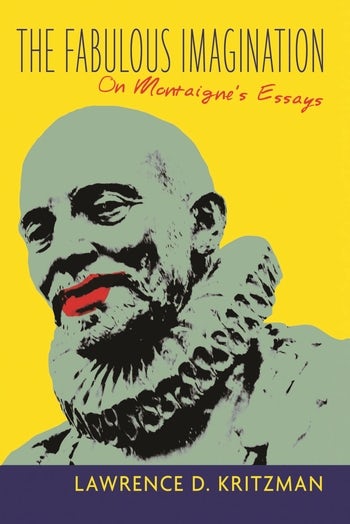 "This is one of the few books on Montaigne that fuses analytical skill with humane awareness of why Montaigne matters."Harold Bloom, Sterling Professor of Humanities, Yale University

"In this exhilarating and learned book on Montaigne's essays, Lawrence D. Kritzman contemporizes the great writer. Reading him from today's deconstructive America, Kritzman discovers Montaigne always already deep into a dialogue with Jacques Derrida and psychoanalysis. One cannot but admire this fabulous act of translation."Hélène Cixous

"Throughout his career, Lawrence D. Kritzman has demonstrated an intimate knowledge of Montaigne's essays and an engagement with French philosophy and critical theory. The Fabulous Imagination sheds precious new light on one of the founders of modern individualism and on his crucial quest for self-knowledge."Jean Starobinski, professor emeritus of French literature, University of Geneva

Michel de Montaigne's (1533-1592) Essais was a profound study of human subjectivity. More than three hundred years before the advent of psychoanalysis, Montaigne embarked on a remarkable quest to see and imagine the self from a variety of vantages. Through the questions How shall I live? How can I know myself? he explored the significance of monsters, nightmares, and traumatic memories; the fear of impotence; the fragility of gender; and the act of anticipating and coping with death. In this book, Lawrence D. Kritzman traces Montaigne's development of the Western concept of the self. For Montaigne, imagination lies at the core of an internal universe that influences both the body and the mind. Imagination is essential to human experience. Although Montaigne recognized that the imagination can confuse the individual, "the fabulous imagination" can be curative, enabling the mind's "I" to sustain itself in the face of hardship.

Kritzman begins with Montaigne's study of the fragility of gender and its relationship to the peripatetic movement of a fabulous imagination. He then follows with the essayist's examination of the act of mourning and the power of the imagination to overcome the fear of death. Kritzman concludes with Montaigne's views on philosophy, experience, and the connection between self-portraiture, ethics, and oblivion. His reading demonstrates that the mind's I, as Montaigne envisioned it, sees by imagining that which is not visible, thus offering an alternative to the logical positivism of our age.

In this exhilarating and learned book on Montaigne's essays, Lawrence D. Kritzman contemporizes the great writer. Reading him from today's deconstructive America, Kritzman discovers Montaigne always already deep into a dialogue with Jacques Derrida and psychoanalysis. One cannot but admire this fabulous act of translation. Hélène Cixous, author of White Ink: Interviews on Sex, Text, and Politics

Throughout his career, Lawrence D. Kritzman has demonstrated an intimate knowledge of Montaigne's essays and an engagement with French philosophy and critical theory. The Fabulous Imagination sheds precious new light on one of the founders of modern individualism and on his crucial quest for self-knowledge. Jean Starobinski, professor emeritus of French literature, University of Geneva

Lawrence D. Kritzman is centered on the way Montaigne's essays are self-contained expositions of ambivalence and unresolved tension about the difficulties of living, negotiating, and being in the world. He brings us back to archaic but vital issues that haunt us: to monsters and nightmares; to fear of impotence; to thoughts about the end of filial lines; to the ways that writing exhumes and thus copes with traumatic memories; to mimicry not as a way of representing the world but as a tactic of diverting, deflecting, and ultimately assuaging its violence. A strong and enduring contribution not only to early modern study but also to the importance of theory insofar as it can be displaced into and out of the works of canonical authors. Tom Conley, Abbott Lawrence Lowell Professor of Romance Languages and Literatures, Harvard University

Kritzman, whose scholarship and erudition are apparent on every page, skillfully analyzes Montaigne's response to each of these traumas.... Highly recommended. Choice

Although other books will help modern readers understand Montaigne's place in the intellectual context of the sixteenth century, Kritzman's study achieves something rare in showing how Montaigne's imagination allowed him to confront the reality of his own everyday life. In this way, the Fabulous Imagination proves itself a historical text, but one that filters historical consciousness through a modern and personal prism. A unique mix of the personal, the historical, and the theoretical, the Fabulous Imagination brings Montaigne's Essays into focus as only a highly sensitive author with an extensive knowledge of both history and theory can. Michael Randall, Substance

Essential reading for any student or scholar of Montaigne's essays. Lawrence D. Kritzman... consistently balances a profound understanding of Montaigne's essays with a broad and diverse knowledge of postmodern theory, in the process offering illuminating readings of these texts. Kathleen Long, The Comparatist

The book offers a summary of the work of a major scholar of French Renaissance studies, and hence a showcase of the reading practices that marked the era in which this work first became prominent. Hassan Melehy, H-France

Lawrence D. Kritzman is John D. Willard Professor of French, ComparativeLiterature, and Oratory at Dartmouth. He has been visiting professor at Harvard, Stanford, and the Ecole des Hautes Etudes (Paris) and is the author of several books on the French Renaissance. He is also editor of the Columbia History of Twentieth-Century French Thought and the Columbia University Press series European Perspectives.