The Force of the Example

Explorations in the Paradigm of Judgment 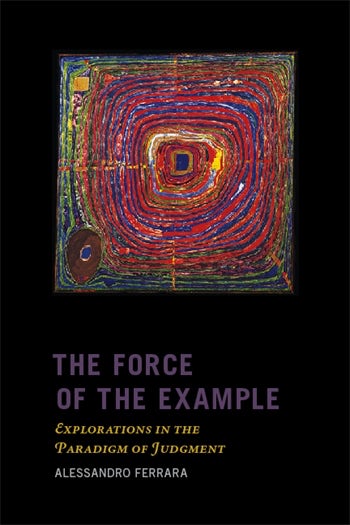 The Force of the Example

Explorations in the Paradigm of Judgment

During the twentieth century, the view that assertions and norms are valid insofar as they respond to principles independent of all local and temporal contexts came under attack from two perspectives: the partiality of translation and the intersubjective constitution of the self, understood as responsive to recognition. Defenses of universalism have by and large taken the form of a thinning out of substantive universalism into various forms of proceduralism.

Alessandro Ferrara instead launches an entirely different strategy for transcending the particularity of context without contradicting our pluralistic intuitions: a strategy centered on the exemplary universalism of judgment. Whereas exemplarity has long been thought to belong to the domain of aesthetics, this book explores the other uses to which it can be put in our philosophical predicament, especially in the field of politics. After defining exemplarity and describing how something unique can possess universal significance, Ferrara addresses the force exerted by exemplarity, the nature of the judgment that discloses exemplarity, and the way in which the force of the example can bridge the difference between various contexts.

Drawing not only on Kant's Critique of the Power of Judgment but also on the work of Hannah Arendt, John Rawls, Ronald Dworkin, and Jürgen Habermas, Ferrara outlines a view of exemplary validity that is applicable to today's central philosophical issues, including public reason, human rights, radical evil, sovereignty, republicanism and liberalism, and religion in the public sphere.
Preface
Introduction
1. Judgment as a Paradigm
2. Making Sense of the Exemplary
3. The Exemplary and the Public Realm: Reconstructing the Normativity of the Reasonable
4. Exemplifying the Worst: Facing up to Radical Evil
5. Political Republicanism and the Force of the Example
6. Exemplarity and Human Rights
7. Enforcing Human Rights Between Westphalia and Cosmopolis
8. Europe as a Special Area for Human Hope
9. Religion Within the Limits of Reasonableness
Notes
Index

Alessandro Ferrara, professor of philosophy at the University of Rome "Tor Vergata" and member of the advisory board for the series New Directions in Critical Theory, is the author of Modernity and Authenticity: A Study of the Social and Ethical Thought of Jean-Jacques Rousseau, Reflective Authenticity: Rethinking the Project of Modernity, and Justice and Judgment: The Rise and the Prospect of the Judgment Model in Contemporary Political Philosophy.