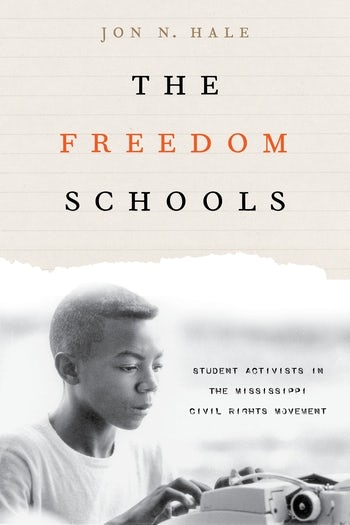 Created in 1964 as part of the Mississippi Freedom Summer, the Mississippi Freedom Schools were launched by educators and activists to provide an alternative education for African American students that would facilitate student activism and participatory democracy. The schools, as Jon N. Hale demonstrates, had a crucial role in the civil rights movement and a major impact on the development of progressive education throughout the nation. Designed and run by African American and white educators and activists, the Freedom Schools counteracted segregationist policies that inhibited opportunities for black youth. Providing high-quality, progressive education that addressed issues of social justice, the schools prepared African American students to fight for freedom on all fronts. Forming a political network, the Freedom Schools taught students how, when, and where to engage politically, shaping activists who trained others to challenge inequality.

Based on dozens of first-time interviews with former Freedom School students and teachers and on rich archival materials, this remarkable social history of the Mississippi Freedom Schools is told from the perspective of those frequently left out of civil rights narratives that focus on national leadership or college protestors. Hale reveals the role that school-age students played in the civil rights movement and the crucial contribution made by grassroots activists on the local level. He also examines the challenges confronted by Freedom School activists and teachers, such as intimidation by racist Mississippians and race relations between blacks and whites within the schools. In tracing the stories of Freedom School students into adulthood, this book reveals the ways in which these individuals turned training into decades of activism. Former students and teachers speak eloquently about the principles that informed their practice and the influence that the Freedom School curriculum has had on education. They also offer key strategies for further integrating the American school system and politically engaging today's youth.

Jon N. Hale's work hits the mark! It is accurate and timely in refocusing our attention on the profound power of African American youth and education. The activists and young learners who made the Freedom Schools possible have greatly gone unsung. In the midst of imminent danger, they learned and experienced democracy while illustrating the efficacy of community participation in education. Hale rightly places them at the forefront of the struggle for freedom. His book reminds us of those who saved the nation's soul. Stefan M. Bradley, author of Harlem vs. Columbia University: Black Student Power in the Late 1960s

Hale's groundbreaking examination of the Student Nonviolent Coordinating Committee's tireless efforts to provide free educational opportunities for Mississippi's African American children is an often overlooked yet instrumental component of the Mississippi Freedom Summer. The Freedom Schools offers a greater understanding of the schools' lasting legacy and the profound impact of the Freedom Schools on Mississippi's black students as they later engaged in boycotts and school walkouts, influencing public school desegregation efforts and the civil rights movement. Sonya Ramsey, author of Reading, Writing, and Segregation: A Century of Black Women Teachers in Nashville

Hale's impressive study will make a major contribution to civil rights historiography. It provides a very realistic view of Freedom Schools with great detail and precision and astutely illustrates the significant role of education in the civil rights movement. Derrick Alridge, University of Virginia

The narrative reads smoothly and leaves the reader with a greater sense of the hopes, desires, and goals of the [Mississippi Civil Rights] movement. CounterPunch

The Freedom Schools adds depth and complexity to our emerging understanding of the civil rights movement. It should appeal especially to those interested in the intersection of education and social change. American Historical Review

Hale’s important study impresses because of its meticulous research, insightful analysis, and cogent argument... His work adds yet another important piece to the complex puzzle of the civil rights movement and will be of value to scholars and educators. Simon Wendt, University of Frankfurt, Journal of American History

Present-day teachers and students reading Hale’s book might find themselves invigorated by this history of the Freedom Schools. Perhaps its lessons can inspire renewed questioning about the meaning of citizenship and democracy today. Susan Eckelmann Berghel, University of Tennessee–Chattanooga, Journal of the History of Childhood and Youth

Apart from its subject matter and its analytical contributions, The Freedom Schools exemplifies the power of community studies and oral histories. History of Education

Make[s] invaluable contributions to our understanding of the relationship between education and the Mississippi freedom struggle, and as such should have broad appeal to scholars focused on education, civil rights, African American history, childhood, and/or Southern history . . . While not flinching away from failures and setbacks, Hale [reminds] us that transformative change is possible, even in the face of overwhelming odds. Reviews in American History

Read the introduction to THE FREE SCHOOLS: STUDENT ACTIVIST IN THE MISSISSIPPI CIVIL RIGHTS MOVEMENT, by Jon N. Hale. In this work, Hale weaves a social history of the Mississippi Freedom Schools from the perspective of former students and teachers. Having turned their training into decades of activism, they speak on their locally organized, widely transmitted curriculum and offer key strategies for integrating the school system and politically engaging today’s youth.

Jon N. Hale is associate professor of educational history in the Department of Educational Studies at the University of South Carolina. He is a coauthor of To Write in the Light of Freedom: The Newspapers of the 1964 Mississippi Freedom Schools (2015).