The Future of Catholicism in America 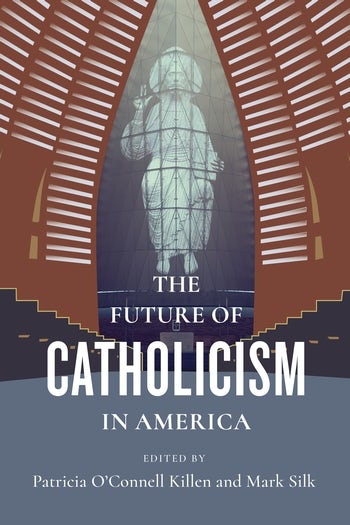 The Future of Catholicism in America

Catholics constitute the largest religious community in the United States. Yet most American Catholics have never known a time when their church was not embroiled in controversies over liturgy, religious authority, cultural change, and gender and sexuality. Today, these arguments are taking place against the backdrop of Pope Francis’s progressive agenda and the resurgence of the clergy sexual abuse crisis. What is the future of Catholicism in America?

This volume considers the prospects at a pivotal moment. Contributors—scholars from sociology, theology, religious studies, and history—look at the church’s evolving institutional structure, its increasing ethnic diversity, and its changing public presence. They explore the tensions among members of the hierarchy, between clergy and laity, and along lines of ethnicity, immigration status, class, generation, political affiliation, and degree of religious commitment. They conclude that American Catholicism’s future will be pluriform—reflecting the variety of cultural, political, ideological, and spiritual points of view that typify the multicultural, democratic society of which Catholics constitute so large a part.

The book provides an excellent and also sobering view of Catholicism in America and its future. Sociology of Religion

For anyone in the field of Religions in America, including new religions studies, this is a must read. Nova Religio

In the past fifty years Catholicism has undergone a series of twists and turns. This sensitive and clear-eyed analysis looks to the past as well as the present to anticipate the future of a constantly changing religion. The authors peel away the multiple layers that make up the contemporary church with thoroughness and honesty. While unsettling, this is a mandatory read.

This volume offers indispensable resources for re-imagining a post-subcultural future for Catholics and their political and religious presence in the voluntary and diverse religious culture of the United States.

Well-conceived. This is a must-read. Nova Religio

Series Editors’ Introduction: The Future of Religion in America, by Mark Silk and Andrew H. Walsh
Introduction: The Future of Roman Catholicism in the United States: Beyond the Subculture, by Patricia O’Connell Killen
1. Catholicism Today: Adrift and/or Adjusting, by William D. Dinges
2. Becoming Latino: The Transformation of U.S. Catholicism, by Timothy Matovina
3. Since Vatican II: American Catholicism in Transition, by Steven M. Avella
4. Who Pastors: The Priest, the Context, and the Ministry, by Katarina Schuth
5. A Pluriform Unity: A Historian’s View of the Contemporary Church, by Joseph P. Chinnici
6. Catholic Worship in a Contentious Age, by Andrew H. Walsh
7. Public Catholicism: Contemporary Presence and Future Promise, by Richard L. Wood
Conclusion: The Shape of the American Catholic Future, by Patricia O’Connell Killen
List of Contributors
Index

Patricia O’Connell Killen is professor of religious studies at Gonzaga University. Her books include The Art of Theological Reflection (1994) and Religion and Public Life in the Pacific Northwest: The None Zone (2004).

Mark Silk is professor of religion in public life and director of the Leonard Greenberg Center for the Study of Religion in Public Life at Trinity College. He is the author of Unsecular Media: Making News of Religion in America (1995) and coeditor of Religion by Region, an eight-volume series on religion and public life in the United States, among others.