The Future of Us

What the Dreams of Children Mean for Twenty-First-Century America 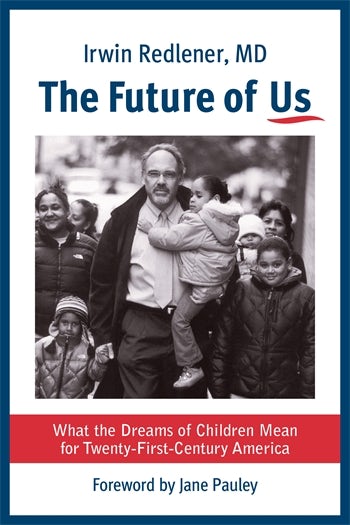 The Future of Us

What the Dreams of Children Mean for Twenty-First-Century America

Raymond is a talented young artist who carries his work from homeless shelter to homeless shelter in a tattered bag but has never even been inside a museum. He is emblematic of the children that the renowned pediatrician and children’s advocate Irwin Redlener has met over the course of his long and colorful career. Inadequate education, barriers to health care, and crushing poverty make it overwhelmingly difficult for many children to realize their dreams. In this memoir, Redlener draws on poignant personal experiences to investigate the nation’s healthcare safety net and special programs that are designed to protect and nurture our most vulnerable kids, but that too often fail to do so.

The book follows Redlener’s winding career, from his work as a pediatrician in the Arkansas delta, to treating child abuse in a Miami hospital, to helping children in the aftermath of 9/11 and Hurricane Katrina. The reader accompanies him to the board of USA for Africa, to cofounding the Children’s Health Fund with Paul Simon, as he persuades Joan Baez to play a benefit concert for his clinic in rural Arkansas, and to dinner with Fidel Castro. But what has motivated him most powerfully are the children who struggle with terrible adversities yet dream of becoming paleontologists, artists, and marine biologists. These stories are his springboard for discussing larger policy issues that hinder us from effectively eradicating childhood poverty and overcoming barriers to accessible health care. Persistent deprivation and the avoidable problems that accompany poverty ensnare millions of children, with rippling effects that harm the health, prosperity, and creativity of the adults they become. Redlener argues that we must drastically change our approach to meeting the needs of children—for their sake and to ensure America’s resiliency and influence in an increasingly complex and challenging world.

As cofounder with Dr. Redlener of Children’s Health Fund, I have watched him grapple for more than thirty years with the problem of inadequate health care for our poor and working-class children. In clear, often emotional language, Redlener lays out the costs borne by children and our society of failing to resolve these health access issues. Still an optimistic realist, he offers solutions in The Future of Us that are both feasible and affordable. Paul Simon

The Future of Us will inform you, fascinate you, and most of all, inspire you. Join Dr. Irwin Redlener, America’s leading advocate for children’s health, as he makes his life journey from rural America to medical school in Europe and the U.S., to treating America’s poor children in the South during the civil rights era to his remarkable creativity and national leadership in founding and leading the Children’s Health Fund and the Children’s Hospital in New York City. Irwin and his partner and wife Karen have improved the health and life prospects of millions upon millions of children, but Redlener never flags in his efforts to do more, and to remind us—with great urgency and eloquence—how much better we can and must do for America’s and the world’s poor and vulnerable children. Jeffrey D. Sachs, University Professor of Sustainable Development, Columbia University

In this incredibly personal and readable story of the activist pediatrician who created the big blue bus and brought comprehensive medical care to underserved, at-risk children all over the United States, Redlener argues that by eradicating our differences of opportunity, we can increase the well-being, prosperity, and potential of all Americans. Read this, and become inspired yourself! Julianne Moore

This is the book our troubled era has been waiting for. In his beautifully written, fearless exploration of the lives of vulnerable children, Dr. Redlener offers us profound insights into ourselves and our society. The Future of Us is not just wise and wonderful, it’s essential for everyone who cares about the well-being of our children and the nation as a whole. Bob Herbert, Distinguished Senior Fellow at Demos and former columnist for the New York Times

The world needs to listen to the message of the amazing Irwin Redlener—that every child, no matter where and whom they are born to, deserves a chance in life. It truly is “the future of us.” Carolyn Miles, president and CEO, Save the Children

In an engaging and heartfelt manner, The Future of Us provides snapshots of the appalling conditions facing children living in poverty in America, and then presents much-needed practical solutions to help them. I highly recommend it. Dan Klores, Peabody Award–winning filmmaker

Excellently done, and will be an inspiration to those who read it. It particularly addresses the need to form collaborations with others involved in caring for children in their communities. I cannot name another individual who could have written this book, considering Redlener's vast experience. Michael Kappy, University of Colorado School of Medicine

A must-read for anyone who loves and cares about children and our future. Utica Dispatch

Ultimately, The Future of Us isn't a memoir about Redlener but a tale told to inspire others to engage in issues, to show them that politics and policy isn't some airy thing divorced from their experience. Misanthropester

An extraordinary read from cover to cover, The Future of Us is one of those compelling personal stories that will linger in the mind and memory of the reader long after the book itself as been finished. Midwest Book Review

Hard-hitting and personal, The Future of Us makes an impassioned plea for change based not only on study but on personal experience, arguing that America needs to drastically change its viewpoints and attitudes towards social programs and helping kids. Donovans Bookshelf

A deeply moving memoir and call to action. San Francisco Review of Books

Irwin Redlener is president emeritus and cofounder of Children’s Health Fund and director of the National Center for Disaster Preparedness and the Program on Child Well-Being and Resilience at Columbia University’s Earth Institute. He is also a professor at the Mailman School of Public Health and the Vagelos College of Physicians and Surgeons at Columbia University.

Jane Pauley is a television journalist and author. She is the anchor of CBS Sunday Morning and was previously cohost of Dateline NBC and NBC's Today.