Inequalities and Miracles on the U.S.-Mexico Border 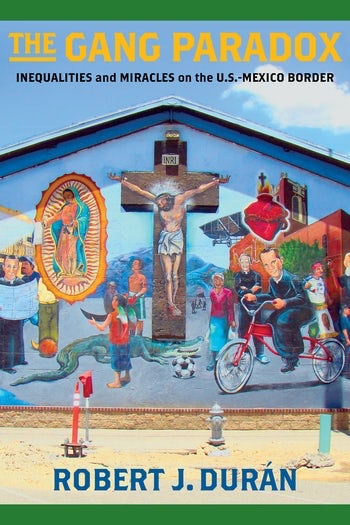 Inequalities and Miracles on the U.S.-Mexico Border

The areas along the U.S.-Mexico border are commonly portrayed as a hot spot for gang activity, drug trafficking, and violence. Yet when Robert J. Durán conducted almost a decade’s worth of ethnographic research in border towns between El Paso, Texas, and southern New Mexico—a region notorious for gang activity, according to federal officials—he found significantly less gang membership and activity than common fearmongering claims would have us believe. Instead, he witnessed how the gang label was used to criminalize youth of Mexican descent—to justify the overrepresentation of Latinos in the justice system, the implementation of punitive practices in the school system, and the request for additional resources by law enforcement.

In The Gang Paradox, Durán analyzes the impact of deportation, incarceration, and racialized perceptions of criminality on Latino families and youth along the border. He draws on ethnography, archival research, official data sources, and interviews with practitioners and community members to present a compelling portrait of Latino residents’ struggles amid deep structural disadvantages. Durán, himself a former gang member, offers keen insights into youth experience with schools, juvenile probation, and law enforcement. The Gang Paradox is a powerful community study that sheds new light on intertwined criminalization and racialization, with policy relevance toward issues of gangs, juvenile delinquency, and the lack of resources in border regions.

The Gang Paradox tells a story about the Mexican American experience on the border, including gangs and institutional reactions to them. In clear, descriptive, and refreshingly reflexive language Durán argues that the reality of gangs is far from its media image, and provides ample data to make his point. This book is educational in the best sense and should be welcomed. John Hagedorn, University of Illinois at Chicago, author of A World of Gangs: Armed Young Men and Gangsta Culture

Anchored in a critical revisionist history of the Southwest borderlands and the social construction of 'the Hispanic gang,' The Gang Paradox offers a multidisciplinary analysis of the origins, composition, and cultural significance of gangs as a site of group identity. Drawing upon theories of racial formation, settler colonialism, applied ethnography, criminology, and personal knowledge as a former gang member, sociologist Robert J. Durán pushes back against the dominant claims that gang members are criminals, and that gangs embody dysfunction. Rather, Durán situates gangs as social identities within a complex matrix of racial oppression, militarization, and social justice activism in the U.S.–Mexico borderlands. This theoretically rich and methodologically sophisticated book will change the way we think about gangs in the modern era. Cynthia Bejarano, New Mexico State University, author of ¿Qué Onda? Urban Youth Culture and Border Identity

The Gang Paradox delivers keen insight on Mexican-origin crime and contradicts fearmongering claims regarding border violence. In it, he draws from his decade-long ethnographic research to draw out the complex relationship among crime, gang activity, ethnicity, and inequality on the U.S.-Mexico border. This revealing and highly engaging tome provides penetrating insight on gang activity, making sense of seemingly contradictory historical trends and cross-city comparisons, while painstakingly placing his investigation in the intersections of race, class and gender. More than just a strong read, this book sets an agenda for the next generation on how, and why, border residents have lower rates of violence and gang membership than urban residents in many locations across the nation. The Gang Paradox is a critical and well-timed research asset. Ramiro Martinez Jr., author of Latino Homicide: Immigration, Violence, and Community and coeditor of Punishing Immigrants

Takes a social justice, social activist approach, using narrative and dispelling many myths about gang violence spilling over the border...[this] book is approachable and doesn't simply offer doom and gloom: he also offers glimmers of hope for at-risk youth. Choice

List of Illustrations
Acknowledgments
Introduction
Part I: A Revisionist History
1. The Context for the Origination of Gangs: Double Colonization
2. The Formation of Gangs in El Chuco
3. Moral Panic Under a Research Microscope: The Organizational Scene Prior to Arrival
Part II: An Ethnographic Foundation
4. How Youth of Mexican Descent Encounter Criminalization
5. Contradictions in Law Enforcement
6. Participatory Action Research Teams at a Minority-Serving Institution
7. Empirical Miracles and Where Do We Go from Here?
Conclusion
Appendix 1: Methods
Appendix 2: Development of Gangs Timeline in the New Mexico/Texas Region
Notes
References
Index

Read the introduction to THE GANG PARADOX: INEQUALITIES AND MIRACLES ON THE U.S.MEXICO BORDER, by Robert J. Durán. In this work, Durán analyzes the impact of deportation, incarceration, and racialized perceptions of criminality on Latino families and youth along the U.S.-Mexico border. He finds significantly less gang membership and activity than common fearmongering claims would have us believe.

Robert J. Durán is associate professor of sociology at Texas A&M University. He is the author of Gang Life in Two Cities: An Insider’s Journey (Columbia, 2013).