The Gathering of Intentions

A History of a Tibetan Tantra 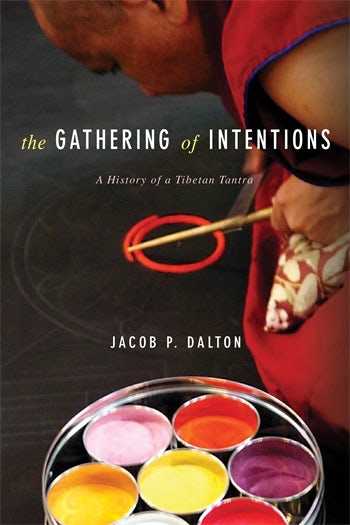 The Gathering of Intentions

A History of a Tibetan Tantra

The Gathering of Intentions reads a single Tibetan Buddhist ritual system through the movements of Tibetan history, revealing the social and material dimensions of an ostensibly timeless tradition. By subjecting tantric practice to historical analysis, the book offers new insight into the origins of Tibetan Buddhism, the formation of its canons, the emergence of new lineages and ceremonies, and modern efforts to revitalize the religion by returning to its mythic origins.

The ritual system explored in this volume is based on the Gathering of Intentions Sutra, the fundamental "root tantra" of the Anuyoga class of teachings belonging to the Nyingma ("Ancient") school of Tibetan Buddhism. Proceeding chronologically from the ninth century to the present, each chapter features a Tibetan author negotiating a perceived gap between the original root text—the Gathering of Intentions—and the lived religious or political concerns of his day. These ongoing tensions underscore the significance of Tibet's elaborate esoteric ritual systems, which have persisted for centuries, evolving in response to historical conditions. Rather than overlook practice in favor of philosophical concerns, this volume prioritizes Tibetan Buddhism's ritual systems for a richer portrait of the tradition.

The Gathering of Intentions makes a valuable contribution to the field of Tibetan and Buddhist studies and will attract nonacademic readers who are interested in learning about the practice of Tibetan Buddhism. The organization of the book is thoughtfully crafted, the content coverage thorough and wide-ranging, the scholarship superb, and the arguments clear and persuasive. Bryan J. Cuevas, author of Travels in the Netherworld: Buddhist Popular Narratives of Death and the Afterlife in Tibet

The Gathering of Intentions is an essential contribution to the study of Tibetan Buddhism. This learned and lucid book is an important, insightful, and groundbreaking study of a worthy subject that takes a valuable historical approach to interpreting the development of a Tibetan Buddhist tradition over an extended period of time. In so doing, it provides critical perspectives on both the distinctive moments it explores and the long-term impact of a quietly influential scriptural tradition. Christian K. Wedemeyer, author of Making Sense of Tantric Buddhism: History, Semiology, and Transgression in the Indian Traditions

The Gathering of Intentions takes a single tantra and shows how it has been at the center of the religious life of practitioners of the Nyingma tradition of Tibet, from the wandering yogins of the tenth century to the Fifth Dalai Lama in the seventeenth and the Tibetan exile communities of the present day. One of the best things about this fascinating book is how Dalton brings together the earliest sources for understanding Tibetan Buddhism with the living, breathing tradition as it exists today in Tibet and across the world. Sam van Schaik, author of Tibet: A History

Dalton illuminates an important and understudied Buddhist tradition.... A useful case study for those interestd in the history of religions in general as well as a valuable resource for students and scholars of Tibetan religion and history. Highly recommended. CHOICE

This volume prioritizes Tibetan Buddhism's ritual systems for a richer portrait of the tradition. Buddhism Now

This book [is] a very valuable contribution to the study of Tibetan Buddhism. BizIndia

Without a doubt this is a highly recommended book and a very successful exploration of the life and vicissitudes of a single tantra. H-Buddhism

A valuable, information-packed resource for the study of canon, institution, and ritualism in Tibet. Reading Religion

Preface
Introduction
1. Origins: Myth and History
2. The Gathering of Intentions in Early Tibetan Tantra
3. The Spoken Teachings
4. The Rise of the Sutra Initiation
5. Dorjé Drak and the Formation of a New Lineage
6. The Mindröling Tradition
7. Returns to the Origin
Appendix: The Four Root Tantras of Anuyoga
Notes
Glossary
Bibliography
Index