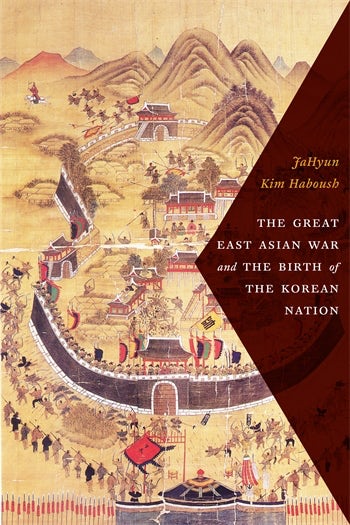 The Imjin War (1592–1598) was a grueling conflict that wreaked havoc on the towns and villages of the Korean Peninsula. The involvement of Chinese, Japanese, and Korean forces, not to mention the regional scope of the war, was the largest the world had seen, and the memory dominated East Asian memory until World War II. Despite massive regional realignments, Korea's Chosôn Dynasty endured, but within its polity a new, national discourse began to emerge. Meant to inspire civilians to rise up against the Japanese army, this potent rhetoric conjured a unified Korea and intensified after the Manchu invasions of 1627 and 1636.

By documenting this phenomenon, JaHyun Kim Haboush offers a compelling counternarrative to Western historiography, which ties Korea's idea of nation to the imported ideologies of modern colonialism. She instead elevates the formative role of the conflicts that defined the second half of the Chosôn Dynasty, which had transfigured the geopolitics of East Asia and introduced a national narrative key to Korea's survival. Re-creating the cultural and political passions that bound Chosôn society together during this period, Haboush reclaims the root story of solidarity that helped Korea thrive well into the modern era.

As the first work to thoroughly examine the formation of the Korean nation before the modern era, The Great East Asian War and the Birth of the Korean Nation is an enormous contribution to scholarship on Korean and East Asian history and to the study of nations and nationalism throughout the world. It is certain to cement JaHyun Kim Haboush's legacy as one of the most brilliant scholars of her era. Jungwon Kim, Columbia University, co-translator of Wrongful Death: Selected Inquest Records from Nineteenth Century Korea

This singular book can be savored on many levels. The lover of fiction will find high dramas of alien invasions and sacked homes, replete with blood and valor worthy of Hollywood. The scholar—of East Asia or elsewhere—will be challenged to rethink the relationship between the nation, language, and modernity. It saddens me that there will be no more books by the incomparable JaHyun Kim Haboush after this one. Dorothy Ko, Barnard College, coeditor of The Birth of Chinese Feminism: Essential Texts in Transnational Theory

A welcome addition to recent scholarship.... Haboush's manuscript leaves readers with much to ponder about the Imjin War, literature, and nationhood in the premodern world.... Highly recommended. Choice

Required reading for anyone interested in the discourse of a nation more generally and in this particular war. The Sixteenth Century Journal

A welcome contribution to the study of Chosŏn Korea. Nam-Lin Hur, Journal of Asian Studies

For her service, Haboush deserves our praise, and I am glad that her widower, her students, and her friends brought these unfinished notes to light. We have a significant contribution in this slim volume. Monumenta Nipponica 72:1

Foreword, by William J. Haboush
Introduction
1. The Volunteer Army and the Discourse of Nation
2. The Volunteer Army and the Emergence of Imagined Community
3. War of Words: The Changing Nature of Literary Chinese in the Japanese Occupation
4. Language Strategy: The Emergence of a Vernacular National Space
5. The Aftermath: Dream Journeys and the Culture of Commemoration
Publications by JaHyun Kim Haboush
Notes
Bibliography
Index

JaHyun Kim Haboush (1940–2011) was the King Sejong Professor of Korean Studies at Columbia University. Her Columbia University Press publications include A Korean War Captive in Japan, 1597–1600: The Writings of Kang Hang (2013); Epistolary Korea: Letters in the Communicative Space of the Chosôn, 1392–1910 (2009); The Confucian Kingship in Korea: Yôngjo and the Politics of Sagacity (2001); and A Heritage of Kings: One Man's Monarchy in the Confucian World (1988).

William J. Haboush is professor of mathematics at the University of Illinois at Urbana-Champaign.