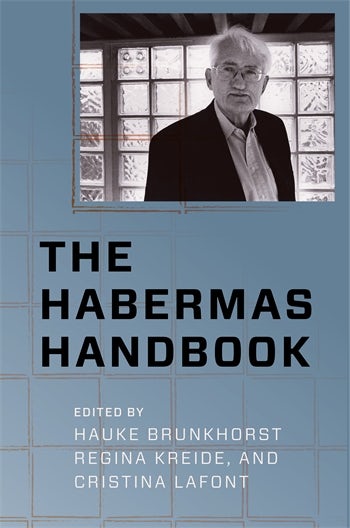 Jürgen Habermas is one of the most influential philosophers of our time. His diagnoses of contemporary society and concepts such as the public sphere, communicative rationality, and cosmopolitanism have influenced virtually all academic disciplines, spurred political debates, and shaped intellectual life in Germany and beyond for more than fifty years. In The Habermas Handbook, leading Habermas scholars elucidate his thought, providing essential insight into his key concepts, the breadth of his work, and his influence across politics, law, the social sciences, and public life.

This volume offers a comprehensive overview and an in-depth analysis of Habermas’s work in its entirety. After examining his intellectual biography, it goes on to illuminate the social and intellectual context of Habermasian thought, such as the Frankfurt School, speech-act theory, and contending theories of democracy. The Handbook provides an extensive account of Habermas’s texts, ranging from his dissertation on Schelling to his most recent writing about Europe. It illustrates the development of his thought and its frequently controversial reception while elaborating the central ideas of his work. The book also provides a glossary of key terms and concepts, making the complexity of Habermas’s thought accessible to a broad readership.

This volume is, and will likely remain for the indefinite future, the most definitive and exhaustive scholarly compendium on Habermas's life work. An astoundingly comprehensive study of virtually every detail of Habermas's thought, spanning disciplines. David Ingram, Loyola University (Chicago)

This Habermas Handbook will be the indispensable guide to one of the great philosophers of our time. More than fifty contributors, all of them experts on Habermas’s thought and many of them eminent thinkers in their own right, explain clearly and incisively his key influences, concepts, and texts. Anyone—from the novice approaching Habermas’s writings for the first time to the countless philosophers and social thinkers already inspired by his work—will find this book invaluable. Charles Larmore, author of The Autonomy of Morality

Habermas is the foremost social and political theorist of our era. His work is vital to a wide range of crucial public debates and scholarly inquiries. This book will be an indispensable guide not just to those newly discovering Habermas but also to those seeking to understand the wide reach of his work. Craig Calhoun, president, Berggruen Institute

More than two centuries ago, the German philosopher Immanuel Kant declared that “ours is the age of critique, to which everything must submit.” In our own chastened and more uncertain times, no philosopher has inherited the critical spirit of Kant’s Enlightenment with as much conviction as Jürgen Habermas, and no one has sustained the same admirable and unwavering fidelity to the principle that rational criticism must serve as the shared medium of our common world. Designed for both the specialist and the general reader alike, this superb volume offers a rich portrait of the thinker, his major works, and his remarkable contribution to philosophy and social theory. Peter E. Gordon, author of Adorno and Existence

A tremendous achievement which will serve grateful readers for many years to come. H-Ideas

Hauke Brunkhorst is senior professor of sociology at the European University–Flensburg. His books include Adorno and Critical Theory (1999); Solidarity: From Civic Friendship to a Global Legal Community (2005); and Critical Theory of Legal Revolutions: Evolutionary Perspectives (2014).

Regina Kreide is professor of political theory and the history of ideas at the Justus Liebig University of Giessen. She is the coauthor of Transformation of Democracy: Crisis, Protest, and Legitimation (2015) and The Power Dynamics of Securitization (2017).

Cristina Lafont is professor of philosophy at Northwestern University. She is the author of The Linguistic Turn in Hermeneutic Philosophy (1999); Heidegger, Language, and World-Disclosure (2000); and Global Governance and Human Rights (2012) and coeditor of Critical Theory in Critical Times: Transforming the Global Political and Economic Order (Columbia, 2017).