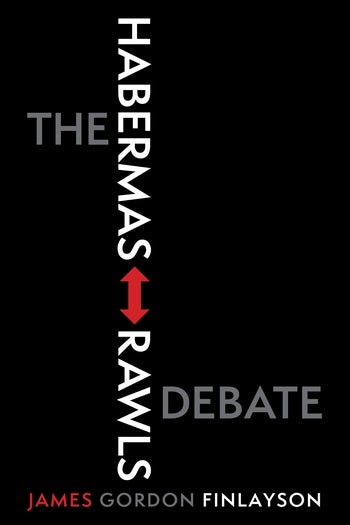 Jürgen Habermas and John Rawls are perhaps the two most renowned and influential figures in social and political philosophy of the second half of the twentieth century. In the 1990s, they had a famous exchange in the Journal of Philosophy. Quarreling over the merits of each other’s accounts of the shape and meaning of democracy and legitimacy in a contemporary society, they also revealed how great thinkers working in different traditions read—and misread—one another’s work.

In this book, James Gordon Finlayson examines the Habermas-Rawls debate in context and considers its wider implications. He traces their dispute from its inception in their earliest works to the 1995 exchange and its aftermath, as well as its legacy in contemporary debates. Finlayson discusses Rawls’s Political Liberalism and Habermas’s Between Facts and Norms, considering them as the essential background to the dispute and using them to lay out their different conceptions of justice, politics, democratic legitimacy, individual rights, and the normative authority of law. He gives a detailed analysis and assessment of their contributions, assessing the strengths and weaknesses of their different approaches to political theory, conceptions of democracy, and accounts of religion and public reason, and he reflects on the ongoing significance of the debate. The Habermas-Rawls Debate is an authoritative account of the crucial intersection of two major political theorists and an explication of why their dispute continues to matter.

Just at the moment when the Habermas-Rawls debate seemed to evanesce from the sight of the intellectual public, this brilliant book proves this first impression to be false: Gordon Finlayson succeeds in demonstrating with stupendous lucidity and admirable acuteness how topical the questions are that the two philosophers had discussed in their exchange on how best to conceive of the democratic principle of social equality. My guess is that it will be impossible in the near future to tackle normative questions within political philosophy without consulting this book. Axel Honneth, Jack C. Weinstein Professor of the Humanities, Columbia University

In a series of reviews and comments that spanned the Atlantic Ocean, the debate between Jürgen Habermas and John Rawls represents one of those rare moments of dialogue between Continental and Anglo-American political thought. It marks a pivotal chapter in the history of modern philosophy, not because it reached any definitive resolution, but chiefly because it served as the occasion for mutual criticism and raised challenging questions for both political liberalism and critical theory alike. With uncommon clarity and without the least hint of partisanship, James Gordon Finlayson has written a superb and illuminating exposition of this philosophical encounter. Peter E. Gordon, Amabel B. James Professor of History and Faculty Affiliate in Philosophy, Harvard University

Finlayson provides an exhaustive, rigorous, and crystal-clear reconstruction and analysis of the Habermas-Rawls debate that highlights its philosophical stakes and ongoing relevance. A must read for anyone interested in the work of these two giants of contemporary moral and political philosophy. Amy Allen, Liberal Arts Professor of Philosophy and Women's, Gender, and Sexuality Studies, Penn State University

This book is not only a careful reconstruction of the intellectual exchange between Habermas and Rawls, arguably the two most important figures of contemporary political philosophy. It is also a deep reflection on the philosophical foundations of liberal democracy in a postmetaphysical age. A champion of neither but a scrupulous scholar of both Habermas and Rawls, Finlayson provides an analysis of this important debate that is exhaustive and to my mind spot on. Simone Chambers, University of California, Irvine

This will certainly be the go-to resource on this debate for anyone studying social or political philosophy in the future. Finlayson is the world’s foremost expert on the Habermas-Rawls exchange. He is also, in my opinion, the best 'analytic' Habermas scholar in the world. After reading this book, I’m not sure if there is anything left to be said on the topic; it’s all here. Joseph Heath, University of Toronto

This book should quickly establish itself as the definitive account of the debate. It is lucid and penetrating, drilling deeply into both the inner workings of the theories that serve as the debate's backdrop, as well as the parries and thrusts of the exchange itself. Political Theory

A well-informed and detailed account of the exchange between Habermas and Rawls about questions of political justice and legitimacy. Wilfried Hinsch, Universität zu Köln, Notre Dame Philosophical Reviews

Acknowledgments
List of Abbreviations
Introduction: Much Ado About Nothing
I. The Early Debate
1. Two Nonrival Theories of Justice
2. Habermas’s Early Criticisms of Rawls
II. Habermas’s and Rawls’s Mature Political Theories
3. Habermas’s Between Facts and Norms
4. Rawls’s Political Liberalism
III. The Exchange
5. Habermas’s “Reconciliation Through the Public Use of Reason”
6. Rawls’s “Reply to Habermas”
7. “‘Reasonable’ Versus ‘True’”: Habermas’s Reply to Rawls’s “Reply”
IV. The Legacy of the Habermas–Rawls Debate
8. Religion Within the Bounds of Public Reason Alone
Conclusion
Notes
Bibliography
Index

James Gordon Finlayson is reader in philosophy and director of the Centre for Social and Political Thought at the University of Sussex. He is the author of numerous articles on post-Kantian philosophy and critical theory, as well as Habermas: A Very Short Introduction (2005), and the editor of Habermas and Rawls: Disputing the Political (2011).