The Hockey Stick and the Climate Wars

Dispatches from the Front Lines

Michael E. Mann. With a foreword by Bill Nye. 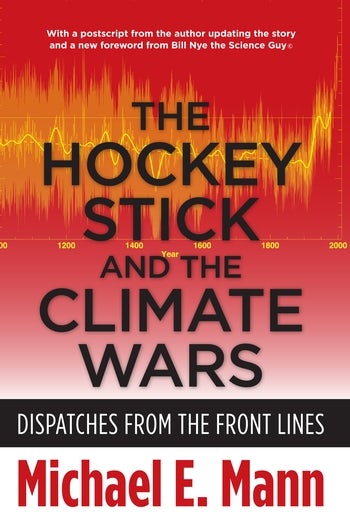 The Hockey Stick and the Climate Wars

Dispatches from the Front Lines

Michael E. Mann. With a foreword by Bill Nye.

The ongoing assault on climate science in the United States has never been more aggressive, more blatant, or more widely publicized than in the case of the Hockey Stick graph—a clear and compelling visual presentation of scientific data, put together by MichaelE. Mann and his colleagues, demonstrating that global temperatures have risen in conjunction with the increase in industrialization and the use of fossil fuels. Here was an easy-to-understand graph that, in a glance, posed a threat to major corporate energy interests and those who do their political bidding. The stakes were simply too high to ignore the Hockey Stick—and so began a relentless attack on a body of science and on the investigators whose work formed its scientific basis.

The Hockey Stick achieved prominence in a 2001 UN report on climate change and quickly became a central icon in the "climate wars." The real issue has never been the graph's data but rather its implied threat to those who oppose governmental regulation and other restraints to protect the environment and planet. Mann, lead author of the original paper in which the Hockey Stick first appeared, shares the story of the science and politics behind this controversy. He reveals key figures in the oil and energy industries and the media frontgroups who do their bidding in sometimes slick, sometimes bare-knuckled ways. Mann concludes with the real story of the 2009 "Climategate" scandal, in which climate scientists' emails were hacked. This is essential reading for all who care about our planet's health and our own well-being.

In this meticulous and engaging brief on climate change research and the political backlash to legitimate scientific work, Penn State professor Mann narrates the fight against misinformation from the inside. Publishers Weekly

An important and disturbing account of the fossil-fuel industry's well-funded public-relations campaign to sow doubt about the validity of the science of climate change...This blistering indictment of corporate-funded chicanery demands a wide audience. Kirkus Reviews (starred review)

And if you read just one book on climate change, make it Michael E. Mann's riveting exposé of disinformation and denial.... Irish Times

The best part, in my science-geeky opinion, is readers of this book will enjoy a dazzling, informative tour of the science underlying climatology and especially the analysis that went into the diagram that caused all the ruckus. DarkSyde, Daily Kos

A harrowing ride through the politics of truth and denial. Shawn Lawrence Otto, Huffington Post

...this is a book you should read, because it clearly shows the contrast between how science works and how politics works. The difference is dramatic. And fateful. Ben Bova, Naples Daily News

A must read for every serious student of climate change science, and gets my highest rating: five stars out of five. Jeff Masters, Jeff Masters WunderGround Blog

I heartily recommend this book for an unusually clear view of the action on the front line of climate science from one of its principle palaeoclimate protagonists. Colin Summerhayes, Geoscientist

Mann deserves our respect and admiration for what he has been through and for his willingness to discuss it. The narrative is a deeply honest scientific coming-of-age story. Naomi Oreskes, Physics Today

This book is well written and tells a remarkable story that is likely to be of interest to a wide range of readers. Australian Book Review

Mann's honest and thorough testimony on the attacks against climate science is a critical step toward resolving the climate change debate. Science

One of the most useful books yet in explaining climate science, especially the use of paleoclimate proxy data to assess the history of Earth's climate. Rudy M. Baum, Chemical & Engineering News

Confronting climate change will require clear scientific thinking and courageous actions by many individuals. Dr, Mann's book details the powerful evidence supporting climate change as well as the relentless attempts by climate deniers to distort climate science and attack those who are speaking the truth about it. Jerry Brown, governor of California

A very entertaining book that winds its way through the thicket of climate science and politics. Natural Hazards Observer

Mann deserves praise for taking the time to speak to other scientists and citizens about what threatens us all. He is not only a brilliant scientist but an ethical hero, a model for all. Kristin Shrader-Frechette, Metascience

If you read only one book on climate change, this one is hard to beat. Perspectives on Science and Christian Faith

Abbreviations and Acronyms
Prologue: What Is the Hockey Stick?
1. Born in a War
2. Climate Science Comes of Age
3. Signals in the Noise
4. The Making of the Hockey Stick
5. The Origins of Denial
6. A Candle in the Dark
7. In the Line of Fire
8. Hockey Stick Goes to Washington
9. When You Get Your Picture on the Cover of...
10. Say it Ain't So (Smokey) Joe!
11. A Tale of Two Reports
12. Heads of the Hydra
13. The Battle of the Bulge
14. Climategate: The Real Story
15. Fighting Back
Epilogue
Glossary
Notes
Selected Bibliography
Acknowledgments
Index

Read an excerpt from the new postscript to the paperback edition:

Michael E. Mann is Distinguished Professor of Meteorology and Director of the Earth Systems Science Center at Penn State University. Despite being in the public eye, he continues an active research program in climate science and has published over 160 peer-reviewed papers in leading scientific journals. He is a fellow of the American Meteorological Society and the American Geophysical Union. In 2012 he received the Hans Oeschger Medal of the European Geosciences Union. Along with other scientists, he contributed to the reports of the IPCC, which was awarded a Nobel Peace Prize in 2007. He is also a co-founder of the award-winning website www.RealClimate.org.