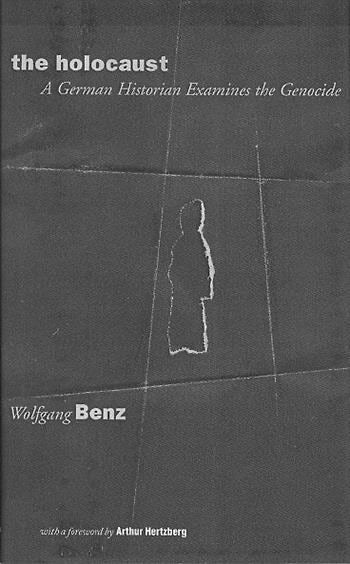 The history of the Holocaust keeps being written and rewritten in ever greater detail, but almost always by Jews. Wolgang Benz's book makes an important contribution by bringing the German perspective to this horrific event. A masterpiece of compression, the books covers all the major topics and issues, from the Wannsee Conference of January 20, 1942, to stripping Jews of their civil rights, from the establishment of ghettos to the creation of killing centers and the development of an efficient system for extermination. The book also includes a chapter on "The Other Genocide: The Persecution of the Sinti and Roma," detailing the crusade against the Gypsies.

From the Foreword by Arthur Hertzberg:

Benz's account is the necessary 'first course' for anyone who wants to know about the Holocaust and to think further about its meaning for humanity. It is of particular importance that the historian who has written this book is a German. This account is trustworthy because its author combines within himself the rare authority of someone who belongs to the past of his nation. He has both understood and transcended its history in this century. The subject of the book, the Holocaust, is somber beyond words, but this account in Benz's words is a cause for hope.

This will be an essay of choice for anyone wishing a sophisticated description of the major aspects of the genocide of the Jews. Deborah E. Lipstadt, Washington Post

By detailing the events that led Jews to be stripped of their rights, resettled in ghettos and deported to the killing centers, Benz's work provides and indisputable record of the Nazi genocide. Hadassah Magazine

A good, short history of the Holocaust. Neue Zürcher Zeitung

1. Talks Followed by Breakfast: The Wannsee Conference of January 20, 1942
2. German Jews and National Socialism: Self-Image and Threat
3. Exclusion and Discrimination of the Jews in Germany, 1933–1939
4. Jewish Emigration, 1933–1941
5. Aryanization and the Jewish Star: German Jews Are Totally Stripped of Their Civil Rights, 1939–1941
6. Ghettos in Occupied Eastern Europe: The Beginning of the Final Solution of the Jewish Question
7. From Antisemitism to Genocide: The Genesis of the Final Solution
8. Massacre in the East: Einsatzgruppen and Other Killing, 1941–1942Units in the Occupied Territories
9. The Deportation of the Jews from Germany
10. Theresienstadt
11. The Other Genocide: The Persecution of the Sinti and Roma
12. Industrialized Mass Murder in the Extermination Camps, by 1942–1944

Wolfgang Benz is professor of antisemitism research at the Technical University of Berlin. He has written numerous studies on the history of the Jews during the Third Reich, including The Jews of Germany, 1933-1945 and Dimension des Völkermords (Dimension of Genocide).Arthur Hertzberg is professor of Jewish Studies at New York University. He is the author of The Jews in America: Four Centuries of an Uneasy Encounter: A History (Columbia) and The Zionist Idea: A Historical Analysis and Reader.