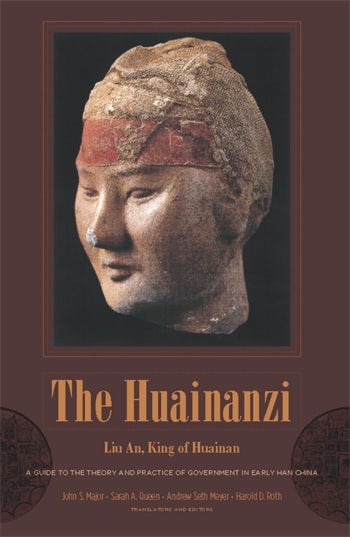 Compiled by scholars at the court of Liu An, king of Huainan, in the second century B.C.E, The Huainanzi is a tightly organized, sophisticated articulation of Western Han philosophy and statecraft. Outlining "all that a modern monarch needs to know," the text emphasizes rigorous self-cultivation and mental discipline, brilliantly synthesizing for readers past and present the full spectrum of early Chinese thought.

The Huainanzi locates the key to successful rule in a balance of broad knowledge, diligent application, and the penetrating wisdom of a sage. It is a unique and creative synthesis of Daoist classics, such as the Laozi and the Zhuangzi; works associated with the Confucian tradition, such as the Changes, the Odes, and the Documents; and a wide range of other foundational philosophical and literary texts from the Mozi to the Hanfeizi.

The product of twelve years of scholarship, this remarkable translation preserves The Huainanzi's special rhetorical features, such as parallel prose and verse, and showcases a compositional technique that conveys the work's powerful philosophical appeal. This path-breaking volume will have a transformative impact on the field of early Chinese intellectual history and will be of great interest to scholars and students alike.

Users of this magnificent contribution to the study of Chinese thought will find here almost everything imaginable. Russell Kirkland, Religious Studies Review

It is a major accomplishment in every sense of the term. Mark Csikszentmihalyi, Journal of Chinese Studies

In sum, this volume bringing to annotated translation all 21 chapters of the Huainanzi will invaluably ease and enhance the work of future scholars. Benjamin E. Wallacker, Journal of Asian History

[An] epochal achievement.... The Huainanzi vibrates with the authors' intellectual confidence.... this translation of the Huainanzi is a convenient and reassuring shortcut into the heart of traditional China. Barbara Hendrischke, Monumenta Serica

This English version earns for the Huainanzi the widespread recognition as anepochal classic that it deserves, and at the same time provides a resource forspecialists. The translations are carefully thought out but evocative. China Review International

[The translations] are outstanding in every way. . . . The translations are completed in a high level literary fashion that models the original. They are fluid and enjoyable to read. James D. Sellmann, Dao

Acknowledgments
Introduction
1. Originating in the Way
2. Activating the Genuine
3. Celestial Patterns
4. Terrestrial Forms
5. Seasonal Rules
6. Surveying Obscurities
7. Quintessential Spirit
8. The Basic Warp
9. The Ruler's Techniques
10. Profound Precepts
11. Integrating Customs
12. Responses of the Way
13. Boundless Discourses
14. Sayings Explained
15. An Overview of the Military
16. and 17. A Mountain of Persuasions and A Forest of Persuasions
18. Among Others
19. Cultivating Effort
20. The Exalted Lineage
21. An Overview of the Essentials
Appendix A. Key Chinese Terms and Their Translations
Appendix B. Categorical Terms
Appendix C. A Concise Textual History of the Huainanzi and a Bibliography of Huainanzi Studies
Index

John S. Major, formerly professor of history at Dartmouth College, is an independent scholar and writer. He is the author of Heaven and Earth in Early Han Thought: Chapters Three, Four, and Five of the Huainanzi and the author, coauthor, or editor of almost thirty other books, including Defining Chu: Image and Reality in Ancient China.

Sarah A. Queen, professor of history at Connecticut College, is the author of From Chronicle to Canon: The Hermeneutics of the Spring and Autumn, According to Tung Chung-shu. Her current work includes a translation and study of the Luxuriant Gems of the Spring and Autumn (with John S. Major) and an edited volume, Liu An's Vision of Empire: New Perspectives on the Huainanzi (with Michael Puett).

Andrew Seth Meyer, assistant professor of history at Brooklyn College, is the author of several articles, including "The Sunzi bingfa as History and Theory." His current projects are To Rule All Under Heaven, a history of the Warring States period (481-221 B.C.E.), and a translation of the Wenzi (with Harold D. Roth).

Harold D. Roth, professor of religious studies and East Asian studies at Brown University, is the author or editor of four books and more than forty scholarly articles. His books include The Textual History of the Huai-nan tzu and Original Tao: Inward Training and the Foundations of Taoist Mysticism.

Michael Puett, professor of Chinese history at Harvard University, is the author, most recently, of Ritual and Its Consequences: An Essay on the Limits of Sincerity.

Judson Murray, assistant professor of religion at Wright State University, is the author of "A Study of 'Yaolue,' 'A Summary of the Essentials': Understanding the Huainanzi Through the Point of View of the Author of the Postface."