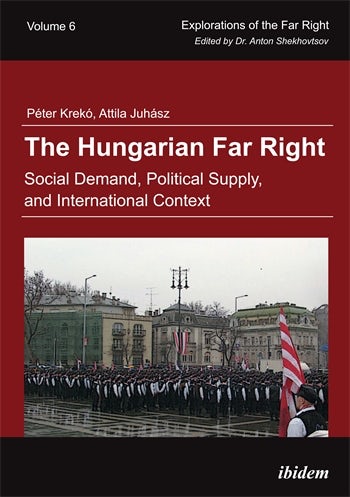 This timely book examines far-right politics in Hungary—but its relevance points much beyond Hungary. With its two main players, the radical right Jobbik and populist right Fidesz, it is at the same time an Eastern European, European, and global phenomenon. Jobbik and Fidesz, political parties with a populist, nativist, authoritarian approach, Eastern and pro-Russian orientation, and strong anti-Western stance, are on the one hand products of the problematic transformation period that is typical for post-communist countries. But they are products of a "populist zeitgeist" in the West as well, with declining trust in representative democratic and supranational institutions, politicians, experts, and the mainstream media. The rise of politicians such as Nigel Farage in the U.K., Marine Le Pen in France, Norbert Hofer in Austria, and, most notably, Donald Trump in the U.S. are clear indications of this trend.

In this book, the story of Jobbik (and Fidesz), contemporary players of the Hungarian radical right scene, are not treated as separate case studies, but as representatives of broader international political trends. Far-right parties such as Jobbik (and increasingly Fidesz) are not pathologic and extraordinary, but exaggerated, seemingly pathological manifestations of normal, mainstream politics. The radical right is not the opposite and denial of the mainstream, but the sharp caricature of the changing national, and often international mainstream.

Interesting reading for all those wanting to know more about the appeal of the far right in Hungary. H-Socialisms

Péter Krekó is a Fulbright visiting professor at the Central Eurasian Studies Department and a faculty member at the Russian and Eastern European Institute at Indiana University, Bloomington. He served as director of the Political Capital Institute, a Budapest-based think tank, and was an associate professor at Eötvös Loránd University of Science in Budapest. He has published articles in Foreign Affairs, Newsweek, and the Financial Times.

Attila Juhász, currently the director of the Political Capital Institute, Budapest, is a Ph.D. candidate at the Doctoral School of Sociology and Welfare, an interdisciplinary research program at Eötvös Lóránd University, Faculty of Social Sciences, Budapest. He is a lecturer at Pannon University, Veszprém, Hungary.