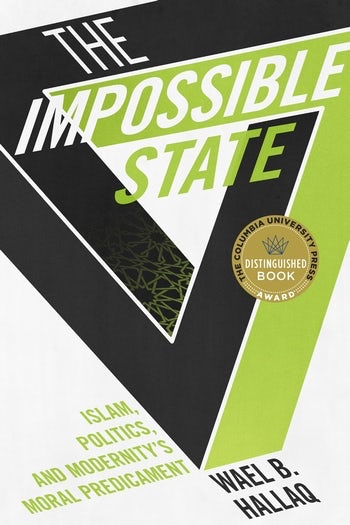 Wael B. Hallaq boldly argues that the "Islamic state," judged by any standard definition of what the modern state represents, is both impossible and inherently self-contradictory. Comparing the legal, political, moral, and constitutional histories of premodern Islam and Euro-America, he finds the adoption and practice of the modern state to be highly problematic for modern Muslims. He also critiques more expansively modernity's moral predicament, which renders impossible any project resting solely on ethical foundations.

The modern state not only suffers from serious legal, political, and constitutional issues, Hallaq argues, but also, by its very nature, fashions a subject inconsistent with what it means to be, or to live as, a Muslim. By Islamic standards, the state's technologies of the self are severely lacking in moral substance, and today's Islamic state, as Hallaq shows, has done little to advance an acceptable form of genuine Shari'a governance. The Islamists' constitutional battles in Egypt and Pakistan, the Islamic legal and political failures of the Iranian Revolution, and similar disappointments underscore this fact. Nevertheless, the state remains the favored template of the Islamists and the ulama (Muslim clergymen).

Providing Muslims with a path toward realizing the good life, Hallaq turns to the rich moral resources of Islamic history. Along the way, he proves political and other "crises of Islam" are not unique to the Islamic world nor to the Muslim religion. These crises are integral to the modern condition of both East and West, and by acknowledging these parallels, Muslims can engage more productively with their Western counterparts.

This is a bracing, erudite, and compelling account of the moral, political, and structural features of Islamic governance and the modern state, as well as of the multiple incongruities that hamper any attempt to establish one in terms of the other. Wael Hallaq delivers a welcome rejoinder to much of the dogmatic bluster swirling around the subject of shari'a and the Islamic state. At the same time, he brings into sharp focus the often overlooked resources for reconceptualizing 'the modern project' from within both Islamic and Euro-American traditions of moral and political thought. The historical, theoretical, and political richness of this account makes The Impossible State a new standard against which any claims about the possibility of establishing Islamic governance in the contemporary world must now be evaluated. Roxanne L. Euben, Wellesley College

A provocative and wide-ranging rumination by one of the leading scholars of Islamic law, this book poses tough questions to champions and critics of shari'a alike. Wael Hallaq makes a powerful argument for the relevance of shari'a as a moral discourse while remaining critical of its compatibility with the modern state. The Impossible State is bound to elicit debate among scholars of Islam, moral philosophy, and modernity across the Western and non-Western divide. Saba Mahmood, author of Politics of Piety: The Islamic Revival and the Feminist Subject

It is an important contribution to understanding the role and potential of the shari'a in the modern world. Mark D. Welton, Middle East Journal

A refreshing take on the modern state and Islamic governance. Middle East Media and Book Reviews

This book brings a detailed and impassioned exploration of key debates in Islamic law and governance into sustained conversation with canonical texts in Western political and legal theory.... The Impossible State makes an important theoretical contribution. Iza Hussin, Perspectives on Politics

An important, bold, and courageous intervention that stands out not just in contemporary debates on the Shari'ah in the West and the Muslim world, but in all modern writing about the subject. American Journal of Islamic Social Sciences

Wael Hallaq skillfully navigates through the dominant philosophical and sociological arguments.... The book is a must read for anyone even remotely dealing with conceptualisations of modernity, the state and Islamic governance. Political Studies Review

An important book by a well recognized scholar on an extremely important and difficult topic. Religious Studies Review

In the light of the ongoing events in the Arab world today... it is difficult to imagine a more relevant and timely contribution. Islam and Christian-Muslim Relations

Hallaq takes a multidisciplinary approach to diagnose the problems of modernity and, grounded in his unparalled knowledge of Islamic history in general and the Sharia in particular, produces a unique critique of modernity from outside modernity. Morocco World News

Preface and Acknowledgments
Introduction
1. Premises
2. The Modern State
3. Separation of Powers: Rule of Law or Rule of the State?
4. The Legal
5. The Political Subject and Moral Technologies of the Self
6. Beleaguering Globalization and Moral Economy
7. The Central Domain of the Moral
Notes
Glossary of Key Terms
Bibliography
Index

Wael B. Hallaq is the Avalon Foundation Professor in the Humanities at Columbia University. Hallaq's research spans several fields, including law, legal theory, philosophy, political theory, and logic, and his publications include The Impossible State: Islam, Politics, and Modernity's Moral Predicament, Shari'a: Theory, Practice, Transformations; An Introduction to Islamic Law; and Authority, Continuity, and Change in Islamic Law. His works have been translated into several languages, including Arabic, Indonesian, Hebrew, Japanese, Persian, Turkish, and Russian.