The Inquisition of Climate Science 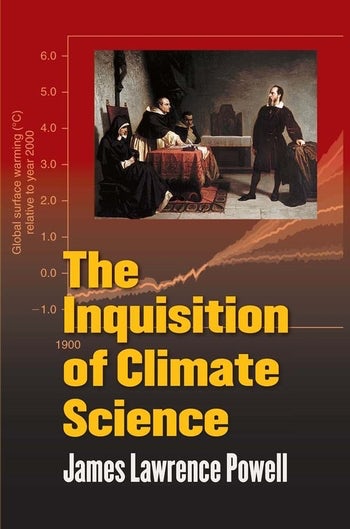 The Inquisition of Climate Science

Modern science is under the greatest and most successful attack in recent history. An industry of denial, abetted by news media and "info-tainment" broadcasters more interested in selling controversy than presenting facts, has duped half the American public into rejecting the facts of climate science—an overwhelming body of rigorously vetted scientific evidence showing that human-caused, carbon-based emissions are linked to warming the Earth. The industry of climate science denial is succeeding: public acceptance has declined even as the scientific evidence for global warming has increased. It is vital that the public understand how anti-science ideologues, pseudo-scientists, and non-scientists have bamboozled them. We cannot afford to get global warming wrong—yet we are, thanks to deniers and their methods.

The Inquisition of Climate Science is the first book to comprehensively take on the climate science denial movement and the deniers themselves, exposing their lack of credentials, their extensive industry funding, and their failure to provide any alternative theory to explain the observed evidence of warming. In this book, readers meet the most prominent deniers while dissecting their credentials, arguments, and lack of objectivity. James Lawrence Powell shows that the deniers use a wide variety of deceptive rhetorical techniques, many stretching back to ancient Greece. Carefully researched, fully referenced, and compellingly written, his book clearly reveals that the evidence of global warming is real and that an industry of denial has deceived the American public, putting them and their grandchildren at risk.

This book is a winner, written in an easy, logical style with thorough and fascinating discussions of major deniers. Orrin Pilkey, Duke University, coauthor of The Rising Sea

With the evidence for global warming so strong, why, Powell asks, does half the American public doubt it? His answer is a history of the campaign of denial, the most comprehensive and up-to-date history available. It is well written and well worth reading: this is the most important issue facing our generation. Spencer Weart, author of The Discovery of Global Warming

Powell consistently brings the sharp insight of a knowledgeable insider melded with the skepticism of a critical outsider to the most important issues in science. In his latest book—his best yet—he shows us the path to understanding climate change. Peter D. Ward, The University of Washington

James Lawrence Powell's must-read book is a welcome addition to the growing literature debunking fossil fuel-funded, anti-science disinformation. As Powell makes clear, it is time for scientists to stand up and be counted. Joseph Romm, editor of Climate Progress and senior fellow at American Progress

this is a highly authoritative and accessible book that should be read by everyone who has any doubts about the reality of climate change. Irish Times

Books like 'The Inquisition' offer a clear antidote to the evolving national viral infection of antiscience. Get it. Read it. Tell others about it. John Atcheson, 1895

By looking at climate science, business, politics, and media, Powell has taken a comprehensive approach, doing a thorough job of boxing in the deniers' arguments and deflating them while at the same time providing an accessible read for nonprofessionals. Library Journal Xpress Reviews

A masterful compilation of nearly all the evidence, not only for the reality of anthropogenic global warming, but especially answering point-by-point the ridiculous attempts by climate deniers to cloud and distort the issues by raising one bogus charge after another. Donald R. Prothero, Skeptic Blog

A rare look at the politicalization of an important science.... Recommended. Choice

...a worthwhile read...an invaluable tool for those of us that are committed to fighting against the assault on climate science, be it the writers, the teachers, the activists, the politicians, or the scientists. Sarah Kenehan, Environmental Philosophy

A clear antidote to the evolving national viral infection of antiscience. Get it. Read it. Tell others about it. John Atcheson, Science Progress

The Inquisition of Climate Science is an excellent, well-written book for the general audience which gives readers a broad view of organized attacks on climate science over the last few decades. Reports of the National Center for Science Education

The first book to examine the history and milieu of the climate science denial process as a whole... a 'must' for any college-level science collection. Midwest Book Review

Preface
Introduction
Not Skeptics, by Deniers
1. Science and Potemkin Science
Never a Crisis
A Political Movement
A Cheap Tuxedo
Better Than Scientists
2. Adventures in Denierland
Urban Myth?
Cave Junction
3. The Evidence for Consensus
Spam Filter
Newton's Second Law
Polling Scientists
An Extremely Pernicious Development
4. Discovery of Global Warming
One of the Oldest Theories
A Large-Scale Geophysical Experiment
5. The Greenhouse Effect: From Curiosity to Threat
Models Predict Warming
Globetrotters
The Intergovernmental Panel on Climate Change
6. Global Warming: All You Really Need to Know in One Chart
7. Tobacco Tactics: The Scientist-Deniers
All of Those People Are Wrong
With All Due Respect, by Dr. Michaels
The $45 Million Man
If Science Doesn't Have Integrity
Blue Marble
Nuke Vietnam?
Foot Soldier
8. Fear of State: The Nonscientists
Aren't You Embarrassed, by Mr. Will?
Once Again
The Lomborg Deception
Bed-Wetting, by Messianic
9. Toxic Tanks
Harry and Louise
Tale from the Crypt
Please Don't Poop in My Salad
Embarrassing General Marshall
Push Down on the Accelerator
10. An Industry to Trust
Most Profitable Company in History
An Industry That Cannot Afford Denial
11. Balance as Bias: How the Media Missed "The Story of the Century"
The Prestige Press
Plumes of Smoke from China
Carbongate
End of Objectivity?
Systemic Failure
12. Science Under Attack
It's the Sun, by Ozone
Testosterone
Watts Up with That?
Slap Shot
The Medieval Warm Period
Do Climate Models Work?
Did Global Warming End in 1998?
Chicken or Egg?
GRACE
Tropospheric Cooling?
13. Greatest Hoax in History?
Who's to Blame? Liberals, by of Course
To Command Spring
Funding Research
Traitors
14. Climategate: Much Ado About Nothing
One Million Words
Innocent of All Charges
Gates and More Gates
15. Anatomy of Denial
To Roll Back Industrial Society
16. Escalating Tactics
Monkey Trials
Old Virginia Home
17. Earning Trust
Appendix
Notes
Bibliography
Acknowledgments
Index

Read an excerpt from The Inquisition of Climate Science (to view in full screen, click on icon in bottom right-hand corner)

James Lawrence Powell was born and raised in Kentucky and graduated from Berea College. He received his Ph.D. in Geochemistry from the Massachusetts Institute of Technology and has had a distinguished career as a college teacher, college president, museum director, and author of books on earth science for general audiences. He serves as executive director of the National Physical Science Consortium, a partnership among government agencies and laboratories, industry, and higher education dedicated to increasing the number of American citizens with graduate degrees in the physical sciences and related engineering fields, emphasizing recruitment of a diverse applicant pool that includes women and minorities. He has taught at Oberlin College and has served as its acting president. He has also been president of Franklin and Marshall College, Reed College, the Franklin Institute Science Museum in Philadelphia, and the Los Angeles County Museum of Natural History. Both Presidents Ronald Reagan and George H.W. Bush appointed Powell to the National Science Board.