The Islamic Context of The Thousand and One Nights 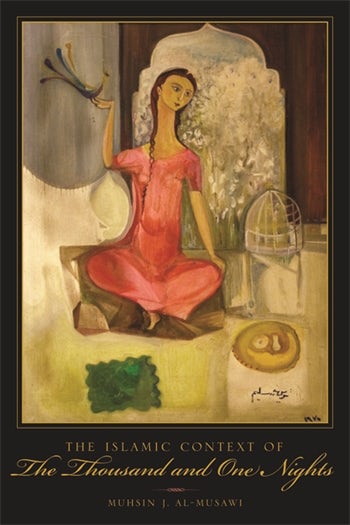 The Islamic Context of The Thousand and One Nights

In this fascinating study, Muhsin J. al-Musawi shows how deeply Islamic heritage and culture is embedded in the tales of The Thousand and One Nights (known to many as the Arabian Nights) and how this integration invites readers to make an Islamic milieu. Conservative Islam dismisses The Thousand and One Nights as facile popular literature, and liberal views disregard the rich Islamic context of the text. Approaching the text with a fresh and unbiased eye, al-Musawi reads the tales against Islamic schools of thought and theology and recovers persuasive historical evidence to reveal the cultural and religious struggle over Islam that drives the book's narrative tension and binds its seemingly fragmented stories.

Written by a number of authors over a stretch of centuries, The Thousand and One Nights depicts a burgeoning, urban Islamic culture in all its variety and complexity. As al-Musawi demonstrates, the tales document their own places and periods of production, reflecting the Islamic individual's growing exposure to a number of entertainments and temptations and their conflict with the obligations of faith. Aimed at a diverse audience, these stories follow a narrative arc that begins with corruption and ends with redemption, conforming to a paradigm that concurs with the sociological and religious concerns of Islam and the Islamic state. By emphasizing Islam in his analysis of these entertaining and instructional tales, al-Musawi not only illuminates the work's consistent equation between art and life, but he also sheds light on its underlying narrative power. His study offers a brilliant portrait of medieval Islam as well, especially its social, political, and economic institutions and its unique practices of storytelling.

A wide-ranging, detailed explication of the subject... Highly recommended. Choice

...a bursting portmanteau of intriguing details, a work of truly epic scope. This review cannot hope to do justice to the richness of the book...should be welcomed as an open door to a new generation of scholarship, an inspiration for graduate students in search of dissertation material and established scholars alike. Karla Mallette, H-Levant

Acknowledgments
Introduction: Is There an Islamic Context for The Thousand and One Nights?
1. The Islamic Factor in Global Times
2. The Unifying Islamic Factor
3. The Age of Muslim Empire and the Burgeoning of a Text
4. The Changing Order: The Role of the Public in The Thousand and One Nights
5. Nonreligious Displacements in Popular Tradition
6. The Public Role in Islamic Narrative Theorizations
7. Scheherazade's Nonverbal Narratives in Religious Contexts
Conclusions
Notes
Bibliography
Index

Muhsin J. al-Musawi is professor of Arabic and comparative studies at Columbia University. He has been teaching at the American University of Sharjah and taught at a number of Universities in North Africa and the Middle East. He has published many books in English and Arabic, including Scheherazade in England; Anglo-Orient; The Postcolonial Arabic Novel; Arabic Poetry: Trajectories of Modernity and Tradition; Reading Iraq: Culture and Power in Conflict; and Islam in the Street: The Islamic Dynamic in Literary Production, as well as four novels. He is the editor of the Journal of Arabic Literature and the recipient of many awards, including the prestigious Owais Award in literary criticism.