Intimate Confessions of a Homosexual to Émile Zola

Edited by Michael Rosenfeld with William A. Peniston 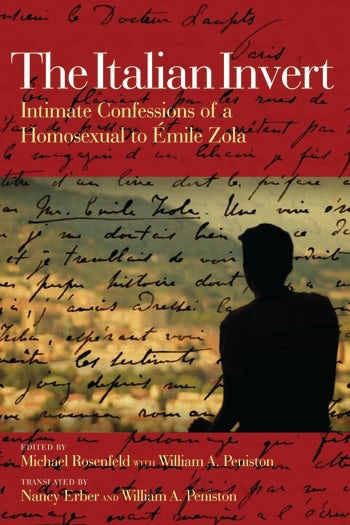 Intimate Confessions of a Homosexual to Émile Zola

Edited by Michael Rosenfeld with William A. Peniston

In the late 1880s, a dashing young Italian aristocrat confesses his life story to the famous novelist Émile Zola. In his revealing text, he frankly describes his seduction as a teenager by one of his father's (male) friends, his first love affair with a sergeant in his military regiment, and his “extraordinary” personality. Judging it too controversial, Zola gives it to a young doctor, Georges Saint-Paul, who publishes a censored version in 1896 in a medical study on sexual perversion. A few months later, the Italian finds this medical treatise in a bookstore and is shocked to discover that the doctor censored and distorted the most daring parts of his text in order to support his own theories. He protests by writing a long, unapologetic, and even more daring letter to the doctor, defending his right to lead his own life.

Based on the newly discovered manuscript of the letter to the doctor, along with some additional resources, this edition is the first complete, unexpurgated version in English of this very famous gay autobiography. It brings to light the uniquely nineteenth-century experience of a privileged young man, forthrightly expressing his desires and defending his right to pleasure. Two analytical essays—one by Michael Rosenfeld on the relationship between Zola, Saint-Paul, and the Italian "invert," and the other by Clive Thomson on the doctor’s career—provide further context to this remarkable voice from the past.

The Italian Invert is a rare autobiography in which a gay man frankly describes his desires, loves and life at the end of the nineteenth century. Written in French and previously published in censored versions only, recently discovered manuscripts allow readers to discover for the first time in English the complete story of this dashing young Italian aristocrat who dared to defend his right to sexual pleasure. It will appeal to anyone interested in the history of homosexuality, queer identities, or gender diversity. As an original source for the study of autobiographical texts as historical documents, it will serve undergraduate or graduate students in history and literature, in both French and Italian studies. Researchers in Jewish studies will be interested in the author’s revelations about his Jewish mother and her family. It is also an important addition to existing publications for historians of medicine, psychology, and sexology.

A brilliant archival discovery, a triumph of careful scholarship, an unsuspected episode in modern literature, a moving testimony about sex and love, and a fascinating, previously censored chapter in the history of sexuality. Rosenfeld masterfully restores the context in which conscious writing about homosexuality emerged in Europe during the last decades of the nineteenth century. David Halperin, W. H. Auden Distinguished University Professor, University of Michigan

The Italian Invert is a classic text of nineteenth-century sexology the interest of which is by no means limited to French (or Italian) studies. Richly enhanced here with critical notes, this volume makes a revised and expanded version of the primary documents available in English and also adds important essays that situate and enlarge their scope. . . . Whether one is interested in the history of (homo)sexuality or in literary questions . . . this is an indispensable tool that belongs on every researcher's shelf. Melanie Hawthorne, Professor of French, Texas A&M University

Of all the confessions or autobiographies by homosexuals in the nineteenth century, few have attracted and retained as much interest as the one written by the so-called “Italian invert” . . . [This edition] has made a notable contribution by publishing the complete Novel of an Invert with all the subsequent letters, along with critical analyses that make this book an absolute must for readers interested in the subject. Jean-Claude Féray, publisher and chief editor of Quintes-feuilles

The uncensored letters of the young Italian homosexual . . . [are an] autobiographical account inspired by the long tradition of letters sent to great writers by anonymous readers. . . . It is still relevant as a manifesto protesting medical dogma and defending the right to happiness and love between men. . . . This story, now complete, brings the reader inside the shadowy history of desire, seduction, and the hidden passions of a bygone era. Marion Glaumaud-Carbonnier, Centre d’étude sur Zola et le naturalisme, CNRS – ITEM

Foreword to the French Edition by Alain Pagès

Foreword to the American Edition by Vernon A. Rosario

The Ménage-à-trois of Zola, Saint-Paul, and the Italian “Invert” by Michael Rosenfeld with Nancy Erber

The Confessions of a Homosexual

The Novel of an Invert

The Sequel to the Novel of an Invert

Preface to the Second Edition

Remarks on the Sequel to the Novel of an Invert

Conclusions to the Second Edition

Preface to the New Edition

Michael Rosenfeld is a doctoral candidate at the Université Sorbonne Nouvelle – Paris 3 and at the Catholic University of Louvain in Belgium. His thesis is on the representation of homosexuality in public discourse, intimate writing, and literature in France and Belgium from 1870 to 1905.

William A. Peniston is the librarian and archivist at the Newark Museum, as well as a French historian. He is the author of Pederasts and Others: Urban Culture and Sexual Identity in Nineteenth-Century Paris.

Nancy Erber is Professor Emerita of Modern Languages and Literature at the City University of New York. She is the co-editor of Disorder in the Court: Trials and Sexual Conflict at the Turn of the Century and translator of Paul Thorez’s Model Children: Inside the Republic of Red Scarves.